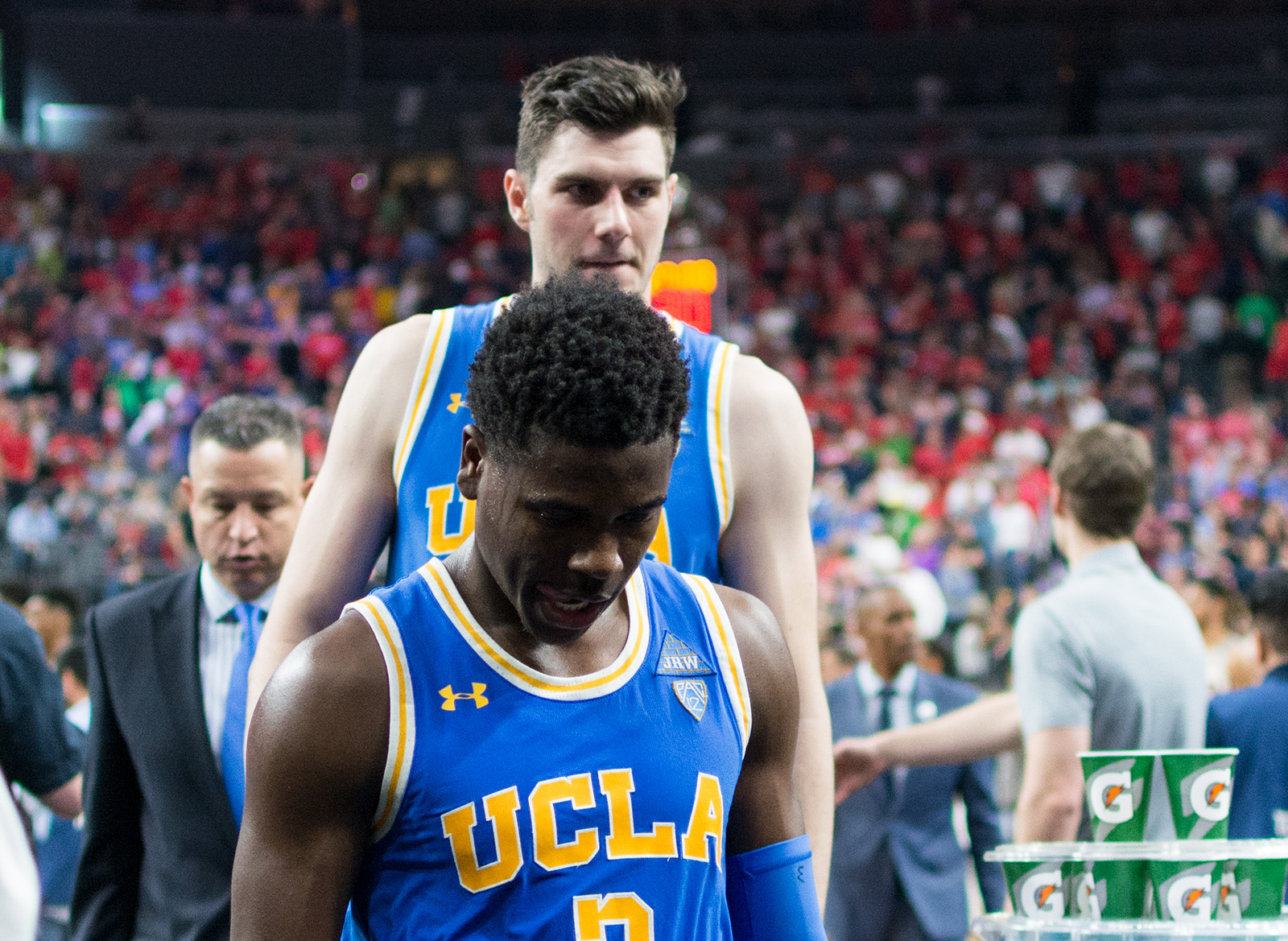 Aaron Holiday did not lead the Bruins in scoring for the first time since their Jan. 20 loss at Oregon. The junior guard failed to lead No. 4 seed UCLA past No. 1 seed Arizona in the semifinal of the Pac-12 tournament. (Hannah Burnett/Assistant Photo editor)

He couldn’t come up with five more good ones.

The senior guard failed to lead No. 4 seed UCLA men’s basketball to an upset over No. 1 seed Arizona at the Pac-12 Tournament semifinals Friday night. Holiday missed his last seven shots and the Bruins did not score in the overtime period, falling to the Wildcats 78-67.

Coach Steve Alford said that the lack of stoppage of play might have played a role in tiring out UCLA.

“(Holiday) just does as much as he possibly can,” Alford said. “(In) 45 minutes, we get him to the line once, and that was late in the second half. So we’ve got to figure out ways of getting him to the free-throw line a little bit more, because I think he’s a handful.”

Holiday totaled 15 points on 5-of-20 shooting, including 3-of-12 from beyond the arc. Thomas Welsh topped the Bruins with 17 points and 17 rebounds, marking the first time Holiday didn’t lead the team in scoring since a Jan. 20 loss to Oregon.

Arizona coach Sean Miller said he didn’t think many guards could defend Holiday for a full 38 minutes the way Wildcat guard Parker Jackson-Cartwright did, and that the rest of the Wildcats supported him. Miller added his team was trying not to let Holiday beat them.

“If Thomas Welsh was going to bang a bunch of 3s, if Wilkes was going to have a big night, maybe we don’t win,” Miller said. “But we didn’t want Aaron Holiday to do to us what he’s done recently.”

Holiday said he felt fine after the game, but was obviously tired from all of the minutes. He gave credit to Arizona’s defense.

“I saw another guy either in the paint or in gap every time I drove,” Holiday said. “So they did a great job on defense getting the ball out of my hands.”

Arizona guard Deandre Ayton led all players with 32 points on 13-of-16 shooting, also pulling down 14 rebounds.

“He’s special, and I thought they did a good job of feeding him,” Alford said. “He made just about everything.”

The late play in the second half was characterized by UCLA’s freshmen forcing their way to the basket. Guard Jaylen Hands fought his way to a layup with eight seconds left in regulation to tie the game and force overtime.

Fellow freshman guard Kris Wilkes came up with a pair of late-game dunks, including a baseline-to-baseline, one-handed slam that tied the game at 60 with under five minutes to play.

“It’s a good experience for them,” Alford said. “(Hands) bounced back. He’s been out with an ankle sprain. … I thought he played with a lot of passion tonight and we needed that out there. And Kris has been consistent all year. I thought he really battled.”

Alford said he felt good about the team’s NCAA Tournament chances. The Bruins will find out whether or not they earned an at-large bid in the NCAA Tournament selection show, which will air at 3 p.m. PDT Sunday on TBS.

“So I think we’ve done enough to show that we pass the eye test,” Alford said. “And I think our body of work proves it.”