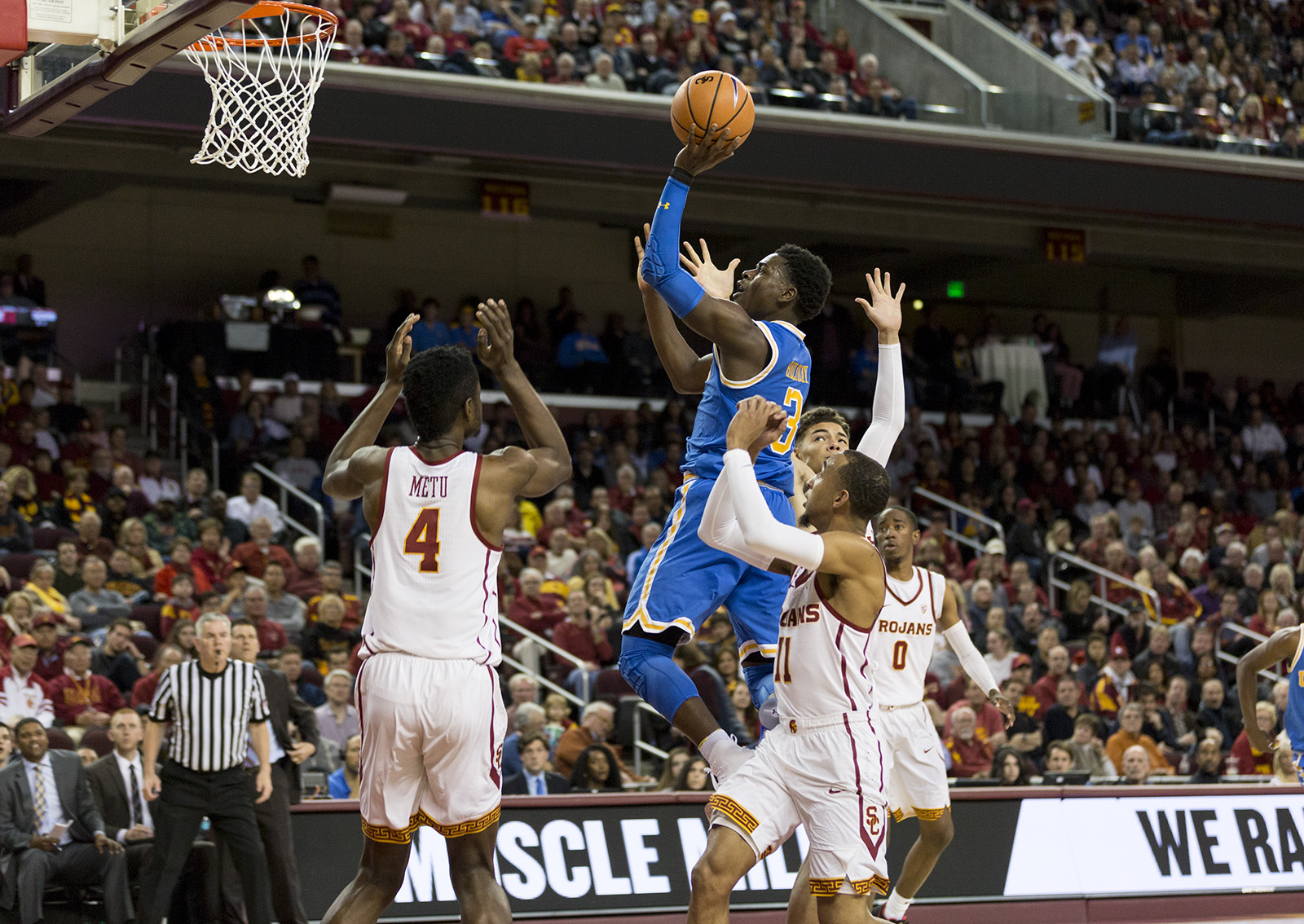 Aaron Holiday ranks within the top 20 for minutes played per game this season and will lead his team at it starts its run in the Pac-12 Tournament against Stanford on Thursday. (Amy Dixon/Assistant Photo editor)

Aaron Holiday can’t get a break, but he doesn’t want one either.

The junior guard has played at least 40 minutes in 10 games, plus three additional games in which he’s played 39 minutes. He ranks within the top 20 nationally in minutes played per game, but there’s still plenty of juice in UCLA’s Energizer Bunny.

“He doesn’t like to get subbed out in practice either, so it just really carries over to the game,” said redshirt sophomore guard Prince Ali. “He’s never really been known to get tired, so that’s just what he does.”

UCLA lost the teams’ first meeting, a double-overtime thriller in which Holiday played 48 out of a possible 50 minutes. But in a rematch in January, Holiday scored 21 points in 39 minutes of an 89-73 victory.

And as long as the Bruins keep winning, coach Steve Alford doesn’t envision sitting next to his star guard on the bench.

“If we’re able to advance, it’ll be 40, 40, 40,” Alford said of the number of minutes he plans to play Holiday each game. “He’s conditioned – not just physically – he’s conditioned mentally to however long you play. … He’s played beyond 40 minutes, so we’ve got all the confidence in the world in him.”

Holiday is indispensable as a player to his team, especially since UCLA has been on the precipice of earning an at-large bid.

After the Bruins lost both of their games on the Oregon trip, Holiday has been averaging 38.7 minutes per game, shooting 50.7 percent on 3-pointers and 49.6 percent total and scoring 22.6 points per game.

“Personally, I think he should’ve been the Pac-12 Player of the Year,” said senior center Thomas Welsh. “He’s just an animal out there.”

Holiday scored a career-high 34 points as UCLA completed a season sweep of USC on Saturday, which helped the Bruins’ status on the NCAA tournament bubble. Bracket Matrix lists that they are included on 96 of 102 brackets around the country with an average seed of 10.60, but Alford’s squad could still use more help on its resume.

Winning the conference tournament and securing the Pac-12’s automatic bid, or at least reaching the finals by upsetting No. 15 Arizona, is the safest bet to reach the Big Dance, but it’s no sure thing.

Since the tournament moved to Las Vegas in 2013, only top-three seeded teams have won the automatic NCAA Tournament bid. All but one of the winners have been a No. 1 or No. 2 seed – including UCLA in 2014.

But if there’s any team in a particular year that can surpass that barrier, it may be the Bruins, who own a collective 4-1 record against Arizona, USC and Utah, the three teams seeded above them.

Improving that mark would serve as a favorable closing argument for the Bruins’ NCAA Tournament resume, since the Pac-12 Tournament ends the day before Selection Sunday.

“You’ve got the enthusiasm of what March is but as we’ve told our guys, March also brings a finality,” Alford said. “It’s about doing what you do the best that you can and knowing that there’s got to be an urgency to every possession and the lessons that you’ve learned through the course of the season, you’ve got to make sure those are being applied because you don’t want to be learning lessons in March.”

The biggest lesson – one that UCLA has yet to grasp over the course of the regular season – is the concept of playing a full 40-minute game.

On several occasions this year, Alford has bemoaned stretches when his team wasn’t focused on defense and let the opposing team go on prolonged runs. And in the Bruins’ key wins, he has highlighted the defense’s role in getting the team’s offense on a roll.

“I think this team will be as good as our defense allows us to be,” Welsh said. “And I think a lot of that will just be how our effort is, how we talk, how we communicate on the defensive end.”

All hands on deck

Freshman guard Jaylen Hands has been practicing after missing Saturday’s game with a sprained right ankle but did not wear a brace or have a noticeable amount of tape around his ankle Tuesday.

Alford said Hands has been able to ramp up his workload day by day. After getting his ankles broken by a crossover from senior guard Alec Wulff, Hands was running up and down the court and got up without a limp Tuesday. Alford said Hands’ status would be a game-time decision depending on how he looks Thursday morning.