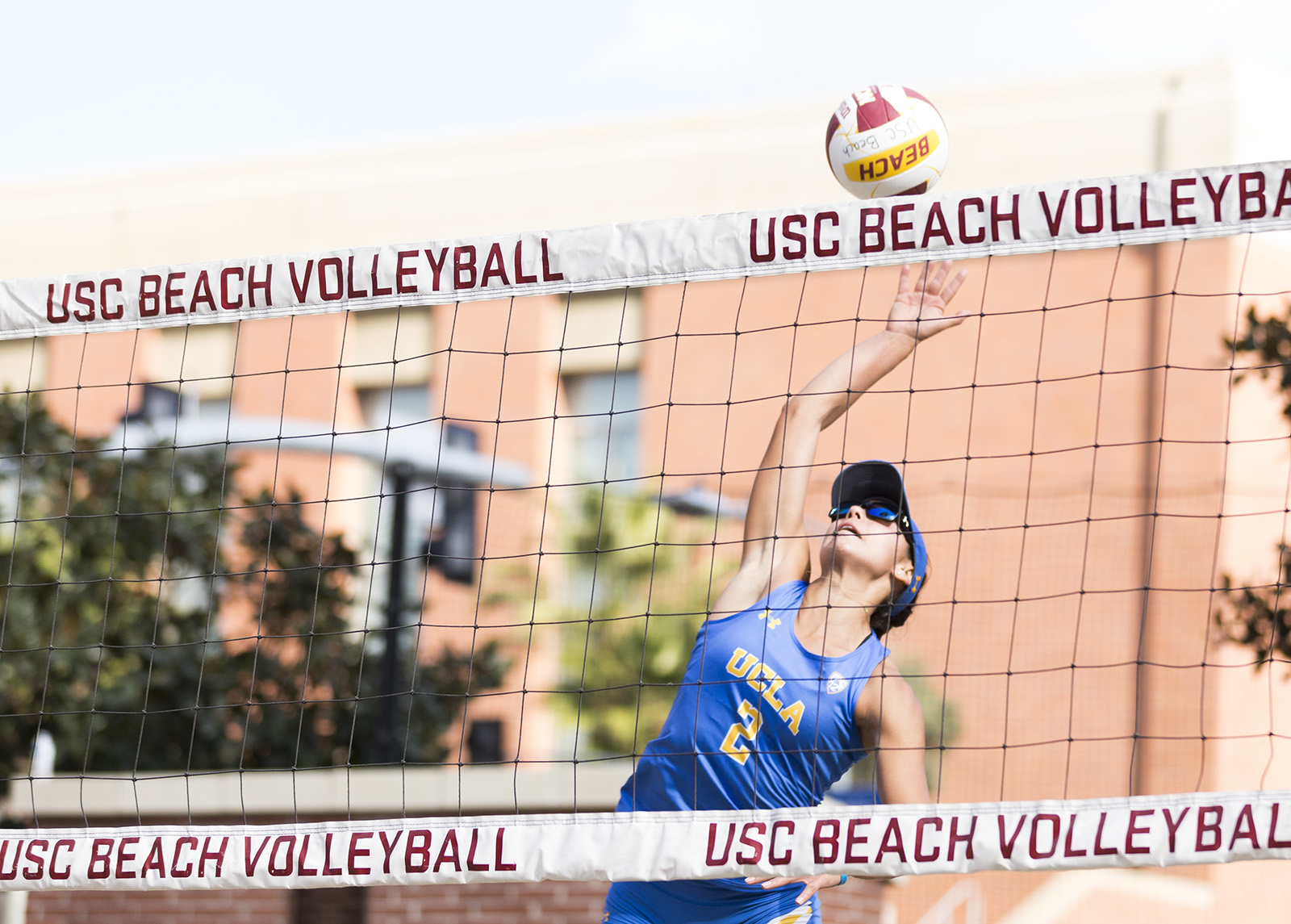 Lily Justine defeated a pair from USC with partner Sarah Sponcil in the Bruins’ loss to the Trojans last weekend. The UCLA duo fell to the team from Pepperdine and looks to recover in its matches Thursday. (Aubrey Yeo/Daily Bruin senior staff)

After a rocky start to the season due to battling the wind, the Bruins will compete at home for the first time.

No. 4 UCLA beach volleyball (5-3) will host both No. 3 Hawai’i (3-1) and No. 17 Loyola Marymount (4-2) at Sunset Canyon Recreation Center on Thursday with the opportunity to bounce back after dropping two matches.

“We’re excited to play at home (because) we tend to have pretty deep sand so ball control is at a premium,” Metzger said. “You have to control the ball well in order to be effective and I think that’s what we do well, so we’ll have a slight edge when we play teams that don’t control the ball well.”

UCLA has already taken on Hawai’i twice this season at the Rainbow Wahine Classic on Feb. 24 and 25 in Honolulu. The two teams split their two meetings, so sophomore Savvy Simo said both teams are familiar with each other.

“Instead of worrying so much about what the other team is doing (and) what lineup they’re playing … we’ve got to come out ready to go right out of the gate,” Simo said.

Hawai’i has only faced UCLA and then-No. 16 Stanford so far this season, and its only loss has been to the Bruins. Metzger said the team has enjoyed a five-day break to prepare for the Rainbow Warriors.

“It’s going to be another one of those matchups where it’s going to come down to two swings,” Metzger said. “Hawai’i beat us the first time, we beat them the second time, (so) it’s a toss-up.”

In the first match, the Bruins were swept 0-5, but they were able to implement adjustments to win 3-2 the next day.

“We struggled the first day but came back the second day,” said sophomore Lily Justine. “It’s really just a matter of who can plan and adjust better.”

For the first eight matches this season, Justine paired with junior transfer Sarah Sponcil, who transferred from LMU and also played indoor for UCLA earlier this year.

As a Lion last season, Sponcil was named WCC Player of the Year and posted a 20-11 overall record in 2017. She boasts a 5-3 record alongside Justine so far this season at UCLA.

The Bruins will be the Lions’ highest-ranked opponent so far this season. LMU’s two losses have been to then-No. 19 Washington and then-No. 12 Grand Canyon.

“I’m really excited,” Justine said. “Home matches are great because we can get a lot of our family, friends (and) fans out there, get loud and really get fired up for the game.”