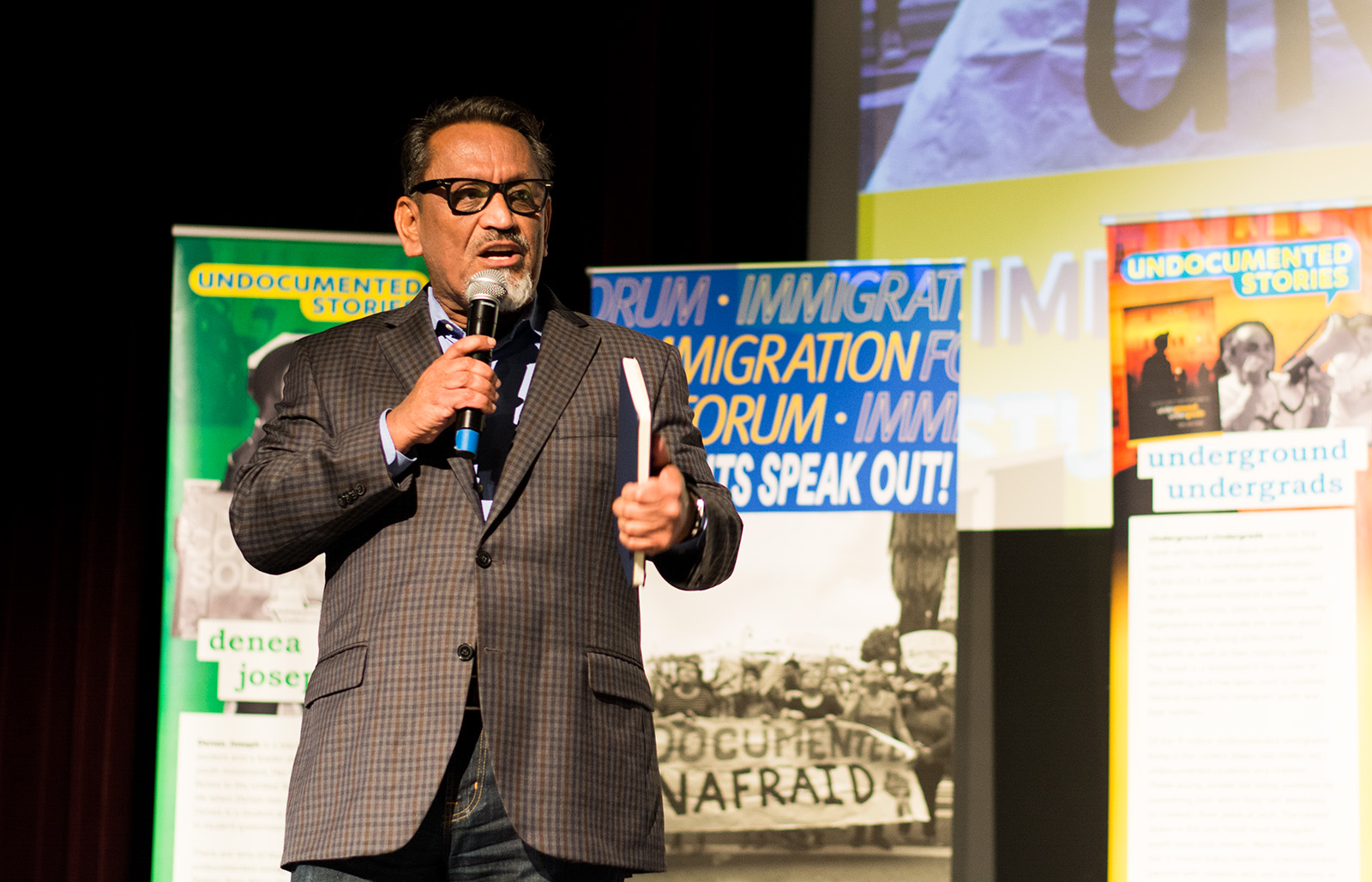 Gilbert Cedillo, a city councilmember who helped write the California Dream Act, said he thinks the immigrant community should help Democrats gain a majority in Congress in 2018. (MacKenzie Coffman/Daily Bruin)

National and local elected officials led about 300 people in chants of “Student power,” “This is what democracy looks like,” and “We are light, learners, leaders,” at UCLA’s Northwest Campus Auditorium on Monday evening.

The class, taught by Maria Ignacia Rodriguez, has about 120 students and focuses on the immigrant rights movement. Kent Wong, director of the UCLA Labor Center, said Rodriguez was one of the first undocumented students to graduate from the UCLA School of Law and said he thinks she has been an inspiration for students interested in activism.

Wong added the event coincided with the date that the Deferred Action for Childhood Arrivals program was going to be revoked. In September, President Donald Trump announced that DACA, which deferred deportation for undocumented individuals brought to the United States as children, would end March 5.

However, following a federal court order, DACA recipients can continue to renew their status while courts review lawsuits against the Trump administration’s decision to end the program.

“This day … was the day Donald Trump hoped to kill DACA and crush the dreams of 700,000 DACA youth across the country,” Wong said. “We are here today to tell him he will never crush those dreams.”

Councilmember Gilbert Cedillo, who helped author the California Dream Act when he was in the state Legislature, said he thinks the immigrant community has a responsibility to help the Democrats gain a majority in Congress in the 2018 midterm elections because the party supports immigration reform.

“We have to be strategic: Elections matter,” he said. “I’m all for protests, but I’m also for winning elections because those votes count the most.”

The California Dream Act, which passed in 2011, gives undocumented students the right to attend college in California and pay in-state tuition.

Hilda Solis, a Los Angeles County supervisor who served as secretary of labor under former President Barack Obama, said she thinks undocumented individuals in Los Angeles should share their stories with the public to create awareness and support for immigrant rights.

“What President Trump wanted to do was wipe us all off – the solution is going to be that we continue to advocate for having our voices heard and demonstrating the power we all have,” she said. “It is so important for our county, our city government, our state government, our places of learning, to understand the value of people in our community having access to education, clean water and jobs.”

Alejandro Núñez Gutiérrez, an undocumented fourth-year Latin American studies student and one of the event speakers, said he thinks DACA creates a division between DACA recipients and undocumented individuals not protected by the program.

“It’s not comprehensive and it’s not inclusive,” he said. “If you have DACA, do not fall into the Dreamer narrative, that you should not pay for your parents’ sins. Your parents are the dreamers who brought you here.”

Marina Mireles, one of the students who helped organize the event, said she liked that students in the class were able to direct what the event focused on.

“We were really getting a lot of freedom to choose what we wanted to talk about and highlight within the current political climate,” she said.

Wong said he is hopeful that students interested in activism will be able to enact change in California and nationwide.

“This spirit that you are carrying in this room will push you through the months ahead. We will win justice and dignity for immigrant workers and we will celebrate that day together,” he said. “We will celebrate when we have a society that truly represents the best of what our people can be.”