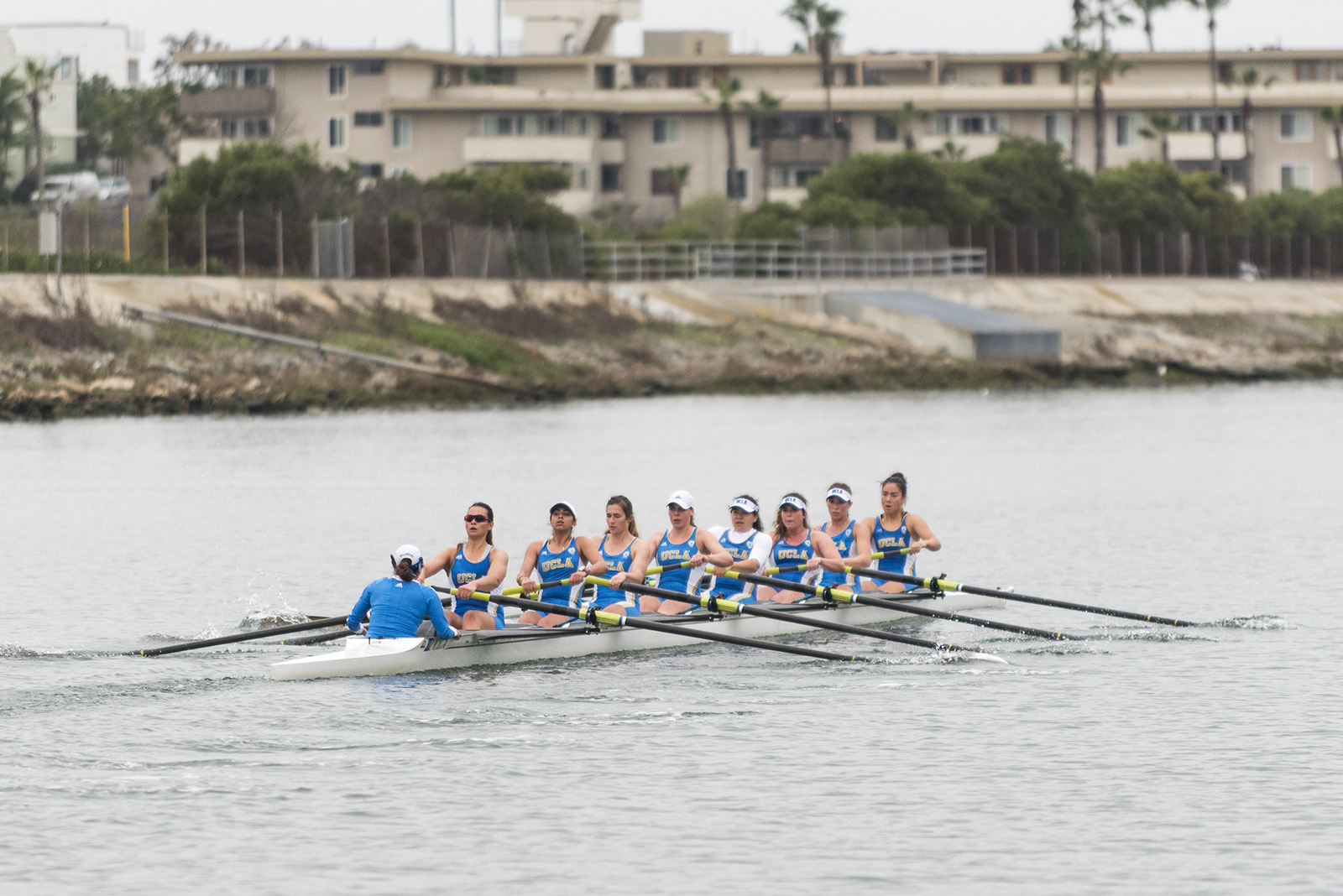 In their first meet of the year, UCLA rowing took home just one win against Stanford in the second varsity eight-man race. It was by the slimmest margin of the weekend, as well. The Bruins’ losses came in with much bigger time gaps between them and the Cardinal. (Daily Bruin file photo)

It was clear from the beginning that UCLA rowing’s first meet of the season was going to be a lively one.

However, one of the first races of the day, the varsity four race, had an unusual ending: They didn’t finish at all.

The Bruins’ boat stopped abruptly more than halfway through the event for no apparent reason. The crowd at the event was confused, and the event’s announcer, trying to figure out what was happening, declared that the spectators “were in for a drama-filled day.”

The only thing that was clear was that the varsity four boat would have to wait another two weeks to complete their first official race of the season.

“Sadly, the four had breakage,” said coach Amy Fuller Kearney. “They didn’t get to finish the race, but, this early in the season that’s not too bad.”

The race had originally been stopped when it seemed a bag was stuck to the boat’s rudder. On the second time around, it became clear that there was a more serious problem.

“During the second attempt they couldn’t straighten the boat out, so they couldn’t steer.” Fuller Kearney said. “In rowing, anything after 100m, if it breaks, it’s too bad. And it was at 750 meters. We wanted (Stanford and San Diego State) to be able to finish their race and not start them over again.”

After the chaotic start, the second varsity eight boat was able to nudge out Stanford, winning the race with a time of 7:06.10 to the Cardinal’s 7:08.56 in what was the closest finish of the event.

With Stanford finishing last season ranked No. 6 in the nation, it was a surprising win for the Bruins and their only one against the Cardinal.

“They’ve been a little bit inconsistent in training, so for them to come out today, it showed their potential,” Fuller Kearney said. “I thought that was exciting.”

The energy died down by the end of the final race, as the varsity eight boat lost by a wide 37-second margin.

“It wasn’t our best kind of racing, for the (first varsity) anyway. I know the (second varsity) had a very great race,” said junior varsity one starboard Kyra Edwards. “We’re a bit disjointed in the top boat, I’d say … we’ve got things to improve on. It wasn’t the best we can do, but it was a good start, I guess, so we’ll see where we go from here.”

Despite the performance, the team seemed determined to stay positive.

“It’s definitely something we can build off,” Budgett said. “We have a lot more coming.”

“I thought it was a pretty good starting point for us,” Fuller Kearney said. “It’s super early and we’re still trying to figure out lineups and race pace. We just wanted to go out there and work hard and put our best foot forward.”

The team will compete again in a scrimmage against Loyola Marymount on Saturday, before being visited by Oregon State on March 17.