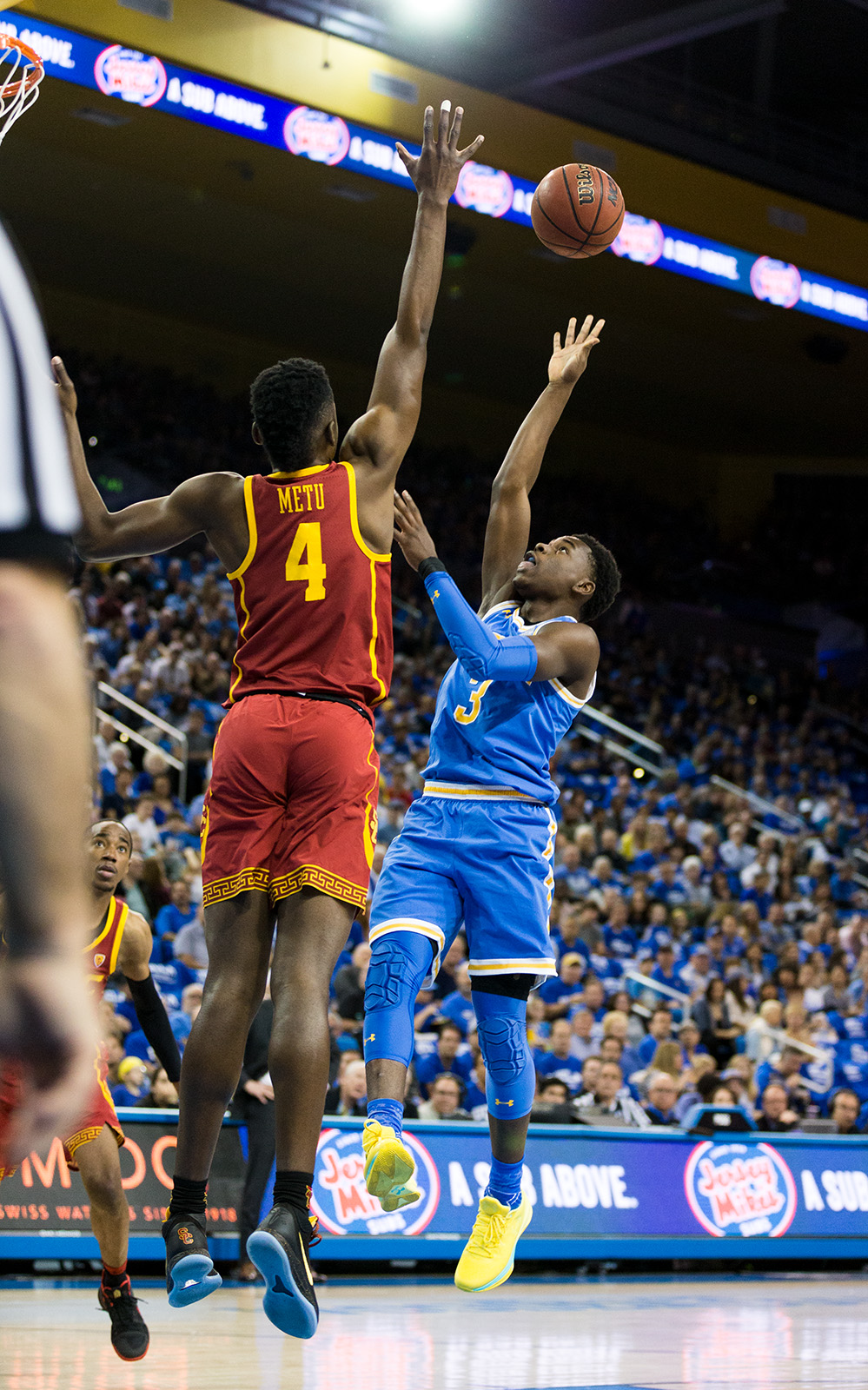 Junior guard Aaron Holiday and UCLA men’s basketball will close out regular season conference play with a visit to USC on Saturday. The Pac-12 tournament is set to begin next week in Las Vegas. (Aubrey Yeo/Daily Bruin senior staff)

When UCLA men’s basketball beat USC on Feb. 3, Reggie Miller joined the Bruins in the locker room afterward, everybody clapping and hooting and hollering about the exciting 82-79 win over the Trojans.

Fast forward a month. If UCLA can once again conquer USC, the Bruins can likely take a sigh of relief.

After suffering two disappointing losses on last week’s road trip to Utah and Colorado, UCLA is on the outside looking in of most NCAA Tournament bracket projections and is in dire need of a win Saturday at USC.

A win would also clinch a bye for the Bruins in the first round of next week’s Pac-12 Tournament, meaning they’d only need to play three games in three days rather than four games in four days.

“Having that in mind will add a little extra fuel to the fire heading into this game,” said senior center Thomas Welsh. “It’s definitely a big difference in terms of winning four games in four days versus winning three games in three days.”

The key matchup Saturday night figures to be at the point guard position, where Bruin junior Aaron Holiday will face off with Trojan Jordan McLaughlin.

Holiday is averaging 19.6 points and 5.8 assists per game, both second-best in the Pac-12. He’s far outpaced, though, in the passing column by McLaughlin, who averages 7.6 dimes a night, the fourth-most in the nation.

“(McLaughlin) has been terrific throughout his career and he’s having a really good senior year,” said coach Steve Alford. “He’s the catalyst of what (the Trojans) do. He makes them go because he sets everybody else up.”

McLaughlin averages fewer than three turnovers per game to go with his high assist total, helping drive a USC offense that ranks No. 21 in the nation in efficiency, per KenPom.com, in large part because of its ability to take care of the ball.

“It’s crazy, his assist-to-turnover ratio, and he’s got the ball in his hands a lot,” Alford said. “To make that many good plays when you’re handling the ball as much as he handles it – he values possessions.”

If anyone in the conference is up to the task of handling McLaughlin, it’s probably Holiday, who was recently listed as one of the 16 most valuable players in the country by CBS Sports.

“(Holiday’s) just having one of those special years,” Alford said. “(Holiday) has been our leader from the get-go and it’s amazing what we’ve asked him to do this year from score to make 3s to drive the ball to create for others to guard the (other) team’s best guard.”