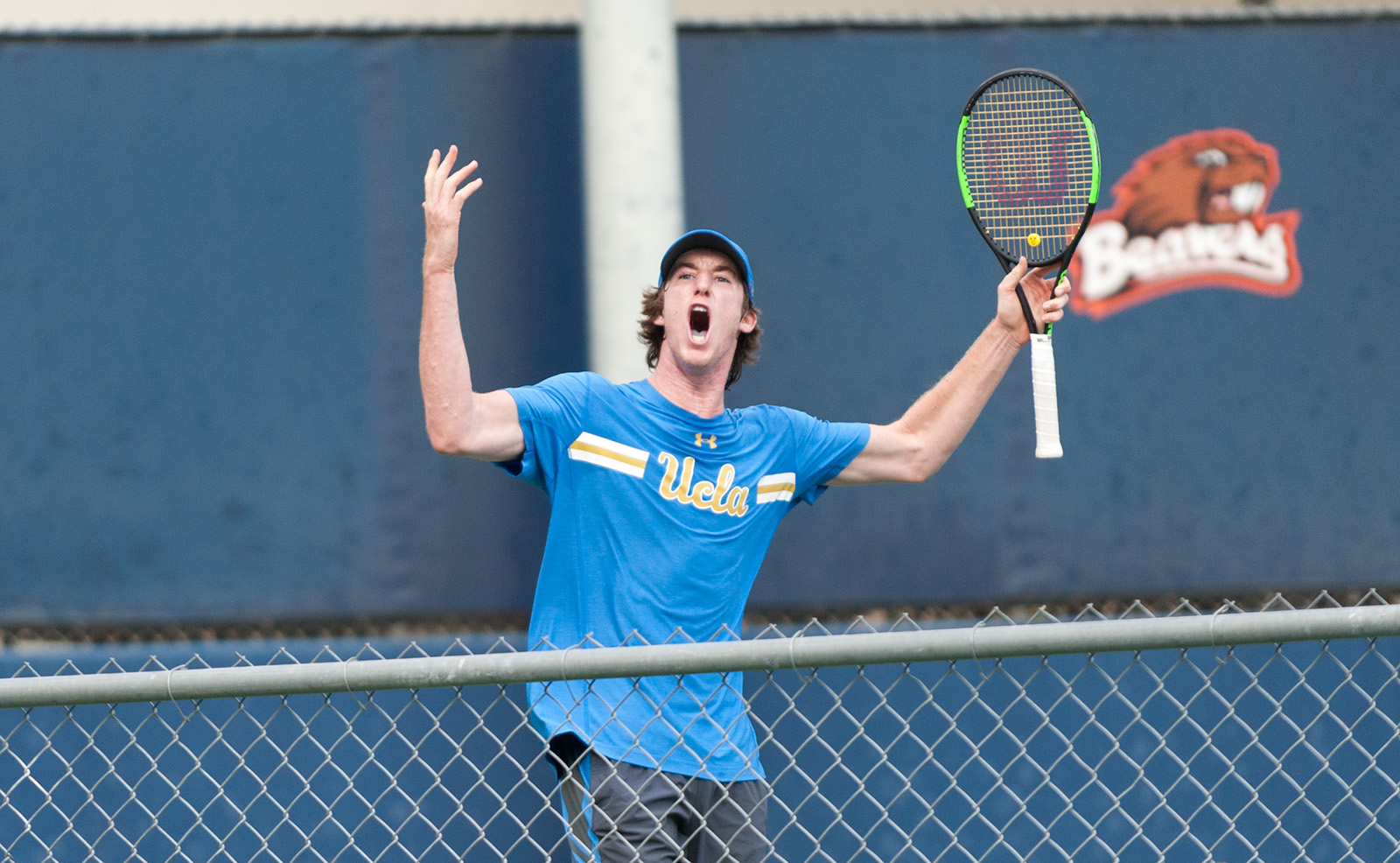 Keegan Smith was victorious in singles to help UCLA defeat USC on Tuesday. The freshman and his partner senior Austin Rapp also took home a doubles win to help the Bruins get the doubles point. (Alice Naland/Daily Bruin)

The Trojans looked to break the Bruins’ undefeated record at home – but UCLA didn’t let that happen.

“It’s special not only for me as a coach and my players as a team, but (for) our school,” said coach Billy Martin. “(This match is) always under a microscope a little bit so (we) feel really relieved when we can get a win for UCLA over the Trojans.”

The match got off to a quick start in doubles as freshman Keegan Smith and senior Austin Rapp swept their Trojan opponents. It came down to courts one and three and junior Maxime Cressy and freshman Bryce Pereira prevailed, securing the doubles point for UCLA.

“We started off really strong,” Cressy said. “We were fired up and that really helped us.”

The Bruins have now won the doubles point in their last seven matches.

“Doubles has really been our standout,” Martin said. “One through six, our guys are really playing well. (If) one day somebody doesn’t win, the next day they come back and win.”

Heading into singles, the Bruins dropped their first sets on courts one, two and four, but freshman Connor Hance, Cressy and Smith took home wins.

Smith rallied back from a 5-4 deficit to win the opening set 7-5.

“Winning the first set was definitely big,” Smith said. “It was back and forth, but then I got the break I was just feeling it.”

Smith and Hance won their second sets to give UCLA a 3-1 advantage, but USC didn’t back down.

Sophomore Evan Zhu was defeated by Daniel Cukierman on court two and senior Logan Staggs was taken down by Laurens Verboven on court four to get the Trojans within one. The match came down to the third set for Cressy on court five and senior Martin Redlicki on court one.

With a 6-3 win, Cressy clinched the match.

“I was just focusing on point by point and I stayed calm,” Cressy said.

After competing in the ITA Division I National Men’s Team Indoor Championship last weekend, Smith said it was difficult to readjust to the outdoor elements.

“It was hard out there today,” Smith said. “Indoors is way different tennis, so to come out here only a week later and take out USC who’s an unreal team, I’m super pumped.”