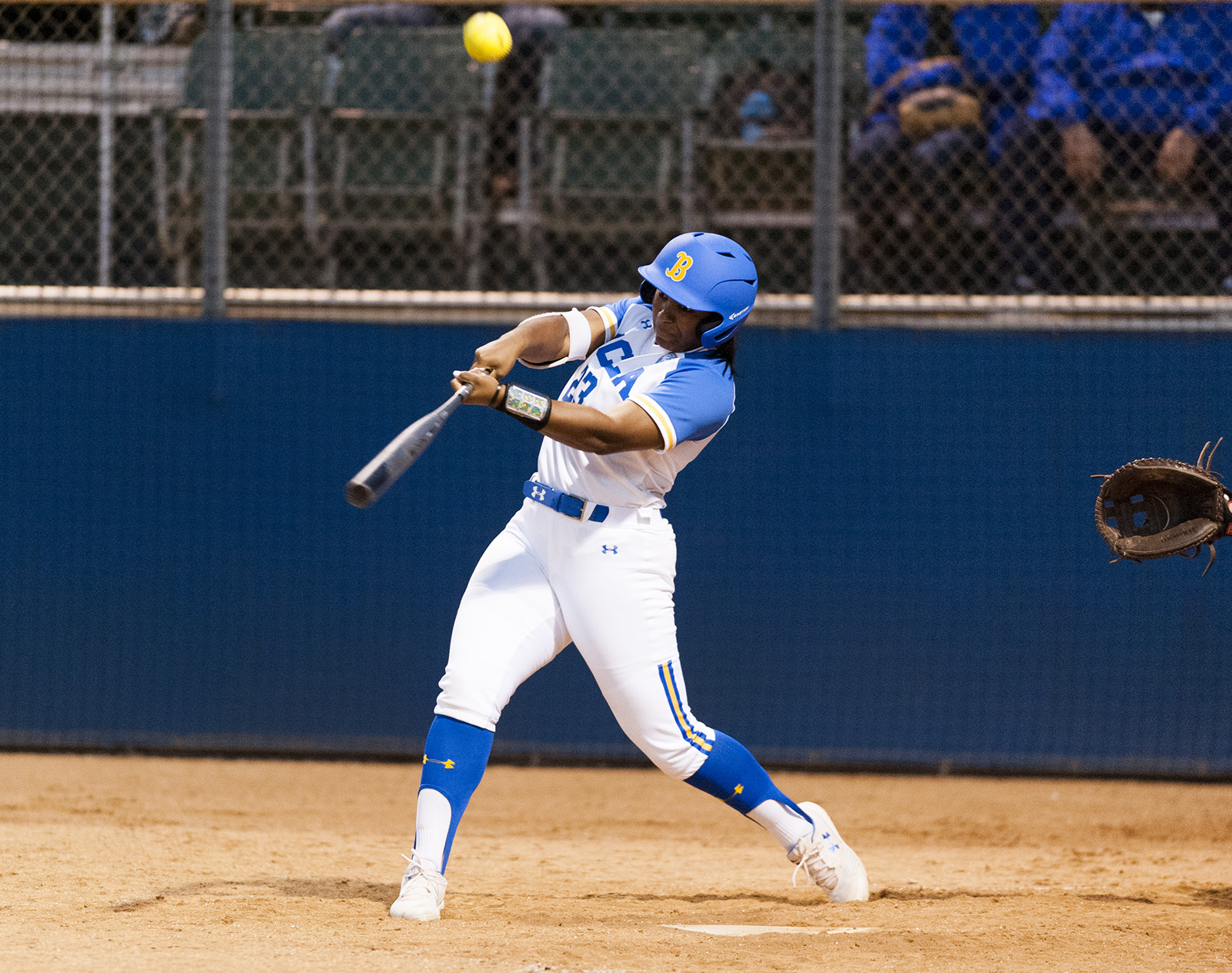 Redshirt freshman outfielder Aaliyah Jordan came up big Friday with a home run in both of the Bruins’ games. Her second of the night put UCLA atop Liberty to help them secure the win. (Jenna Smith/Daily Bruin)

The Bruins got their first taste of ranked competition this weekend.

Last year, the Bruins were defeated by the Tigers 1-2 in the NCAA Women’s College World Series by a score of 2-1. This year, coach Kelly Inouye-Perez said UCLA came back with every intent to win and redeem itself.

“It was nice to be able to get a statement game like that (against LSU),” coach Inouye-Perez said. “We felt we had a good game against them in the world series and should have had that ‘W,’ so we wanted it to be a decisive win.”

The Bruins kicked off the weekend Friday, first facing the Cornhuskers and then the Eagles.

Redshirt sophomore pitcher Rachel Garcia was on the mound against the Corn Huskers and remained nearly perfect, shutting Nebraska out and allowing them to tally just two hits – three being the most she’s allowed in any game so far this year.

Redshirt freshman outfielder Aaliyah Jordan opened up the scoring for the Bruins with a home run to straightaway center. Garcia and freshman infielders Malia Quarles and Briana Perez each logged a single RBI to help the Bruins top the Cornhuskers 5-0.

Later that same day the Bruins faced off against the Liberty University Eagles with senior pitcher Joannah Grauer starting. She was relieved by senior Selina Ta’amilo after just three innings, however.

Grauer gave up all three of the Eagles’ runs in the first three innings, and the Bruins were down 2-3 going into the fifth.

Down to the last out of the inning, senior infielder Kylee Perez tripled to right field. The next at-bat, Jordan came up big once again, hitting her second home run of the day to make it a 4-3 game, and that’s where the score would stay.

The Eagles logged more hits than any other team the Bruins faced over the weekend, tallying six in total.

“I felt good (Friday),” Jordan said. “I was just trying to be aggressive. I think (later in the weekend) I got a little too much in my head.”

On Saturday, the Bruins played just one game, but it was against their only ranked opponent so far this season – the LSU Tigers. Garcia – just as she did the last time the two teams faced off – started on the mound. This time, however, she turned in yet another two-hit performance.

Both of the Tigers’ hits came in the fourth inning. LSU’s infielder Amber Serrett was walked, advanced to third on a double by infielder Becca Schulte and scored on a fielder’s choice.

But it was too little, too late for the Tigers. By the time they scored their lone run, the Bruins already had five to their credit, and by the end of the fifth inning the four-run delta grew to eight.

Five different Bruins generated RBIs that game, and LSU was sent home after just five innings with a final score of 9-1.

“It all starts with how my pregame warmup goes,” Garcia said. “Lately, I’ve been staying nice and relaxed and I’ve been having fun.”

Come Sunday and the Bruins had back-to-back games against Missouri and Fresno State.

Freshman pitcher Holly Azevedo took to the mound for the game against Mizzou and turned in 3 1/3 innings before being swapped for Garcia. In total, the two allowed just five hits and no runs.

The Bruins shut out the Mizzou Tigers 4-0 with help from Kylee Perez, Garcia and sophomore utility Bubba Nickles – all of whom drove in a run.

Later that same day against Fresno State, the Bruins’ bats were at it again. Briana Perez and junior catcher Taylor Pack both batted in three runs apiece and pitchers Grauer and Ta’amilo allowed a combined five hits. The Bruins defeated the Bulldogs 7-3.

A combination of seven different Bruins were responsible for the team’s RBIs this weekend, and nine are hitting over .300 so far this year. Inouya-Perez said the Bruins have not been reliant on just one pitcher or hitter to score or make a big play.

“We have the ability not to have to ride one person or that person playing all the time,” Inouye-Perez said. “We have faith in the people that are substituting in, too.”

With the third weekend of the season all said and done, Inouye-Perez said she’s going to give the girls the next two days off so they can focus on other activities and stay fresh.

The Bruins will head back to the diamond Friday and will play another five games over three days at the San Diego Classic I.