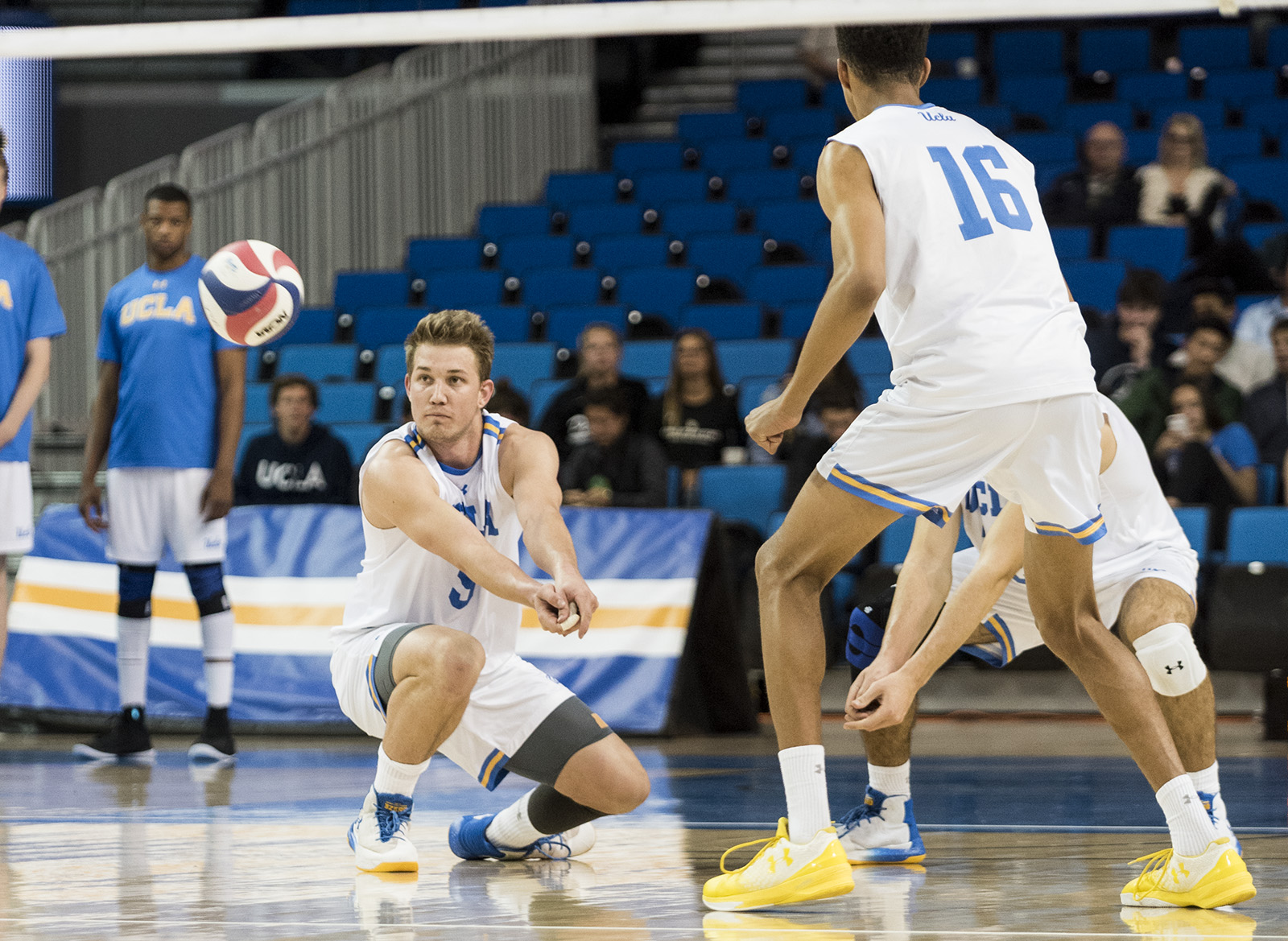 Senior setter/outside hitter JT Hatch led UCLA with 13 kills on the night and also added 10 digs.
Hatch hit .379 on the night, a marked improvement from his hitting percentage of .208 in the Bruins’ first bout with the 49ers. (Isabelle Roy/Daily Bruin senior staff)

Freshman opposite Grant Maleski had only one kill on the season before the match against the number one team in the country. He finished with 14.

The Bruins started Maleski in place of leading scorer senior opposite Christian Hessenauer, who did not appear in the game. Hessenauer is reportedly out with a knee injury and coach John Speraw didn’t know when he would return. Maleski faced Long Beach State’s leading scorer outside hitter TJ DeFalco throughout the night.

Maleski carried a large portion of the workload, finishing with 13 kills off of 33 attempts. Sophomore middle blocker Daenan Gyimah noted his great work at filling in during Hessenauer’s absence.

“Well, I mean I hope (Hessenauer) is OK. (Maleski) is a great player and did a great job,” Gyimah said. “He’s going to be so good when he gets bigger and stronger and is around the game more.”

The first set started with the two teams in a gridlock for the lead. There were two lead changes and eight ties, but Long Beach State took the set 25-21.

The quickness and efficiency of the 49ers’ attack was on display in the first set in which they hit for .516. Long Beach State only had two attacking errors, both of which were blocks by UCLA. DeFalco led the 49ers with five kills in the set, hitting for .714.

DeFalco and opposite Kyle Ensing contributed massively to the 49ers’ attack with 23 and 19 kills, respectively. Speraw commented on how difficult it is to beat Long Beach State because of their presence on the team.

“They set a lot quicker tonight. They went back to the middle a lot more and it’s about their big two guys,” Speraw said. “But I mean it’s 40 attempts for Ensing and 36 for (DeFalco) when they hit for .500 and .400, and when their two guys are hitting that well, it’s hard to beat that team.”

The set finished with a low dig from 49er setter Josh Tuaniga to the arm of middle blocker Simon Anderson, with a deep kill into the corner of the Bruins’ court.

UCLA continued to try to find its way through the Long Beach State defense with lineup changes throughout the match.

“Basically we were trying different things,” Maleski said. “Whether that be me blocking on the right and on the left. We were trying a lot of different strategies, because this game is an important one – it’s about what we learn.”

Set two was similar to the first at the beginning. After coming back from being down 2-1, the 49ers held the lead until 14-13 when senior outside hitter JT Hatch hit a searing downward kill from a hard angle, leading to a Long Beach State timeout.

UCLA extended the lead to 4 points with four consecutive Bruin kills from Maleski, who led the Bruins with five kills in the set. UCLA took the set 25-23.

The Bruins took the lead at the start of the third set, but this was canceled out by a 49er 5-point run, including a bullet kill from DeFalco from the middle of his own side, tearing through the middle of the UCLA front three.

“We faced a more evenly distributed offense,” Gyimah said. “I mean, (DeFalco) has his kills but they set a lot more quick which was a challenge. I think we did a good job at playing the odds with the block and then defending around it.”