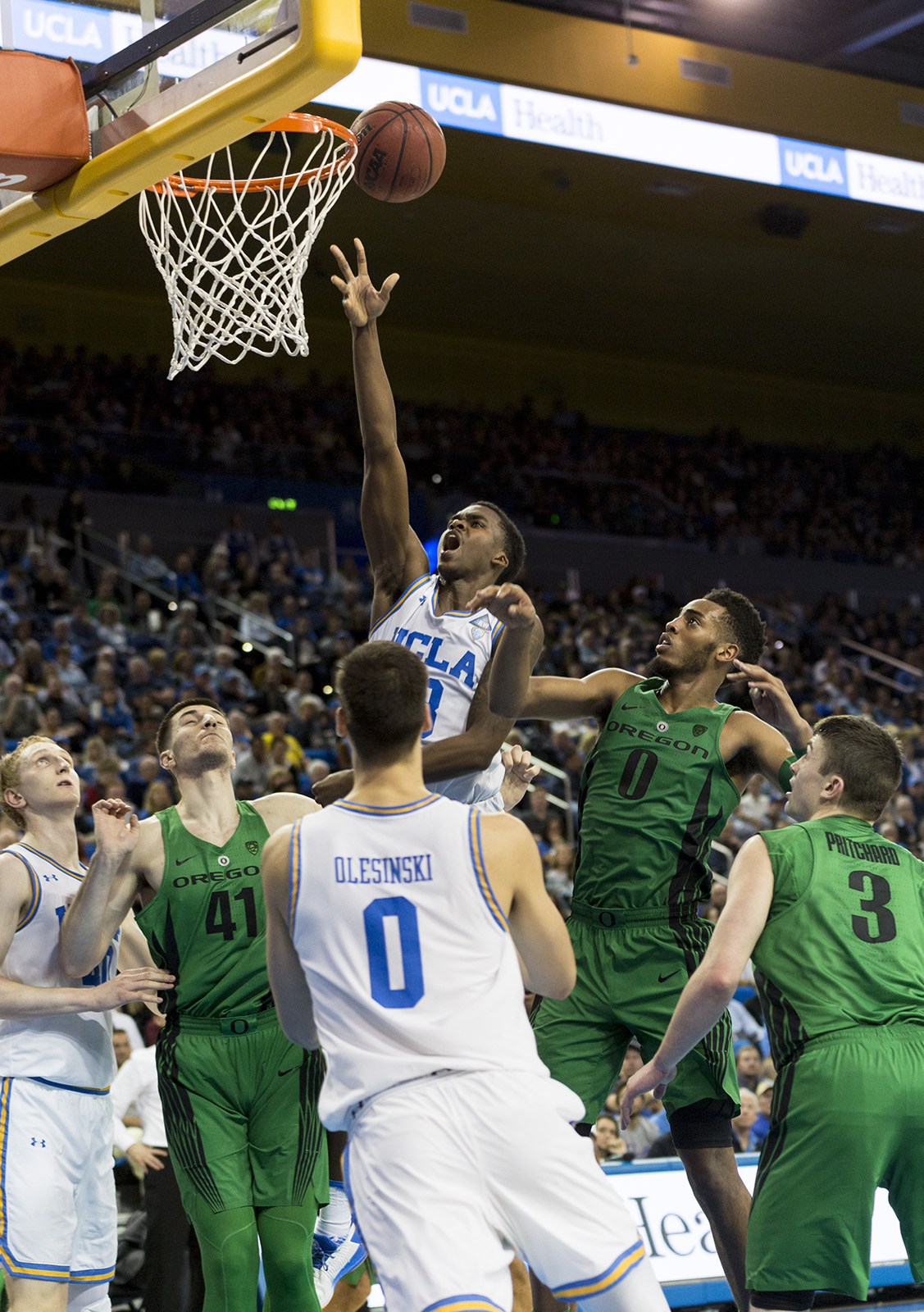 Freshman forward Kris Wilkes said his body is prepared for the upcoming elevation after he spent two summers in Colorado during high school. The Bruins are currently a bubble team for the NCAA tournament and need wins to boost their resume. (Amy Dixon/Assistant Photo editor)

Less than three weeks remain until Selection Sunday, and UCLA’s NCAA Tournament chances are still as murky as they were at the beginning of the season.

Part of the reason for the uncertainty is a lack of significant wins over top-notch nonconference opponents, but the overall lackluster state of the Pac-12 is also a factor.

That leaves UCLA (19-8, 10-5 Pac-12) scrapping for a favorable seed for the Pac-12 tournament in hopes of a last-minute NCAA Tournament resume boost. One of the teams battling the Bruins is Utah (17-9, 9-6), which is among the four teams within one game of UCLA in the loss column.

That’s why the pressure is on coach Steve Alford’s team as it prepares for a high-altitude road trip starting Thursday in Salt Lake City and continuing Sunday at Colorado.

“They have really good environments, some tough environments for road teams to come in and play,” said senior center Thomas Welsh. “I think the altitude definitely makes a little difference as well, but at the end of the day it’s just about the guys they have on the court.”

Two of those players plagued UCLA inside and outside of the paint in the teams’ previous meeting in January.

Forward David Collette, the Utes’ second-leading scorer, put up a team-high 15 points on 7-of-11 shooting, including 10 points in the paint. Guard Justin Bibbins, who ranks second in the conference in 3-point shooting percentage and 3-pointers made, hit four of his eight attempts from long range, but junior guard Aaron Holiday held him to only 12 of those points.

Holiday again will draw Utah’s premier perimeter threat, Bibbins, as his defensive assignment. Alford campaigned for his point guard as one of the two players deserving of the Pac-12 Player of the Year award following Saturday’s win over Oregon because of his defensive impact.

“It doesn’t matter who we play, whoever the key guard is on that team, that’s who (Holiday’s) defending and he’s done that all year long and he’s done it at a really high level,” Alford said.

What Alford regarded with a level of disbelief was the fact that Holiday was left off the late season top-20 watch list for the Wooden Award, given to college basketball’s most outstanding player, and the list of 10 finalists for the Bob Cousy Award, given to the country’s top point guard.

“There’s nothing any committee or anyone else that can tell me otherwise,” Alford said. “It makes zero sense that he’s not on the talk as one of the top-five point guards in the country.”

It wasn’t just Holiday who lit up Utah in January – all of UCLA’s starting backcourt performed at a high level. Holiday, redshirt sophomore Prince Ali and freshman forward Kris Wilkes combined to drop 52 points on 20-of-30 shooting, by far the trio’s single most efficient game showing.

While the altitude adjustment might be tough for most newcomers, Wilkes isn’t one of them. He participated in Team USA basketball training camps the last two summers in Colorado and he said the difference doesn’t faze him anymore.

“When I first went down there, it was tough for a couple days, but then when I went down there the second time, after the first day of just running up and down the court, I got used to it,” Wilkes said. “I already knew what was coming, so I went hard the first day and got it all out, and when the second day came it was pretty cool, didn’t bother me at all.”

Wilkes set a season high with 40 minutes against Oregon, while Holiday leads the Pac-12 with an even 1000 total minutes played. But going into the last two weekends of the regular season, Alford might not have a choice but to leave his two leading scorers in the game as long as he can.

If the Bruins fail to win a game on this road trip, an opportunity to play where it really counts – the NCAA Tournament – could simply disappear into thin air.