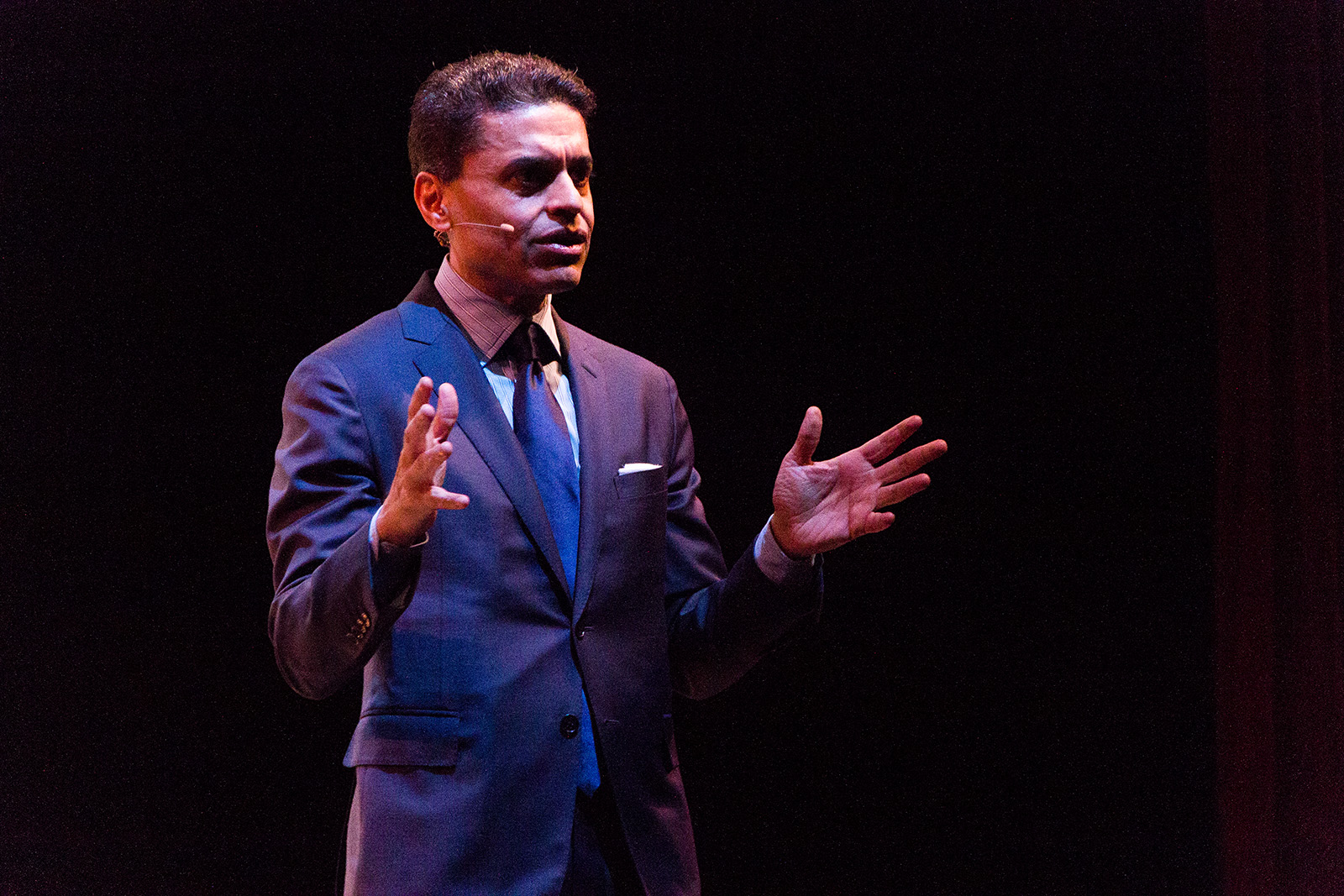 Fareed Zakaria, the host of CNN’s Fareed Zakaria GPS and a Washington Post columnist, was this year’s speaker at the Daniel Pearl Memorial Lecture Series. He talked about government attacks on the press, U.S. relations with China and North Korea and the state of democracies in the world. (Emma Skinner/Daily Bruin)

A political commentator said journalists are canaries in a coal mine at a lecture in Schoenberg Hall on Wednesday.

Zakaria was this year’s speaker at the Daniel Pearl Memorial Lecture Series. The UCLA Burkle Center for International Relations and Hillel at UCLA co-sponsored the event. Zakaria talked about government attacks on the press, U.S. relations with China and North Korea and the state of democracies around the world.

The lecture series commemorates Daniel Pearl, a Wall Street Journal reporter who was murdered by terrorists in Pakistan in 2002 while investigating a story on al-Qaida. His father, Judea Pearl, who is also a UCLA professor emeritus of computer science, and Hillel’s Rabbi Aaron Lerner introduced Zakaria at the event.

“What is the modern equivalent of the biblical prophet? The journalist,” Pearl said.

Free speech is one of the core foundations of democracy, Zakaria said. He added he thinks countries around the world, including the United States, are undermining their democratic systems by limiting or even threatening journalists and media organizations critical of the government.

Zakaria said President Donald Trump is setting a precedent that world leaders can discredit their critics by calling the media “fake news.”

“Authoritarian leaders in the world have quoted the president of the United States to support their authoritarian systems,” he said. “When has that ever happened before?”

Turkey is an example of a country intensifying its efforts to restrict the press, Zakaria said. It is the world’s leading jailer of journalists, he added.

The Burkle Center chose Zakaria as this year’s speaker because he is a prominent columnist and pundit, said Kal Raustiala, the director of the center. The series, which started in 2003, has mainly featured journalists, including Christiane Amanpour, Anderson Cooper and David Remnick.

“We want to remind people of Daniel Pearl’s life and his work (and) also why journalism is important to understand the world we live in,” he added.

During an interview with student journalists before the lecture, Zakaria said he thinks it is important for universities to welcome and facilitate discussions involving diverse opinions.

“The nature of an intellectual arena has to be one which allows open, unfettered conversation, discussion, debate,” he added. “The best answer to bad ideas are good ideas. Not to shut down those ideas. Not to not hear those ideas.”

Zakaria said he thinks increased censorship on campus stems from many Americans having insular and shortsighted views on national issues.

“People want politics to be primarily about their experience, their identity rather than a shared experience and a common identity,” he added.

Students who attended the lecture said they think Zakaria made a strong case for why journalism is a necessary part of a democratic society.

Megha Ilango, a first-year computer science and engineering student, said she appreciated Zakaria’s point that the government’s negative attitude and attacks on the free press was an international issue, rather than a domestic issue. She added she liked how he was able to look at both sides of each issue.

“He gives information about both conservative and liberal sides,” Ilango said. “It’s important for our generation to understand the history and values of these parties.”

Anita Ilango, a first-year computer science and engineering student, said she thinks it was refreshing to hear Zakaria call on universities to remain open places of discussion.

“It’s important to be open to ideas,” she said. “We should still be listening to the other side.”

Zakaria warned that the democratic traditions Americans are proud of, such as the freedom of the press to criticize the government, should not be taken for granted.

“This is how democracy ends,” he said. “Not with a bang, but with a whimper.”