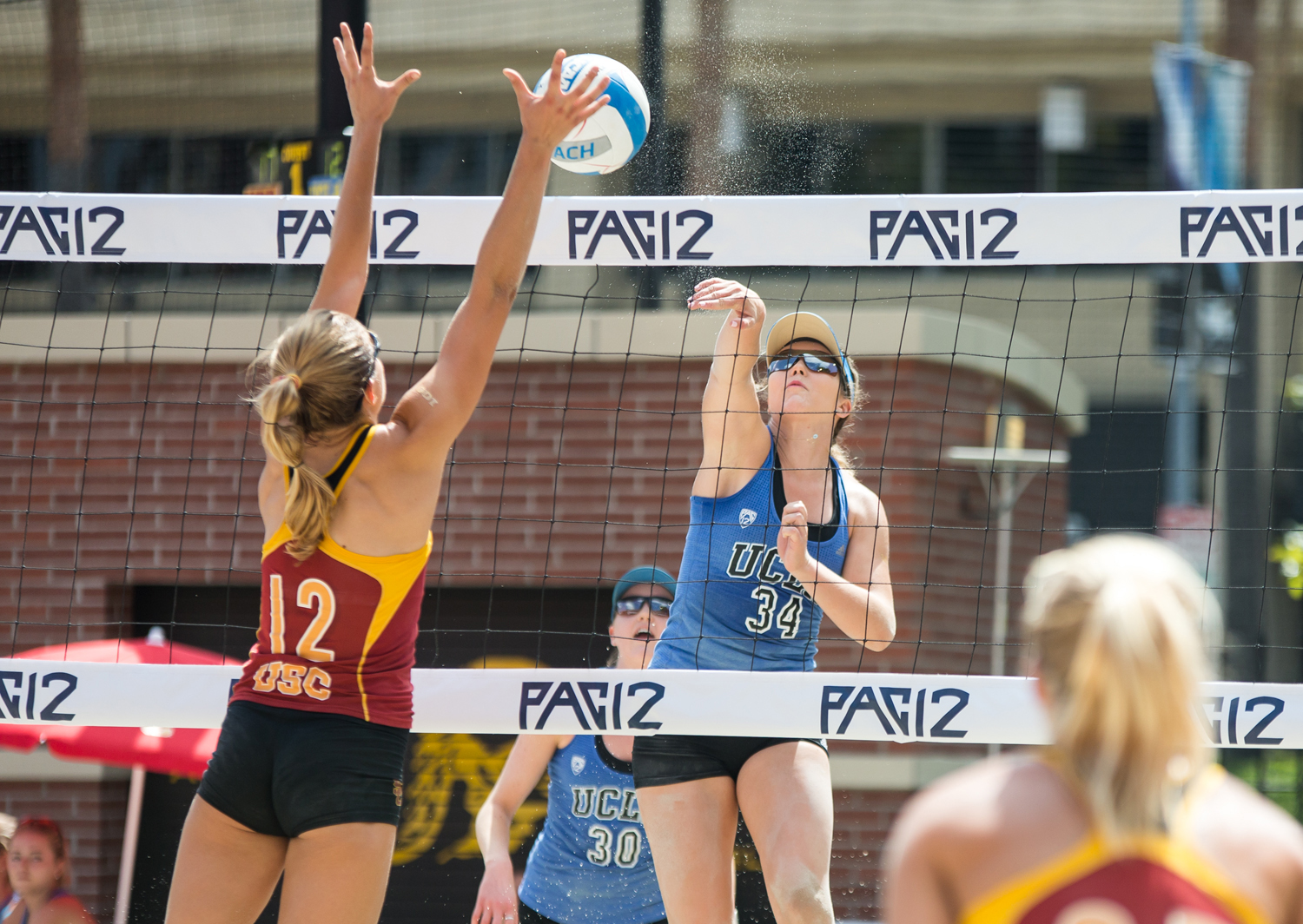 Elise Zappia will be a leader on this year’s roster with the addition of six freshmen. The senior finished the 2016 season 21-12 overall with partner junior Izzy Carey. (Aubrey Yeo/Daily Bruin senior staff)

UCLA beach volleyball hasn’t lost more than eight matches in a season since the team’s inception in 2013.

This year, the Bruins hope for even better.

“This is the best group we’ve had since we started the program,” coach Stein Metzger said. “We have a deep and talented squad (and) we’re as competitive as we’ve ever been.”

This season’s roster welcomes six freshmen along with junior transfer Sarah Sponcil from Loyola Marymount. As a setter in 2017’s indoor season, Sponcil finished second in the Pac-12 with 11.23 assists per set.

Freshman Mac May totaled 282 kills as an opposite indoors for the Bruins and led the team in aces with 33. Freshman Megan Muret also joins the team as a 2017 AVCA High School Beach All-American.

“The freshmen that came in are competing right away,” Metzger said. “We’ll (also) lean on (senior) Elise Zappia and the addition of Sarah Sponcil. They’re all going to be really strong players for us.”

Zappia, who posted an overall record of 21-12 in the 2016 beach volleyball season with partner junior Izzy Carey, said the depth of this squad will be key.

“Top to bottom, all of the spots are really tight this year,” Zappia said. “Now, we’re going to have five different ways to win three out of five games.”

Metzger said the Bruins will not only rely on the leadership of Zappia, but also junior twins Megan and Nicole McNamara.

The sisters went 16-12 on court one in 2016 and were given First Team All-Pac-12 and AVCA Collegiate Beach Volleyball All-American honors for two years in a row.

“I’m definitely going to need to step into more of a leadership role than I have in the past couple years,” Nicole McNamara said. “I’m just going to lead by example and use my two years of experience to help the underclassmen.”

UCLA was second-seeded in the NCAA Tournament in 2017 but ended the season with a loss to No. 3 Pepperdine. Metzger said the Bruins’ downfall was their lack of preparation for windy conditions.

UCLA will face this challenge as it heads to Honolulu this weekend to take on No. 5 Hawai’i and No. 17 Stanford.

“I think we’ll see 14 to 17 mph of wind during both days,” Metzger said. “It will give us an opportunity to train so that, if we do make it to the NCAA championship and it’s windy again, we’ll be ready for it.”

Hawai’i reached the quarterfinals of the NCAA Tournament last year but also fell to Pepperdine. The Rainbow Warriors haven’t faced the Bruins since the 2016 season.

Stanford failed to reach the tournament after finishing 13-10 last season. The Bruins haven’t played the Cardinal since 2015 and will now be tested by Kathryn Plummer – the AVCA National Player of the Year and espnW player of the year in the 2017 indoor season.

“I’m just excited to not be playing against my teammates anymore,” Zappia said. “It’s good to sharpen up and see what we need to be working on moving forward in the season.”

Metzger said some other assets for the Bruins are their ball control and smart decision making on the court.

“We’re great setters, we’re great servers, we’re great passers and we’re great at strategy and understanding the nuances of the game,” Metzger said. “We don’t have the tallest team out there, but I think we have the best control of the ball and hopefully that will translate to windy conditions as we travel to Hawai’i this weekend.”