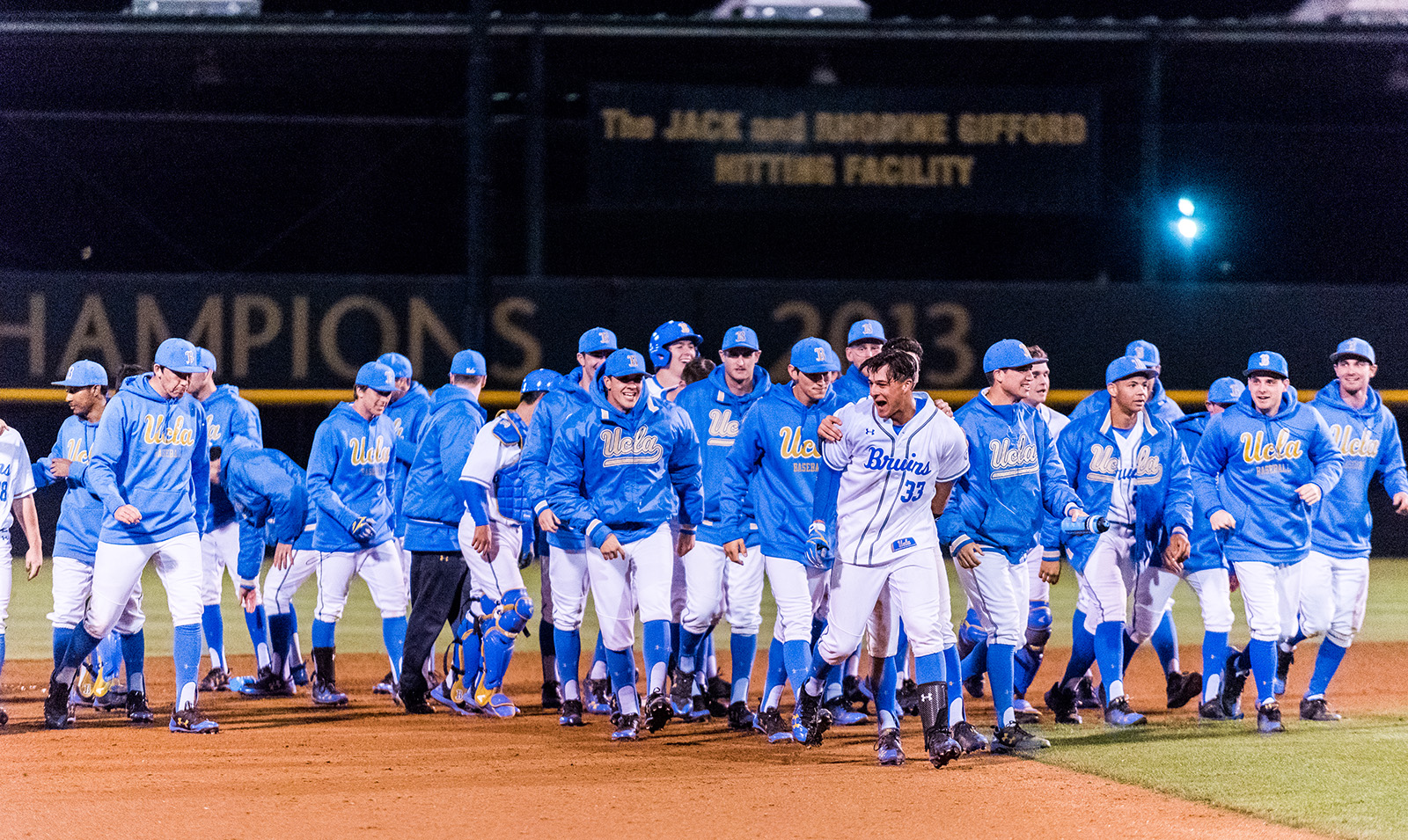 Chase Strumpf delivered the final blow in UCLA baseball’s walk-off victory over Pepperdine. The sophomore second baseman entered his final at-bat of the night with an 0-for-4 batting line, but his RBI double ultimately made him the hero Tuesday night. (Abraham Ramirez/Daily Bruin)

Chase Strumpf was 0-for-4 coming up to plate with the score tied in the bottom of the ninth.

One pitch later, the sophomore second baseman was strolling around second base while his entire team swarmed him from the dugout.

No. 11 UCLA (4-0) defeated Pepperdine (2-3) 2-1 on a walk-off RBI double from Strumpf at Jackie Robinson Stadium on Tuesday night.

“Right before me, (junior third baseman Jake Hirabayashi) had a good at-bat, saw a lot of sliders, so I took that into account going into my at-bat,” Strumpf said. “I was aggressive and got a slider up and put a good swing on it.”

Speedy center fielder Daniel Amaral led off the ninth with a single to right field on a 3-2 count. Amaral advanced to second on a sacrifice bunt – and following an intentional walk of sophomore first baseman Michael Toglia and a Hirabayashi strikeout – Strumpf stepped up to the plate and hit it to the left field wall, bringing home Amaral with ease.

Strumpf came off the opening weekend against Portland hitting .700 with 10 RBIs, but he and many other Bruins struggled to produce runs throughout the game, leaving 13 men on base.

“That could have been a 6-0 (for UCLA),” Savage said. “I’m not saying we dominated the game, but we were in control of the game.”

UCLA’s walk-off run was given up by the same man who tied the game an inning earlier.

Pepperdine designated hitter Jordan Qsar tied the game at one apiece in the top of the eighth inning with an RBI double. He would then go in to relieve the game at pitcher, ultimately giving up the winning run.

The Bruins’ first run came during the second inning on a single up the middle by Amaral, bringing home junior designated hitter Jake Pries from second.

Sophomore right-hander Ryan Garcia made the first start of his career on the mound for UCLA, throwing 5 2/3 shutout innings and striking out seven. He threw 82 pitches, allowing three hits and walking none.

“That’s about as good as Ryan Garcia’s pitched for us,” Savage said. “He’s got four pitches – it’s really just been about repeating and throwing strikes and he did that tonight.”

“I’m just focused on what I have right now – the Tuesday job,” Garcia said. “Staying with that and carrying over the momentum from Friday, Saturday, and Sunday to Tuesday. That’s just my job.”

Sophomore southpaw Nick Scheidler relieved Garcia in the sixth, striking out the only batter he faced. That would be the end of his night, as freshman right-hand pitcher Chase Farrell started the next inning.

Up just one run in the top of the seventh, Farrell allowed a double and a single to right field, placing a runner in scoring position. Savage then lifted Farrell for junior Brian Gadsby to finish off the inning. Pepperdine utilized a sacrifice bunt to advance a runner to second, but the right-hander got the Bruins out of the inning unscathed with a strikeout.

Pepperdine was able to tie the game in the top of the eighth after advancing a runner to third from first off a sacrifice bunt and a groundout. Savage then went out to the mound to talk with Gadsby.

“It’s a tough situation with the guy at third with two outs,” Savage said. “I said don’t let this guy beat you. … First pitch: whack, double. I’m just glad he didn’t hit it out of the park.”

Gadsby would stay in to finish the game and earn the win, retiring the last four batters he faced in order.

“We just felt compelled to keep the hot hand in the game,” Savage said. “At the end of the day, it was the right decision.”