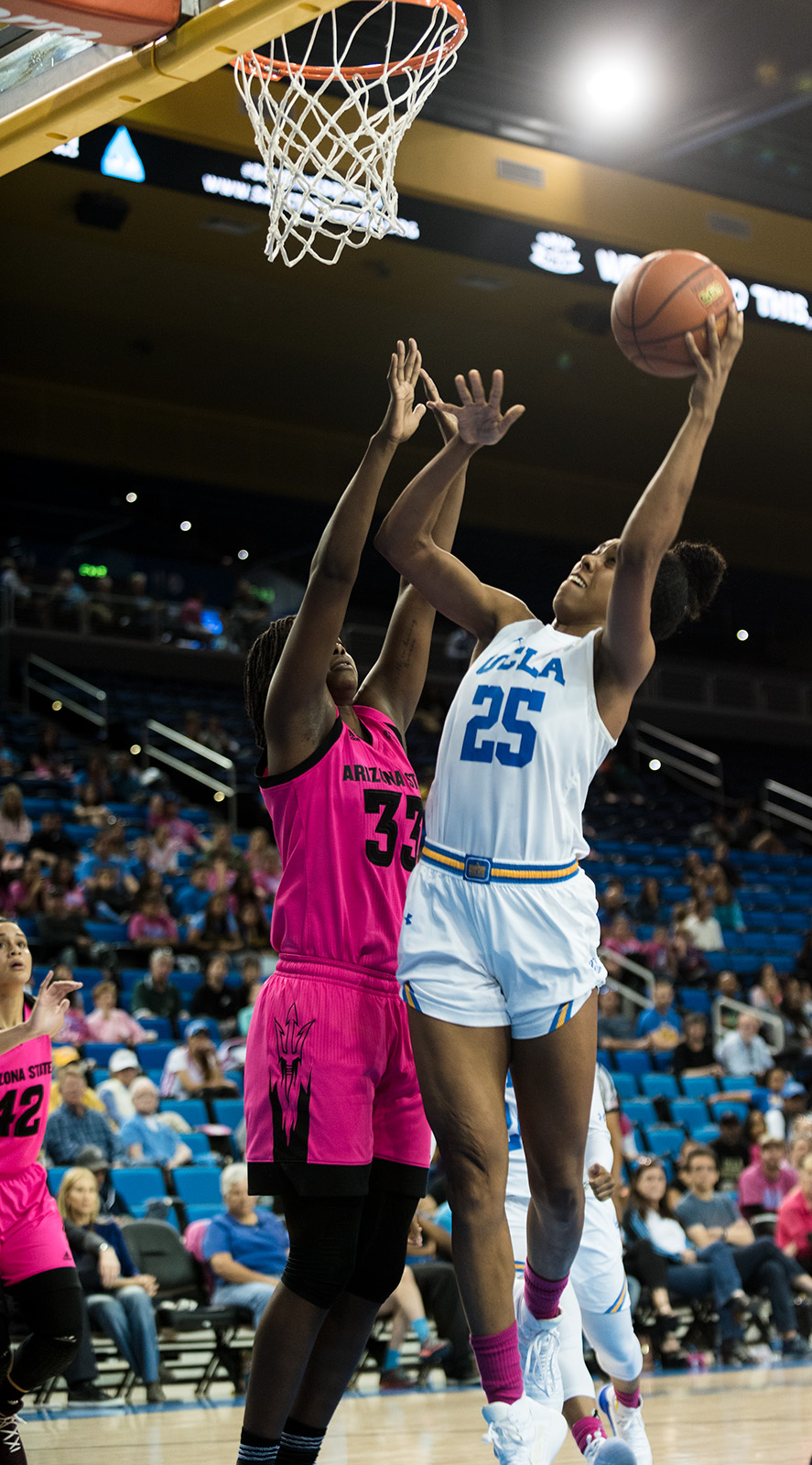 Senior forward Monique Billings recorded 26 points and 10 rebounds against Oregon on Monday night, but the Bruins eventually fell in overtime. It was UCLA’s second straight loss, after winning 12 in a row. (Liz Ketcham/Daily Bruin)

The Bruins experienced deja vu in more ways than one Monday night.

Senior forward Monique Billings recognized that it wasn’t Oregon’s high-octane offense that grew the lead, but UCLA’s own problems on the defensive end.

“We were slipping on defense, we didn’t set the tempo, we weren’t aggressive,” Billings said. “We didn’t do the things that we needed to do to stop them defensively.”

However, after trailing by as much as 19 points in the third quarter, the Bruins were able to cut the lead to 5 points toward the end of the quarter. Senior guard Jordin Canada, who was leading the charge, ended a 9-2 Bruins’ run with an acrobatic, high off-the-glass layup to draw an “and one.”

UCLA wasn’t able to take the lead until the fourth quarter. Led by Canada, the Bruins started off a 9-0 run with a deep 3-pointer at the buzzer. A 3-pointer by junior guard Japreece Dean assisted by Canada eventually gave UCLA the lead.

Canada recognizes that the team’s defense did a better job in the second half with just 33 points allowed, and said it was important that the team came so close to completing the comeback.

“(Being) able to be there for each other and help each other out, playing aggressively … we didn’t do that in the first half,” Canada said. “We knew that we had to come back and try to get the win so we had to play with a lot of heart, and more passion plays that coach Cori talked about.”

Tied up after three free throws from the Ducks, the Bruins had the last possession. With two timeouts left, coach Cori Close chose to put the game in the hands of Canada, who was able to find redshirt junior forward Lajahna Drummer for a layup. But Drummer missed, sending the game into overtime.

It went down to the last minute in overtime, but Oregon guard Sabrina Ionescu hit a turnaround jumper inside the paint to give the Ducks a two-possession lead.

UCLA was not able to overcome the deficit.

Despite forcing overtime, Close said the first half was the defining part of the game.

“It’s such a mixed bag. I’m so proud of the perseverance and character and just what they showed, there (were) so many opportunities (in which) they could’ve chosen to fold (but) they chose to fight,” Close said. “At the same time, we missed some opportunities by playing that way in the first half.”