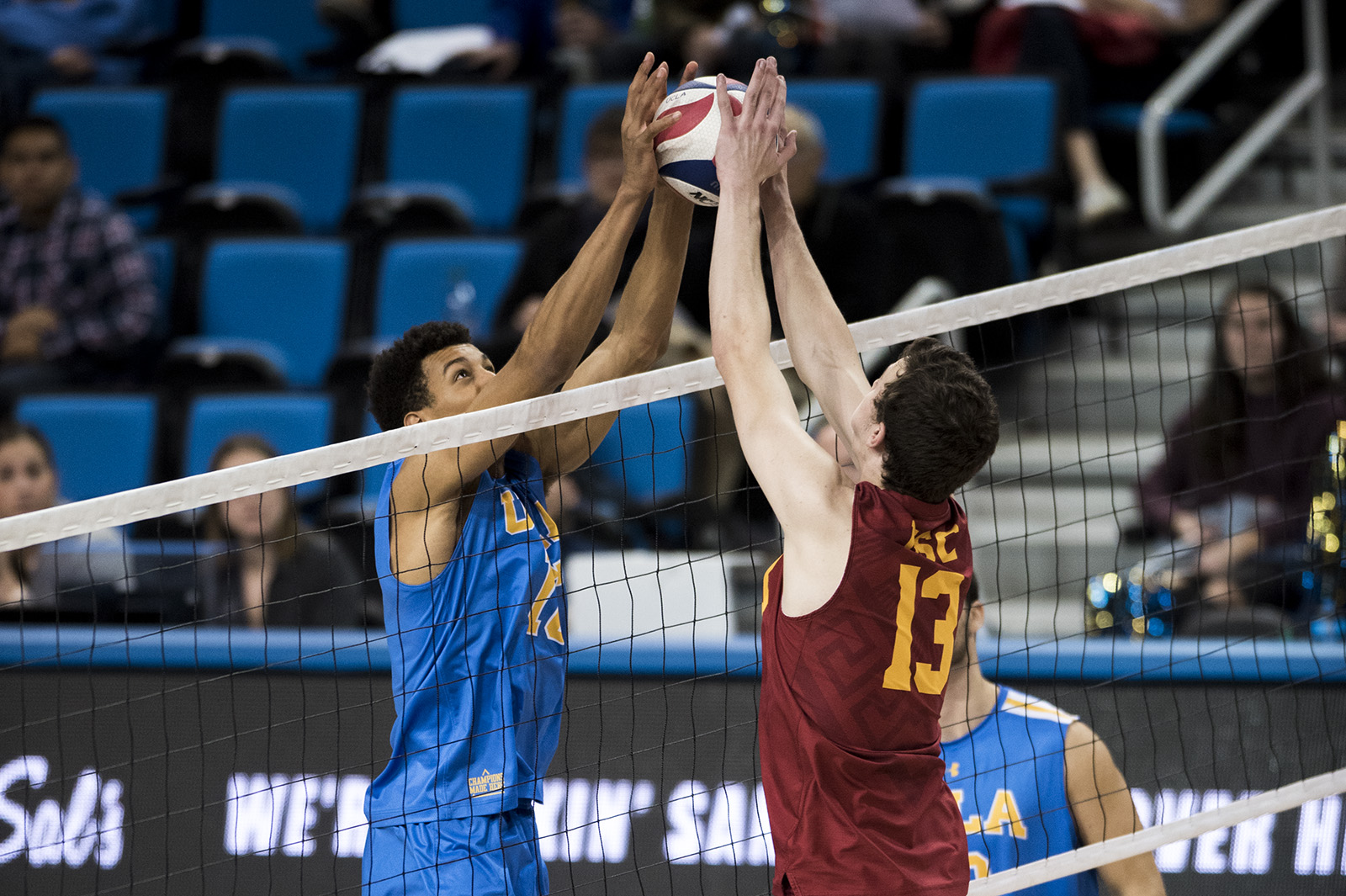 The Bruins entered the Walter Pyramid with a chance at No. 1, but fell in four sets to the current kings of collegiate volleyball.

A decisive moment in the first set was UCLA extending its lead to two points at 21-19 by scoring three in a row: a kill by sophomore middle blocker Daenan Gyimah followed by two straight attacking errors by Long Beach State opposites TJ DeFalco and Kyle Ensing.

Gyimah, the most efficient player offensively in the season before this game, finished with 13 kills, hitting for .600. But he said the Bruins could do better mentally.

“We can definitely do a better job there,” said Gyimah. “The problem with us is the mindset, the mental concentration. As long as we keep that up, the errors should go away a bit.”

UCLA took the first set 25-23, with the final point coming from a kill by senior opposite Christian Hessenauer.

Hessenauer led the team in the first set with five of UCLA’s 16 kills. Opposing him was DeFalco, who had four of Long Beach State’s 10 kills. He would finish with 17 kills, hitting for .419. Junior setter Micah Ma’a said the 49ers’ offense is different from any other.

“They have an unbelievably fast offense and it challenges you and spreads you out,” Ma’a said. “We got challenged in a lot of ways that we haven’t seen this season and it showed in the score.”

Ma’a said the impact of DeFalco and Ensing is unmatched.

“Huge. You have two weapons on opposite sides of the floor. They get blocks that aren’t very well formed, they get a lot of good opportunities,” Ma’a said. “Two of the best players in the nation – and to have them on the same team is when they compliment each other really well. They’re going to get theirs, and we just have to limit it.”

Set two started similar to how the previous one ended, with no team building a lead. With the score at 9-8 in UCLA’s favor, the 49ers scored five points in a row. UCLA scored once to end the run, after which Long Beach followed up with three consecutive points.

Errors continued to hurt the Bruins throughout the second set and would continue into the later stages of the match. UCLA hit for -0.032 during the set, logging 14 errors total – nine attacking and five serving.

The set finished 25-15, with DeFalco recording the final point with a kill.

The third set displayed the efficiency of the 49ers’ offense, with only one error on 24 attempts, hitting for .500. Although the set was close, Long Beach State scored streaks of points, with over two points in a row occurring six times. Coach John Speraw said the 49er offense transitions from its defensive stops.

“They block so fundamentally well. It gives them lots of opportunities and attempts,” Speraw said. “They outdug us by 10, but at the end, it’s their conversions on those opportunities is far greater.”

Speraw said that the biggest challenges faced tonight and the area for improvement is the connections between players.

The set finished with an attacking error from junior outside hitter Dylan Missry, who finished hitting for -.036, with six kills off of 28 attempts. The Bruins’ outside hitters struggled with their conversion rates, with leading scorer Hessenauer hitting under .200 for the third time this season.

The Bruins finished the match with 24 attacking errors and 25 service errors. UCLA hit for .191 as a team, whereas Long Beach State hit for .343, with Ensing and DeFalco leading the team.

In the deciding fourth set, UCLA had the lead at 18-15, but Long Beach State scored eight unanswered points to take the lead at 23-18. The set finished 25-21 to the 49ers, with the final point being a service error from Gyimah.

The Bruins will meet the 49ers again Wednesday at Pauley Pavilion.

“They stressed us and showed us a lot of areas we need to work on. For us, it was a great match in the long run,” Speraw said. “I’m excited to get an opportunity to play them again Wednesday.”