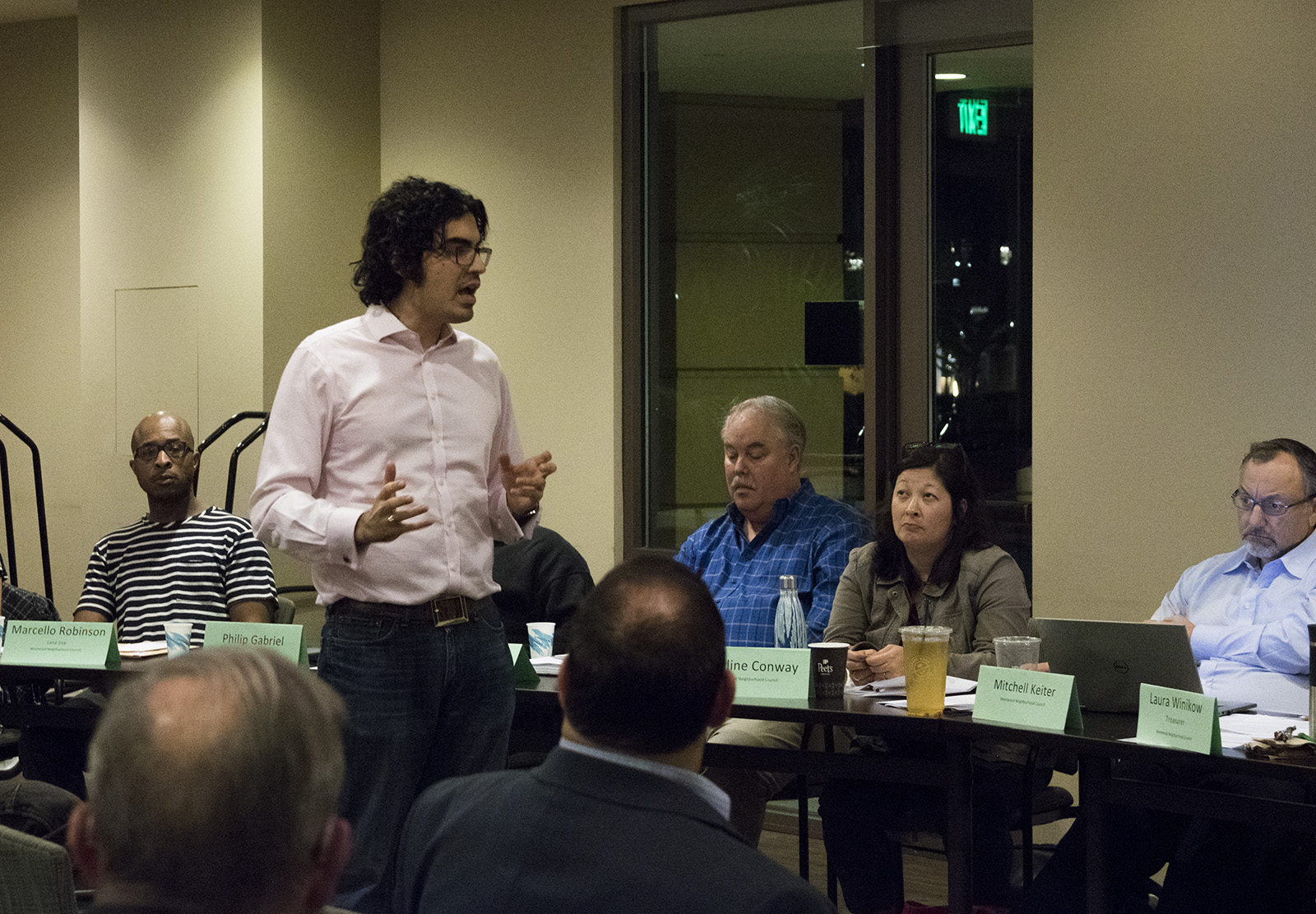 Students and other community members spoke about Westwood Forward’s plans to subdivide the Westwood Neighborhood Council during its monthly meeting Thursday. If the proposal is approved, a new council will be formed for UCLA’s campus, Westwood Village and the North Village. (Jacob Preal/Daily Bruin senior staff)

The Westwood Neighborhood Council requested the city to delay approving an application to create a new neighborhood council at its monthly meeting Thursday.

Gabriela Meza, who works in the Undergraduate Students Association Council Office of the External Vice President and is a leader in Westwood Forward, said the coalition wants to separate from the Westwood Neighborhood Council because it thinks the council does not adequately represent student interests in Westwood. She added she thinks the current council is a hostile environment for public commenters and fellow council members.

“We need something in which we can be democratically elected,” she said. “And we will do it whether this passes or not.”

The Westwood Neighborhood Council reserves one seat for UCLA students, while the proposed council would create a graduate student seat and an undergraduate student seat. However, both councils allow students to run for additional seats if they rent in Westwood or are involved in the community in other ways.

Because the department requires neighborhood councils to respond to subdivision proposals near their areas, the council initially considered whether to pass a resolution approving the coalition’s subdivision, council President Lisa Chapman said.

Councilmember David Lorango said he thinks the council does support student issues, since it recently passed a measure that made it easier for restaurants to open in Westwood and another that removed Westwood’s alcohol conditions, which incoming businesses needed to adhere to if they wanted to sell alcohol. Many student members of Westwood Forward advocated for these changes when forming the coalition and in the council’s Student Advisory Committee, which allows students to provide input on council items.

Lorango added he thinks it is important students remain engaged in Westwood politics, but that dividing the current council will not help address student needs. He also suggested the council motion to support the Westwood Forward coalition, but only if they adjust their boundaries to exclude Westwood Village.

Westwood Forward’s initially proposed boundaries comprised Westwood Village, UCLA’s campus and the North Village. Last week, Mike Fong, director of policy and government relations for the department, said in a letter the coalition would need to include an area near the North Village in its boundaries because the area would be isolated from the rest of the Westwood Neighborhood Council.

However, some members of the Westwood Neighborhood Council said they felt the coalition had not reached out to enough constituents within their boundaries to inform them of the subdivision proposal.

Chapman said the only homeowner group Westwood Forward contacted was the Holmby Westwood Property Owners Association, and, even then, the group was only notified after the department accepted the application.

After council members indicated they believed constituents were not informed enough about the subdivision, Barbara Broide, who serves on the Westwood South of Santa Monica Neighborhood Boulevard Homeowners Association, walked up to the council and handed council Vice President Sandy Brown a note.

Brown then recommended the council pass a resolution calling on the department to stay the application because she felt the coalition did not meet the public outreach requirements set by the department. The resolution passed by a majority vote on the council.

According to the subdivision ordinance, which outlines the steps groups must take when forming a new council, applicants must conduct outreach within their proposed boundaries. Applicants for subdivided neighborhood councils also need to submit an application containing at least 200 signatures from stakeholders in proposed boundaries.

Several community members at the council’s public comment sessions said they had mixed feelings about the formation of the North Westwood Neighborhood Council.

Earlier in the meeting, Broide said she thinks the department failed to create suitable requirements for subdividing neighborhood councils. She added she thinks Westwood would be more stable under a single council that oversees UCLA and the nearby residences.

Terry Tegnazian, who represents the Westwood Hills Property Owners Association, which now falls under the coalition’s proposed boundaries, said Westwood Forward reached out to her once the department modified its application to include the new area. However, she added she thinks Westwood community members are better off negotiating with one another than splitting up the council and forming a new one with more student representation.

Wren Reynolds, a UCLA programmer analyst, said he supports Westwood Forward because he thinks Westwood needs a more proactive council to address community concerns. He said the proposed council’s boundaries are set up so that no stakeholder group, including students, homeowners or renters, can realistically take a majority of the seats on council.

Of the 15 available seats on the proposed council, three are reserved exclusively for a UCLA faculty member, a UCLA staff member and a homeowner, and two are reserved for business owners.

This means students could take up to 10 seats on the council, but only if they secure all renter seats, organization seats, at-large seats and the general resident seat. In addition, the UCLA faculty, staff and student seats prevent business owners or homeowners from easily taking majority on the council as well.

Katelin Murray, a first-year political science student who serves in the USAC Office of the President, said she thinks the Westwood Neighborhood Council is too hostile of an environment to properly support Westwood interests, citing examples of council members disregarding student comments by interrupting them or laughing.

Murray said she thinks students still deserve more representation in the area, despite the initial three-page motion brought forward by the Westwood Neighborhood Council indicating that students who do not pay taxes or own property in the Village are the main drivers behind the new council.