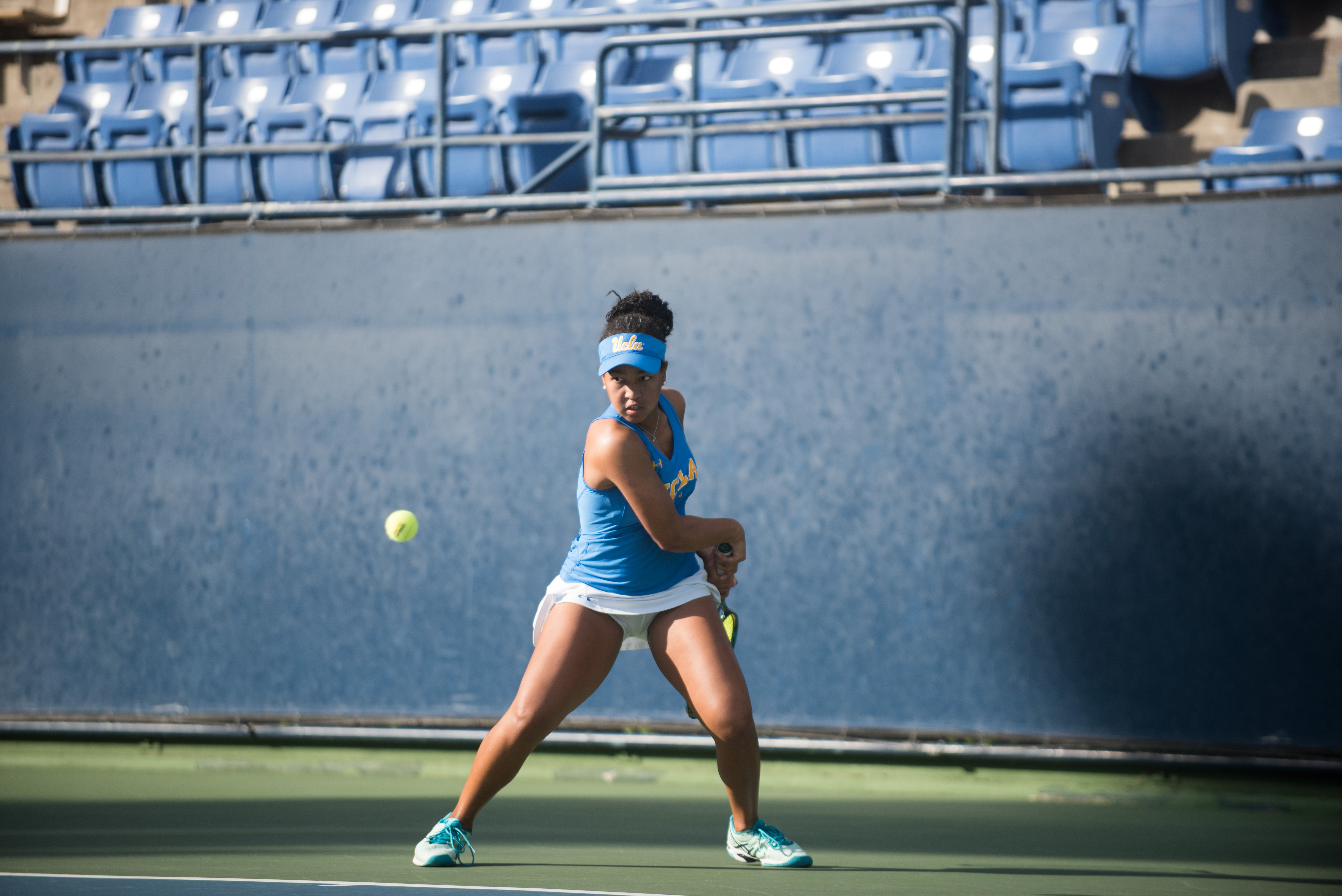 Jada Hart was named Pac-12 Player of the Week after wins in singles and doubles against South Carolina. The redshirt sophomore posts a 13-5 singles record for the season. (Pinkie Su/Daily Bruin)

By Jacqueline Dzwonczyk and Cassidy Hunt

The Bruins have competed in multiteam invitationals in their first four weekends of play, but this weekend they will face only one program.

No. 4 UCLA women’s water polo (12-1) started its season undefeated, but suffered its first loss last weekend against No. 2 USC (7-0). With the USC game fresh in its mind, UCLA will be traveling to No. 7 UC Irvine (3-4) on Friday night.

“Our offense has definitely got to pick up (after last weekend),” said coach Adam Wright. “We created some opportunities on six-on-five, but we weren’t able to capitalize on them. We are going to have to decide what kind of team we want to be.”

UC Irvine has already taken on and lost to each of the schools ahead of UCLA in the NCAA women’s water polo rankings: No. 1 Stanford, No. 2 USC and No. 3 California.

“(UC Irvine) is a good opponent,” said sophomore attacker Bronte Halligan. “They took it to USC in the tournament last weekend and they will take it to us this weekend. It’s an important game for them, especially with their home-crowd advantage.”

Wright said that he is interested to see if the Bruins have invested enough in their success this weekend.

“It’s easy to come back two days after you lose and have a great practice,” Wright said. “But it can’t just be for a couple days; it has to be for a sustained period of time.”

UCLA and UC Irvine will compete at 7 p.m. Friday in Irvine.

Even with two losses at ITA Division I National Women’s Team Indoor Championship last weekend, No. 10 UCLA moved up three spots in the team rankings going into Friday’s match against Loyola Marymount.

After a hard week of cardio-intensive practice, the Bruins (5-2) will take on the Lions (1-1) on Friday at the Los Angeles Tennis Center – an environment UCLA is familiar with in comparison to playing on fast-paced indoor courts, against opponents of unfamiliar style.

“Our players have (had) to hit a lot of balls and play longer points and we’re just not used to that here on the West Coast,” said coach Stella Sampras Webster.

UCLA will have its hands full with No. 22 Veronica Miroshnichenko and No. 105 Eva Marie Voracek of Loyola Marymount, who together are ranked No. 24 in doubles.

“(Miroshnichenko and Voracek) came in and performed well at regionals and they’re definitely going to be two people to keep an eye on,” said No. 57 redshirt sophomore Jada Hart.

Sampras Webster acknowledged that the match will test her players, who are still recovering from the weekend’s intensity.

“They may not be feeling their absolute best, our team, but to win when you’re not feeling great, or not feeling 100 percent, is a great virtue,” she said. “And that’s what might happen on Friday.”