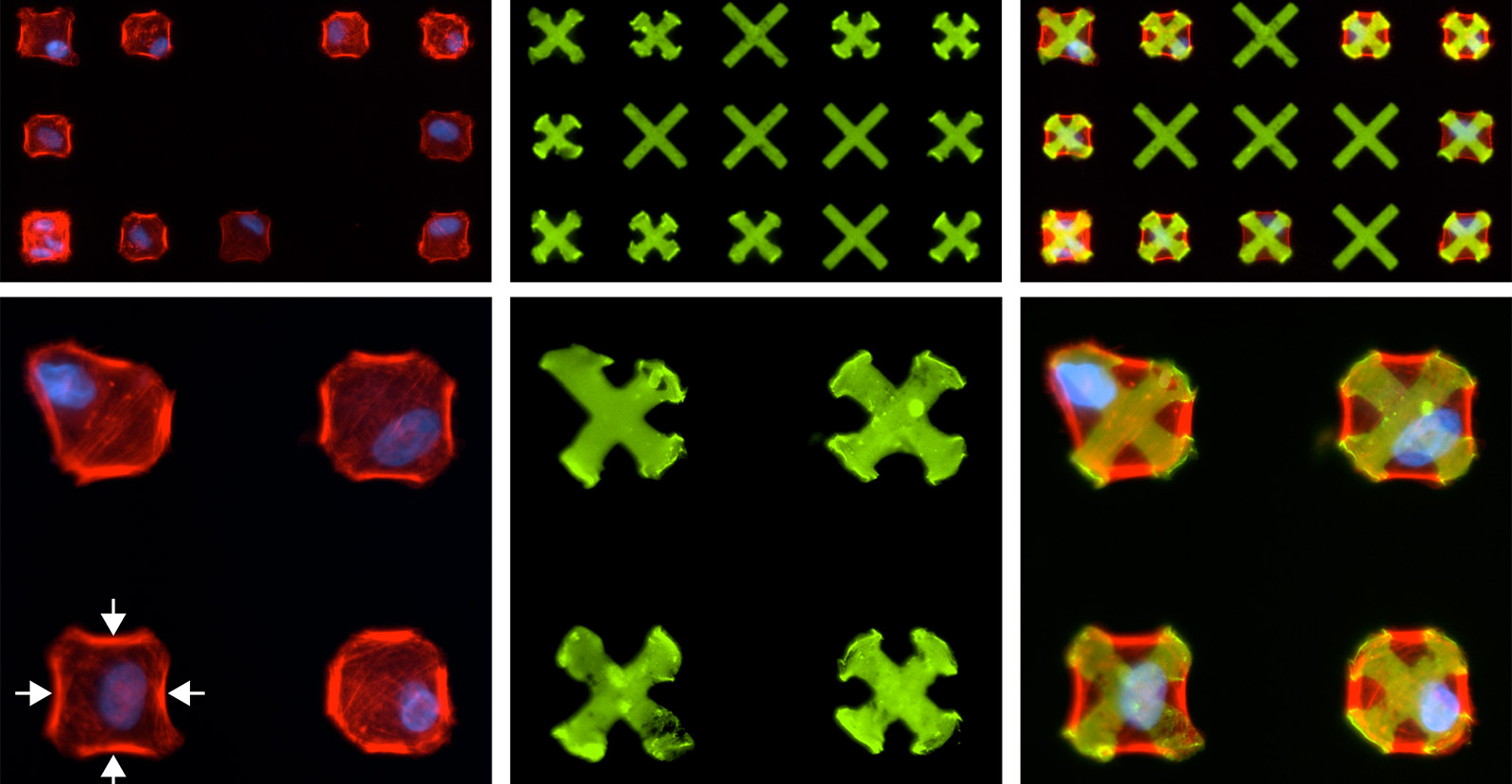 UCLA researchers recently developed a method to simultaneously study the strength of thousands of cells, allowing scientists to accelerate the process of drug testing and discovery. Cells are grown on top of X-shaped marks. (Photo courtesy of Ivan Pushkarsky)

UCLA researchers have developed a method to simultaneously study the strength of thousands of cells, allowing scientists to accelerate the process of drug testing and discovery.

In a study published last week, UCLA researchers showed their method, which measures the amount of force a single cell produces, is able to look at greater than 30,000 cells at once. This approach is one hundred times faster than current methods for assessing cell force.

Dino Di Carlo, a bioengineering professor and senior author of the study, said his lab focuses on automating data collection and processing in the life sciences. He said he thinks research in biology is limited by the tools scientists use to collect and process data.

“Information processing hasn’t advanced in the life sciences (like it has in other fields),” Di Carlo said. “We asked, ‘How can we automate the processes of measuring and quantifying data?’”

Di Carlo said the researchers chose to focus on automating a method to determine how much force a cell exerts because many diseases, such as asthma, muscular dystrophy and bladder control, involve misregulation of cell force.

“When you think of cells that exert force, your first thought is the heart,” said Ivan Pushkarsky, the lead author on the study. “But every cell exerts force in some way.”

To accurately measure cell force, the researchers grew cells on approximately 600,000 X-shaped patterns on a special glass plate. A cell growing on an X would exert force and cause the X to contract, and a computer would then measure how much each X had contracted based on an image of each cell, allowing the researchers to see how much force each cell generated.

Pushkarsky said one plate of cells provided the researchers data for approximately 30,000 individual cells. Existing methods of studying cell force can only look at about 100 cells at once, according to the study.

Most of the experimental process is automated, said Robert Damoiseaux, associate professor of molecular and medicinal pharmacology and one of the study’s co-authors. Machines add drugs that affect the strength of the cells, grow the cells under a maximum of 384 conditions and image them with a microscope. Calculating how much force each cell generated is also automated.

“The hands-on time (that a researcher has to be in lab) is only two or three minutes,” he said.

Previous methods to predict how much force a cell will generate looked at cellular levels of calcium, an important signaling molecule for contraction. In their experiments, the researchers showed that cells with high amounts of calcium did not necessarily exert the most force, contrary to previous results, Damoiseaux said.

He added he thinks the current method is more reliable because it directly measures the physical force that a cell exerts instead of relying on signaling molecules.

“We’re shifting the paradigm from a (test) that has a proxy readout from calcium, to a (test) with a direct readout of function of cell force,” Damoiseaux said. “We’re not studying secondary molecular signaling pathways, we’re studying physical movement in the environment.”

Di Carlo said now he hopes the ability to study many individual cells in high detail will accelerate drug testing for diseases such as asthma.

“People think asthma is a solved problem, but it’s not,” Di Carlo said. “There are only two main classes of drugs in use – we’re not really addressing the problem as we could.”

The researchers have started a company so that pharmaceutical companies can use their technology to screen for new drugs.

“Hopefully, in three or four years, we’ll have new therapies that have come out of this new tool,” Di Carlo said. “(This technology) is a way to move science out of the university and address problems in the real world.”