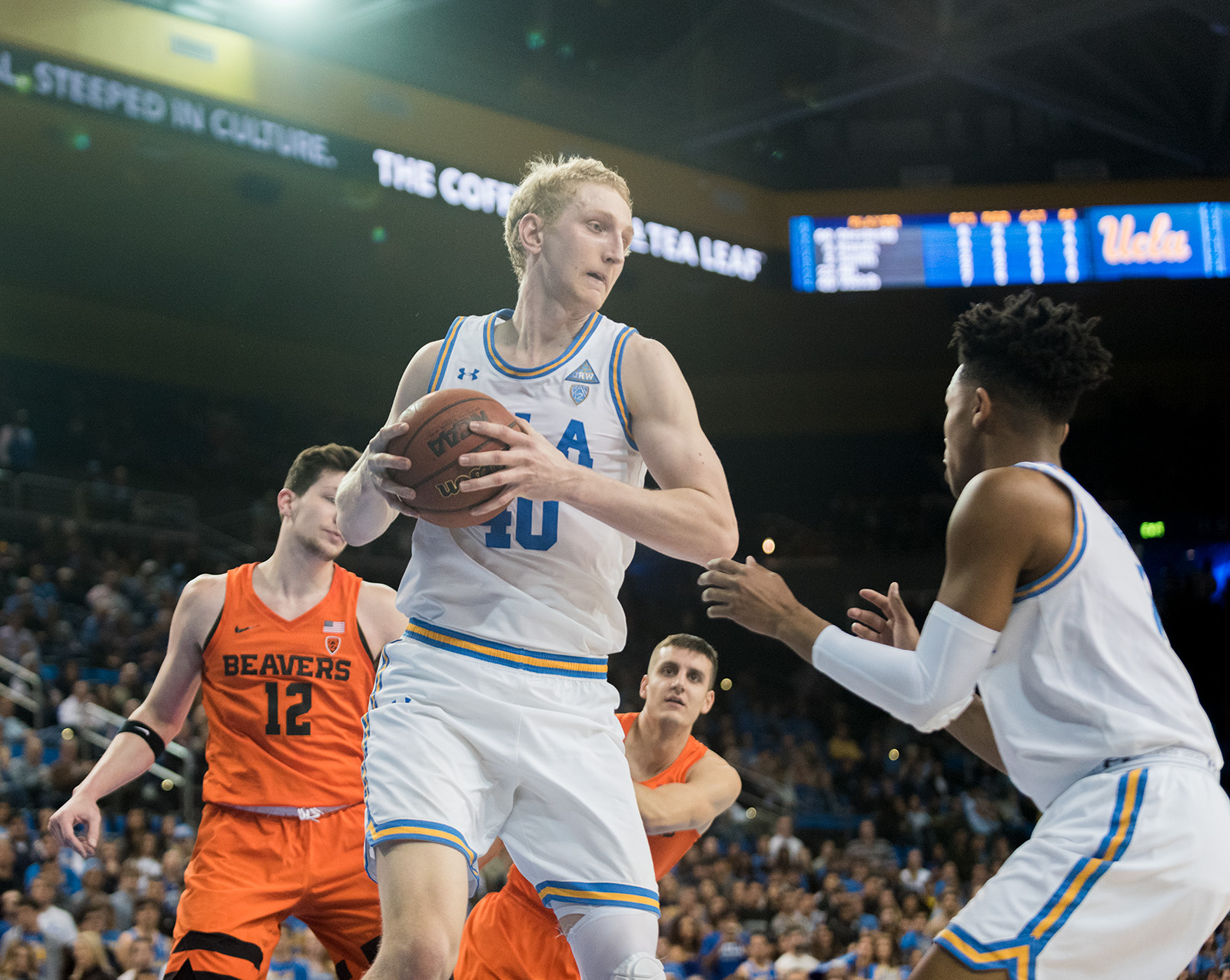 Throughout the week leading up to Thursday night’s matchup against Oregon State, UCLA was focused on one thing above all: rebounding.

“We got buried the first game on board play,” said coach Steve Alford. “(The Beavers) really want to get offensive rebounds, and we thought if we could not allow them to do that, we’d be able to run and get out in transition.”

“The bigs, they played tough, they crashed the boards,” said redshirt sophomore guard Prince Ali. “Last time we played them, they had 18 offensive rebounds, so that was a focal point: toughness in rebounding the ball. Our bigs came out and they did what they had to do.”

The dominance on the glass helped the Bruins overcome a shaky shooting performance that included 14 missed free throws and a 39.3 percent mark from the field, including just 4-of-21 shooting from 3-point territory.

“I thought our offense was really good – we just didn’t make the shots we normally make,” Alford said. “I thought we carried ourselves defensively and that’s a good sign.”

UCLA looked early on like it might run away with the game, repeatedly gashing Oregon State in transition to open the contest and build a 13-point lead midway through the first half.

The Bruins seemed intent to push the ball ahead even off of rebounds, with Ali and Wilkes regularly leaking out and receiving long up-court passes to jumpstart the offensive attack.

“Every game you want to come out and get stops and run,” Holiday said. “Tonight, we actually showed what we could do when we get stops and run. We had scores in transition, so that’s always good for us.”

Oregon State would trim the deficit to just 6 points by halftime, though, as UCLA became somewhat sloppy in transition and struggled to make shots in the half-court, at one point going nearly six minutes without a field goal.

In the second half, the Bruins would once again open up a double-digit lead only for the Beavers to claw back, coming within as few as 4 points in the final minute of the game before a pair of free throws from freshman guard Jaylen Hands and a block by Welsh sealed the win.

For the Beavers, forward Alfred Hollins led the way with a career-high 24 points on 7-of-11 shooting, knocking down three of his five attempts from long range and adding seven points at the free-throw line.

Hollins’ breakout performance was offset by supbar outings from the Beavers’ top three scorers. The trio – guard Stephen Thompson, Jr., and forwards Tres Tinkle and Drew Eubanks – combined for just 30 points, well below their average of 48.1.

Thompson, Jr., played all 40 minutes but was held to just 4-of-14 shooting as he was guarded primarily by Holiday.