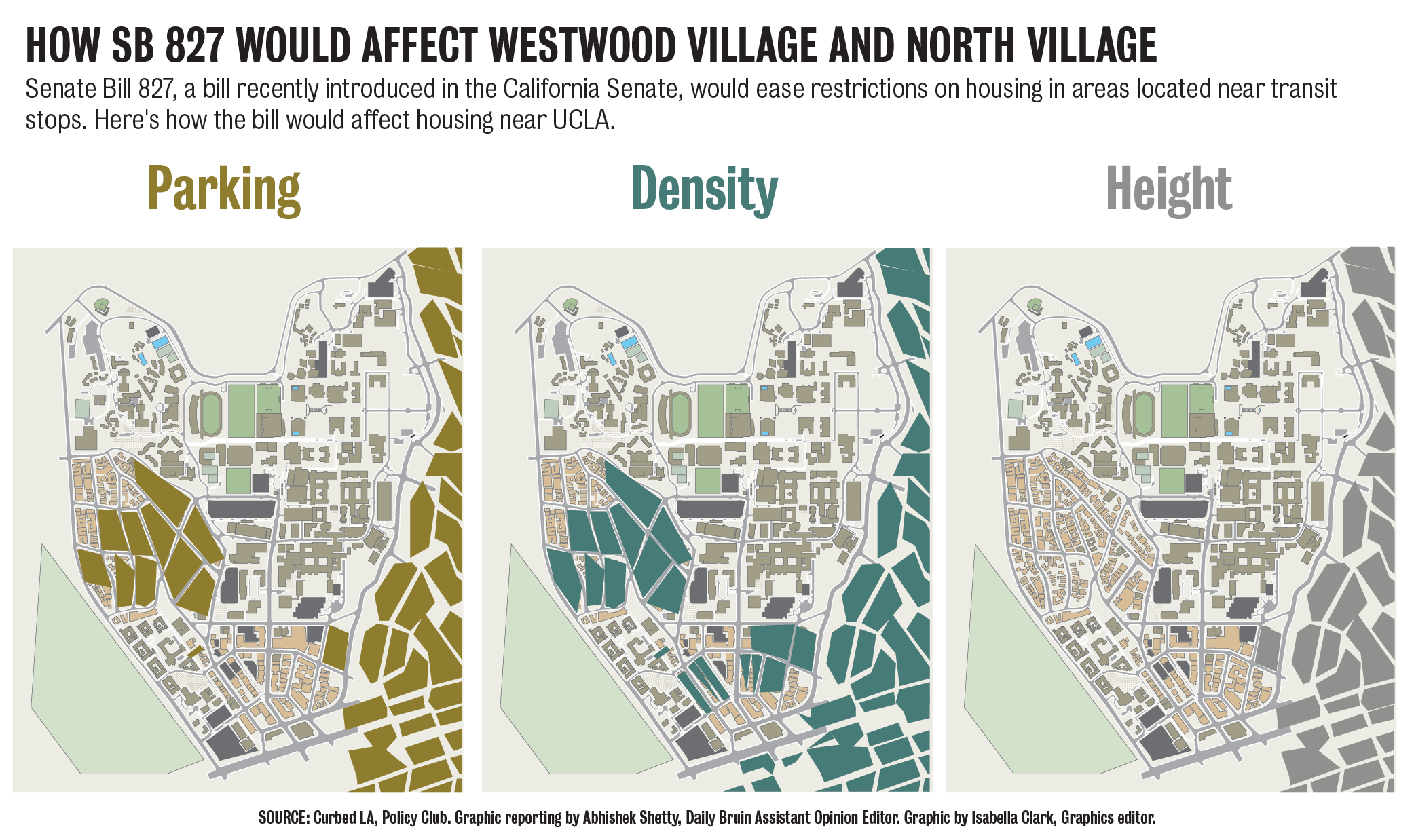 No one understands the housing crisis in California better than Angelenos looking for reasonable rent. Californians are constantly on the lookout for a better solution and state Sen. Scott Wiener thinks he’s found it in Senate Bill 827.

The bill would place a check on local regulatory powers on specific housing “hot spots” in transit-rich areas, usually occupied by single-family homes. As the bill stands, new housing could be built near a variety of transit stations, including bus and rail stops, something currently prevented by height limitations stipulated in zoning laws. While this seems promising, this could come at the expense of low-income Californians.

SB 827 would also remove all density limits and requirements on parking for projects within half a mile of major transit stations, thus giving developers more room to construct numerous housing units near major lines of public transportation. Density limits reduce the number of available housing units, and contribute to California’s housing shortage.

The bill’s proposal is largely predicated on a study conducted by the McKinsey Global Institute. The analysis concluded that California has the capacity to build up to three million new dwellings in transit-rich areas targeted by the bill.

Though the analysis calls for collaboration between local and state governmental agencies, a statewide approach could be more effective. Past local efforts, such as a 2017 Los Angeles policy known as The Exposition Corridor Transit Neighborhood Plan – which would allow builders to increase housing development near Los Angeles transit lines – might have been key to building sustainable zoning practices that increase housing supply to meet growing demand – had they ever taken effect. But even so, these local policies often don’t include provisions for affordable housing.

A statewide mandate to create housing in transit-rich areas might help solve the housing crisis — but not as it presently stands. SB 827 does not provide anti-displacement protection for people in lower-income areas and does not incentivize the development of affordable housing, which has led to strong opposition to the bill from housing activists.

Though supporters of the bill think local regulation could fill in the gaps, state legislators need to account for the potential rise in gentrification and exclusionary policies that might result from SB 827. The bill needs to be amended to encourage, or even require, the development of affordable housing.

Some critics of SB 827, such as Damien Goodmon of the Crenshaw Subway Coaltion, have called it the new “Trail of Tears,” claiming the bill would displace low-income residents and limit their access to affordable housing in key areas. However, the areas that will be affected vary from map to map.

Some maps show that South and East LA would be more greatly affected than other areas of the city. But Ethan Elkind, the director of the Climate Program at UC Berkeley Law, said the main areas affected by the bill would probably be wealthier areas like Venice, Santa Monica and western Los Angeles.

“I think that the concern (of gentrification) is overblown. We’re already seeing gentrification happening like crazy … and the reason it’s happening is that we’re not building enough housing in general,” Elkind said.

By providing more housing for the wealthier groups seeking market-rate properties, the likelihood of gentrification in lower-income areas would be reduced, Elkind said. Because wealthier people would have more access to housing in affluent neighborhoods affected by the bill, they would stop snatching up available units in lower-income parts of the city.

However, if builders start constructing lots of new developments aimed at wealthier residents, low-income renters could be subsequently priced out of their homes, said Mike Lens, an associate professor of urban planning and public policy at the UCLA Luskin School of Public Affairs. The inflow of wealthy residents will raise property prices and the cost of living in these areas, pushing out longtime residents who would no longer be able to afford to live there.

Policymakers need to incentivize the development of affordable housing through subsidies or even regulations that require builders designate a portion of a development’s units as affordable for lower-income residents.

“We need to figure out how to lessen the likelihood that displacement is going to occur because of development,” Lens said. “We have to think about how to promote equitable development.”

Some, like Elkind, believe that SB 827 could ultimately reduce gentrification. And that’s a valid point, save for the assumption that California’s crisis is just a result of lack of housing, not an amalgamation of factors like socioeconomic stratification and marginalization of certain communities.

Without protection in the language of the bill for underserved communities, there is no guarantee that neighborhoods won’t be gentrified by an influx of development aimed at wealthier residents. Residents in areas such as South and East LA need lower rent and more housing options. More financial barriers are the last thing they need.

Californians shouldn’t get caught up in the hype of this shiny new statewide approach to the housing crisis. More housing shouldn’t come at the detriment of our local communities.