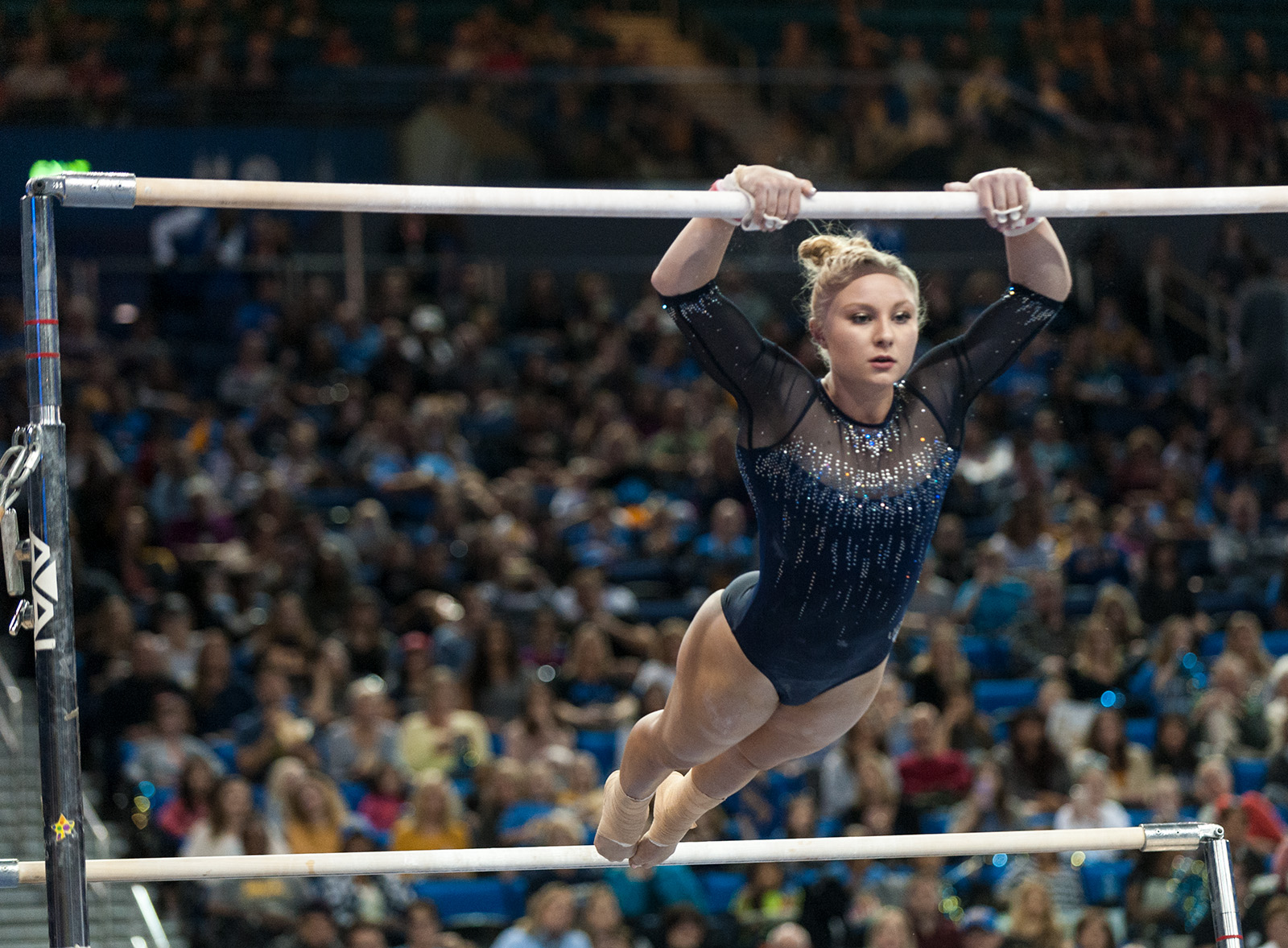 The No. 2 Bruins traveled to Berkeley to nab their second-best score this season against No. 23 California. UCLA boasts the biggest roster of the top five teams in the country. (Kristie-Valerie Hoang/Assistant Photo editor)

UCLA gymnastics has a large roster, and it’s showed its strength this past week with its fourth straight score above 197 – while competing with more gymnasts than many schools have on their roster.

This large roster allows coach Valorie Kondos Field to rest gymnasts who have competed in multiple events all season. Kondos Field said she did not believe the Bruins could move up in the rankings even with a high score, so she let some of the team rest.

“One reason why we mixed up our lineup so much and we gave our guns that have been competing every weekend a break was because I didn’t think we could score high enough to move up in the rankings,” Kondos Field said. “Our depth came in, and they proved today that they prepared well.”

However, the Bruins did move up in the rankings for the first time this season, jumping from fourth to second.

Sophomore Kyla Ross and junior Katelyn Ohashi have competed in the all-around three times each in the past four weeks. Against the Bears, Ohashi competed in two events, and Ross competed in just one.

This also allowed other Bruins to compete. Redshirt freshman Anna Glenn made her season debut and scored a 9.800 on the vault. Others, such as senior Napualani Hall and freshman Savannah Kooyman, competed in two events for the first time this season. Hall scored a 9.950 on vault and a 9.900 on floor, while Kooyman scored a 9.875 on uneven bars and a 9.825 on floor.

Kondos Field uses the dual meets to allow less experienced gymnasts to gain some competition practice. Through exhibitions, gymnasts can compete in a meet environment without having their scores counted. Freshman Kendal Poston and sophomore Mercedez Sanchez both traveled to Berkeley and completed one exhibition routine. Poston scored a 8.950 on floor, and Sanchez scored a 9.675 on uneven bars.

Kondos Field said that letting her gymnasts compete was a good way to reward them for their hard work all year.

“We felt it was a really good opportunity for us to compete our depth and honor their training and their commitment to this program,” Kondos Field said. “The best way to honor them is to let them do what they love to do.”

With 12 meets in a 12-week window, Kondos Field said there is enough time to try to get more gymnasts to compete.

“We’ve got a very large team this year, and most of them have gotten ready to compete,” Kondos Field said. “Even though they’re not at the top of our roster as far as being able to score like (Ross) can or (redshirt senior Peng-Peng Lee), they deserve to compete. They have prepared to the best of their abilities.”