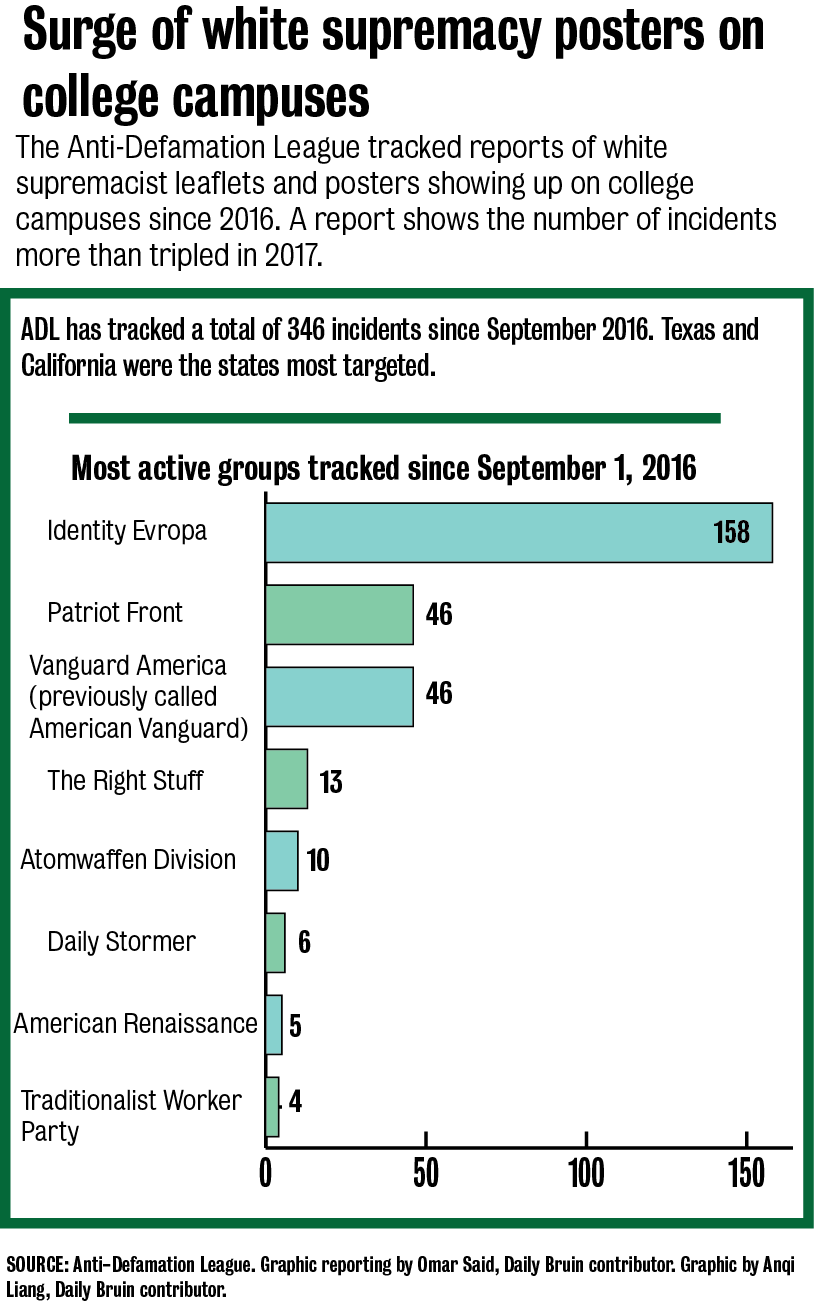 UCLA has not seen more white supremacist activity on campus since fall 2016, despite a rise in such behavior on other college campuses.

A report released by the Anti-Defamation League on Jan. 29 reported an increase in white supremacist recruitment on college campuses following the inauguration of President Donald Trump. There were 147 reports nationwide of white supremacist activity, including fliers, stickers and banners, in fall 2017, almost three times as much as in fall 2016.

The ADL is a civil rights agency that fights anti-Semitism and discrimination.

The report also found that in most cases, offensive posters on college campuses were placed there by outside groups. In November 2016, a group calling itself the “UCLA White Students Group” put up posters on campus with white supremacist views and warnings that were later removed by the university.

California had the second-highest number of incidents, at 43. ADL spokesperson Ariella Schusterman said California and Texas are home to the largest and most active membership for Identity Evropa and Patriot Front, groups that frequently employ flyers and posters on college campuses to recruit members. She added groups often use propaganda that avoid recognizable white supremacist imagery to try to attract students.

“White supremacists see campuses as a fertile recruiting ground – students on campus are prepared to soak up as much information and life experience as possible,” Schusterman said.

“Some politicians have the ability to communicate a racist message, without being explicit about it,” he said.

UCLA officials said the campus has not seen a rise in white supremacist activity over the past year.

UCPD Lt. Kevin Kilgore said UCPD recorded three to four hate incidents in both 2016 and 2017. He added hate speech is classified as a hate incident, and would only be considered a hate crime if it occurs with another crime such as theft or vandalism.

Several UCLA experts said they think the report showed hateful actions are being normalized throughout the country.

“On the one hand, free speech is an American principle, and it’s a right in the Constitution,” he said. “On the other hand, racist talk is hurtful, and racist attitudes can spread.”

Ron Rogowski, a political science professor, said he thinks the increase in white supremacy incidents on college campuses is concerning because the Nazi Party first came to power by winning a majority in the national federation of German university students.

“If assumedly intelligent students can be converted so easily into unashamed and violent racists, just because racist speech becomes first officially tolerated and then officially promoted, it can probably occur anywhere, certainly including here,” he said.

Kosi Ogbuli, a second-year neuroscience and political science student and vice chair of the Afrikan Student Union, said he thinks the university has a poor track record of dealing with hateful incidents because of how they reacted to Ben Shapiro’s campus visit last year. Hundreds of students protested when Shapiro, a conservative commentator, UCLA alumnus and former Daily Bruin staffer, gave a speech on campus.

“UCLA handles things in a very reactive way – when Ben Shapiro came to campus, the university reacted to the protests and the unrest, rather than addressing what caused them,” he said.

Ogbuli said he thinks white supremacy is still institutionalized in society as a whole because power structures in society benefit certain groups over others.

“It’s not as blatant as it was in the ‘60s, but you can see white supremacy … through stagnancy, in contentment with things as they are and with the tendency to be regressive rather than progressive,” he said.