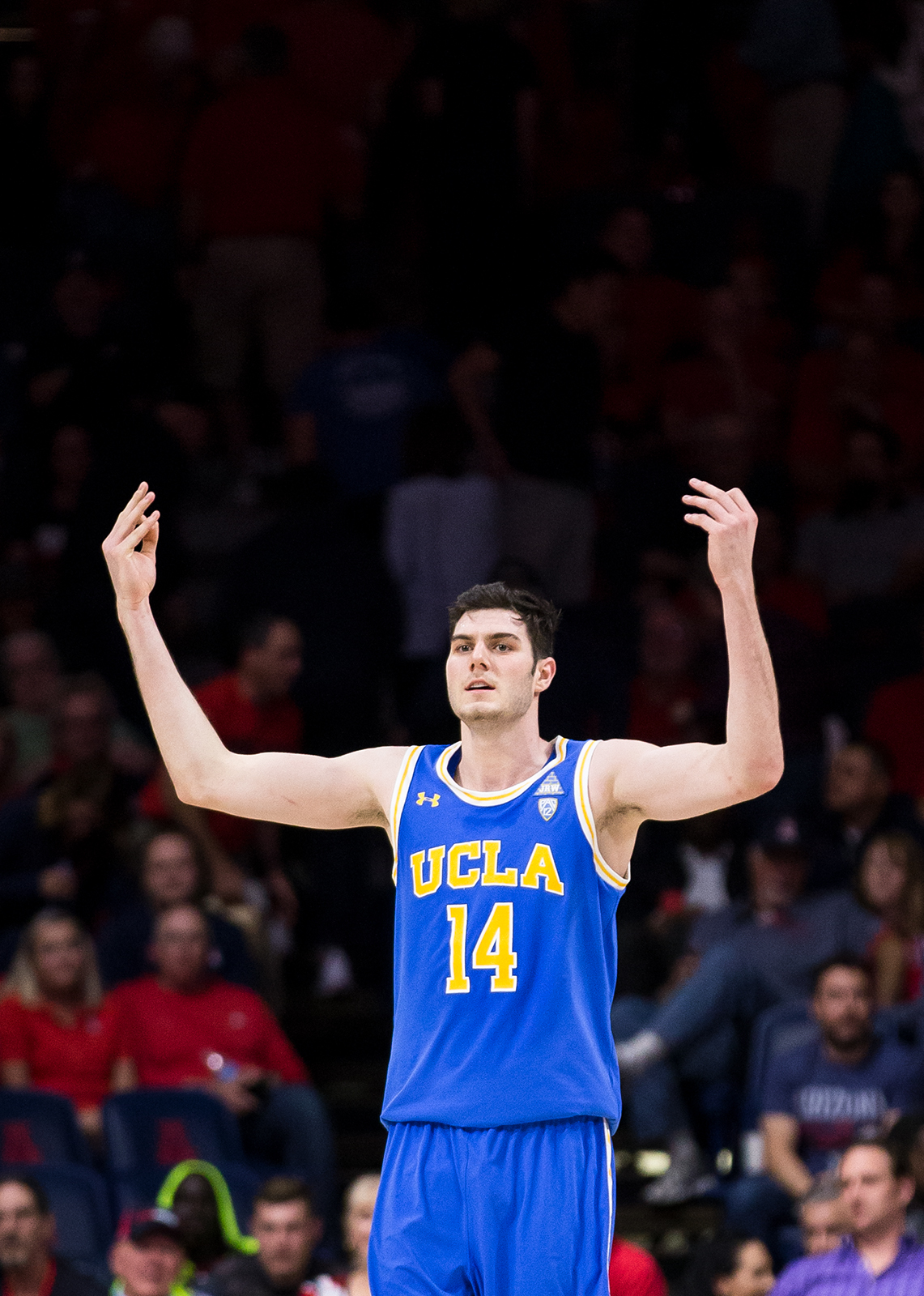 Senior forward GG Goloman’s 16-point performance in a team-leading 36 minutes of play boosted the Bruins over Arizona in one of college basketball’s most hostile environments. (Aubrey Yeo/Daily Bruin senior staff)

TUCSON, Ariz.—UCLA faced its most raucous atmosphere of the season – against a ranked opponent, no less.

One sign in the McKale Center student section read “Steve Alford lost his balls,” taking a jab at the Ball family’s departure from UCLA’s program.

“I made the first one, so I was like, ‘I’m going to shoot another one,’” Hands said. “After I made that one, I was for sure going to shoot the third one. We had nine seconds left (in the half) and I just shot that one too.”

Arizona pulled within 4 points less than five minutes into the second half, but an 8-0 UCLA run put the game away, as coach Steve Alford’s squad led by at least 9 points the rest of the game.

Senior forward GG Goloman set a career-high with 16 points on 6-of-8 shooting, including a 3-pointer with under two minutes remaining which sent Arizona fans flocking to the exits. Senior center Thomas Welsh added his 14th double-double of the season with 11 points and 12 rebounds.

Their perimeter play – both bigs took four 3-pointers, with Goloman making three and Welsh making one – dragged Wildcat 7-footers Deandre Ayton and Dusan Ristic outside of the key. That strategy nullified their interior presence and opened lanes for UCLA to score 34 points in the paint.

“I think especially our bigs all have the ability to pick and pop and knock down shots from the perimeter, so it throws a little wrinkle in (our offense),” Welsh said. “Those are two very skilled bigs and very good rim protectors and if we can pull them away from the basket a little bit, that would play to our advantage.”

Four other Bruins scored in double figures, led by Aaron Holiday’s 17 points. The junior guard also added eight assists and only one turnover.

Foul trouble plagued the Bruins in the first half, as Holiday and Welsh picked up two and freshman guard Kris Wilkes recorded three, forcing each player to the bench for several minutes. But during the entire the game, no UCLA player ended up with more than three fouls.

“I thought that was the key in the second half,” Alford said. “We were able to get to the bonus while we kept them off the free throw line, because (Arizona) is a really good foul shooting team. (Guard Allonzo) Trier gets there a lot. Tonight he doesn’t get to the line.”

Trier and Ayton’s inability to score points from the charity stripe – they combined for 33 points on 32 shot attempts and only two free throws – led to the Wildcats’ first loss at home this year.

Since the 2012-2013 season, Arizona has only lost five games at the McKale Center, picking up 93 wins in that span. Three of those losses have come at the hands of UCLA.