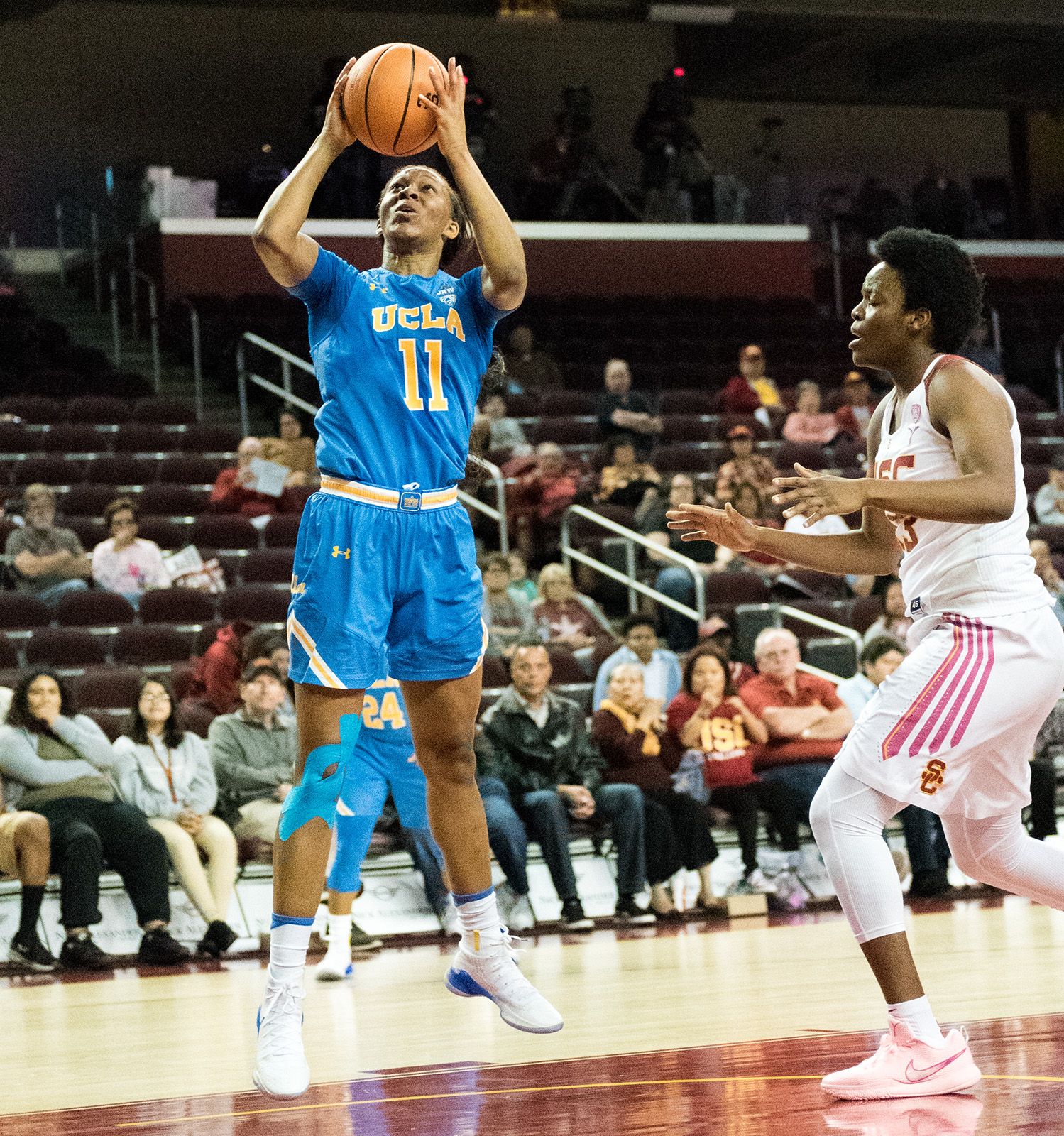 Redshirt junior forward Lajahna Drummer added 6 points in the Bruins’ home game against USC, but scored nearly twice as many points when the Bruins traveled across town and took on the Trojans at the Galen Center. (Axel Lopez, Daily Bruin)

There were nearly more UCLA fans than USC fans in Monday’s rematch at the Galen Center.

After cutting into a 14-point deficit, the Trojans had trimmed it to a 1-point game midway through the final frame. But the Bruins were able to close out, just like they have been doing all season.

“We had a great crowd,” said coach Cori Close after defeating USC at home on Friday. “When we hit some lulls, I really thought our crowd was a huge piece (of our success).”

The Bruins are 19-0 when leading after the third quarter, highlighting their strength of closing out games by dominating fourth quarters. UCLA’s four losses this season have been a result of trailing opponents going into the last period.

“Our guards have really controlled those in-game situations and they’ve got a lot of pieces around them (like forwards redshirt junior Lajahna Drummer and senior Monique Billings),” Close said.

Following the season series sweep against USC, Close said she was pleased with the team’s start and finish to the road game, outscoring the Trojans 59-34 in the first and final quarters combined. However, Close said she was bothered by the Bruins’ inability to be consistent.

“We need to learn from the lessons that were taught about urgency and competing for all 40 minutes possession by possession,” Close said. “And that will be our focus this next week in practice.”

Billings has continuously said this season that her goal is to average a double-double.

The forward is averaging 14.7 points and 9.9 rebounds a game, and her ability to jump over other rebounders has made her Pac-12’s leading rebounder.

“It’s not easy working out in the gym (with him) at 5:30 in the morning,” Billings said. “But (my dad) is an athletic trainer, … so he really molded my body and handcrafted my mechanics so that I could be able to jump.”

Drummer, on the other hand, had not posted a double-double this season until registering two in the last three games. The forward said after Monday’s game, that she worked on rebounding to provide a secondary spark along with Billings on the glass.

“For me personally, I just focus on rebounding,” Drummer said. “If (Billings) was boxing out my player, I made sure to secure the ball and get it to (senior guard Jordin Canada) with the safe hands.”

Canada has ultimately directed the Bruins during final quarters in games to either inflate their leads or regroup the team after giving up runs. While UCLA has averaged 20 fourth-quarter points in its last three games, Canada has averaged 7.6 points and two assists in the final period.

“She’s a gamer. She just knows how to show up and knows how to handle business on the court,” Billings said. “Every time she does, I always tell her ‘Just be a pro’ and try to get that into her mindset, and I think that’s what she’s really shown.”