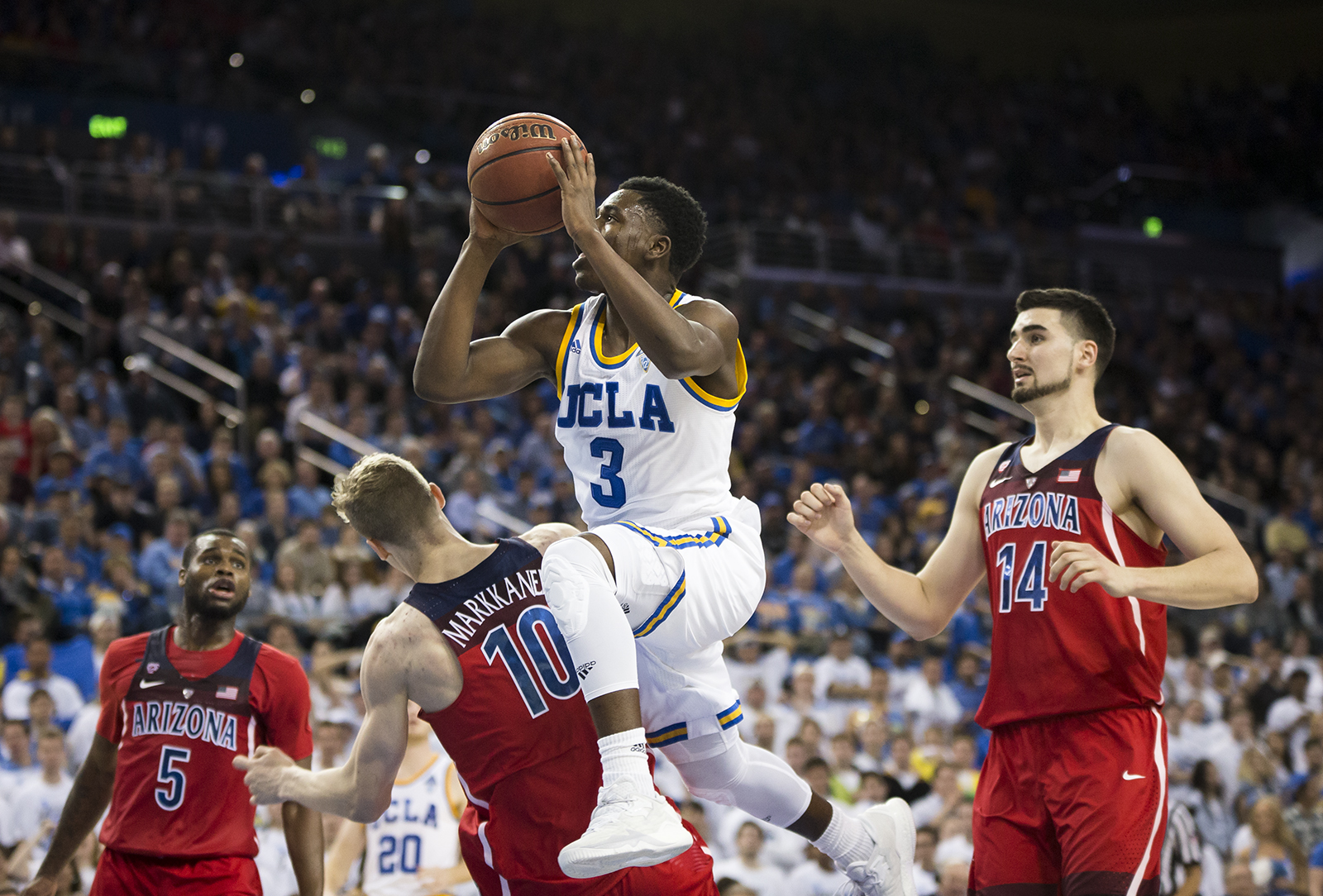 When UCLA visited the McKale Center last season, the Bruins fought to a 77-72 victory, in part thanks to a 12-point performance from then-sophomore guard Aaron Holiday. (Aubrey Yeo/Daily Bruin senior staff)

At least on one side of the ball, the Bruins are playing the way coach Steve Alford wants them to, by riding a three-game winning streak built on strong offensive performances.

That puts them in a better place than they were two weeks ago, when they lost three straight games while struggling on both ends.

“We’re nowhere near where we’ve got to be defensively,” Alford said Tuesday. “We’ve got to play very, very well, because this is a top-10 basketball team.”

The Bruin defense will face perhaps its toughest test of the season Thursday against a Wildcat offense that ranks third in the country in field goal percentage, at 51.4 percent.

Arizona boasts the Pac-12’s two leading scorers in guard Allonzo Trier and forward DeAndre Ayton, both of whom earned spots on the late-season watch list for the Wooden Award.

Trier, who averaged 17.2 points a game last season as a sophomore, has raised that figure to 19.9 this year, upping his efficiency as well by connecting on 53.8 percent of his field goals and 41.4 percent of his 3-point looks.

It helps that Ayton, a 7-foot-1, 260-pound freshman, demands immense amounts of attention from opposing defenses. Projected by many to be the No. 1 overall pick in the NBA draft in the spring, Ayton is averaging a double-double on the season with 19.7 points and 10.8 rebounds per game.

He’s joined in the frontcourt by center and fellow 7-footer Dušan Ristić, who is averaging 11.7 points and 6.9 rebounds a night and has put up double-doubles in each of his last seven outings.

“We’re going to get a huge challenge with Ristić and Ayton,” Alford said. “That’s as big a post challenge as we’ll have all year, but we’ve been very good there. It’s about taking away the middle drive. … We’re still getting beat on middle drives too much.”

Between Trier and fellow guards Rawle Alkins and Parker Jackson-Cartwright, the Wildcats have plenty of wings capable of taking advantage of that weakness in the middle.

UCLA will also have to contend with the crowd at the McKale Center, where Arizona is 12-0 this season.

“It’s an incredible environment there for sure,” said senior center Thomas Welsh. “It’s one of those things that you really have to experience to understand what it is.”

UCLA pulled off an upset win on the road last year, staging a second-half comeback to win 77-72 at Arizona, but this year’s team has looked lost away from home at times, going 1-4 in true road games this season.

In two of those road losses – against Michigan and Stanford – UCLA held late leads before faltering down the stretch. In another, at Oregon State, the Bruins hung even with the Beavers for most of the second half but wilted in the final minutes.

“We folded down the stretch at Michigan and I think that being our first road game for most of our guys had a lot to do with it,” Alford said. “And maybe some of that same stuff happened at Stanford because we hadn’t had a lot of true road tests. … I hope we’ve had enough road games now with all these new guys.”

A win, especially over an opponent like Arizona, would go a long way in building UCLA’s NCAA Tournament resume.

“Every game from here on out is pretty big,” said freshman guard Kris Wilkes. “I feel like we need to win every game.”