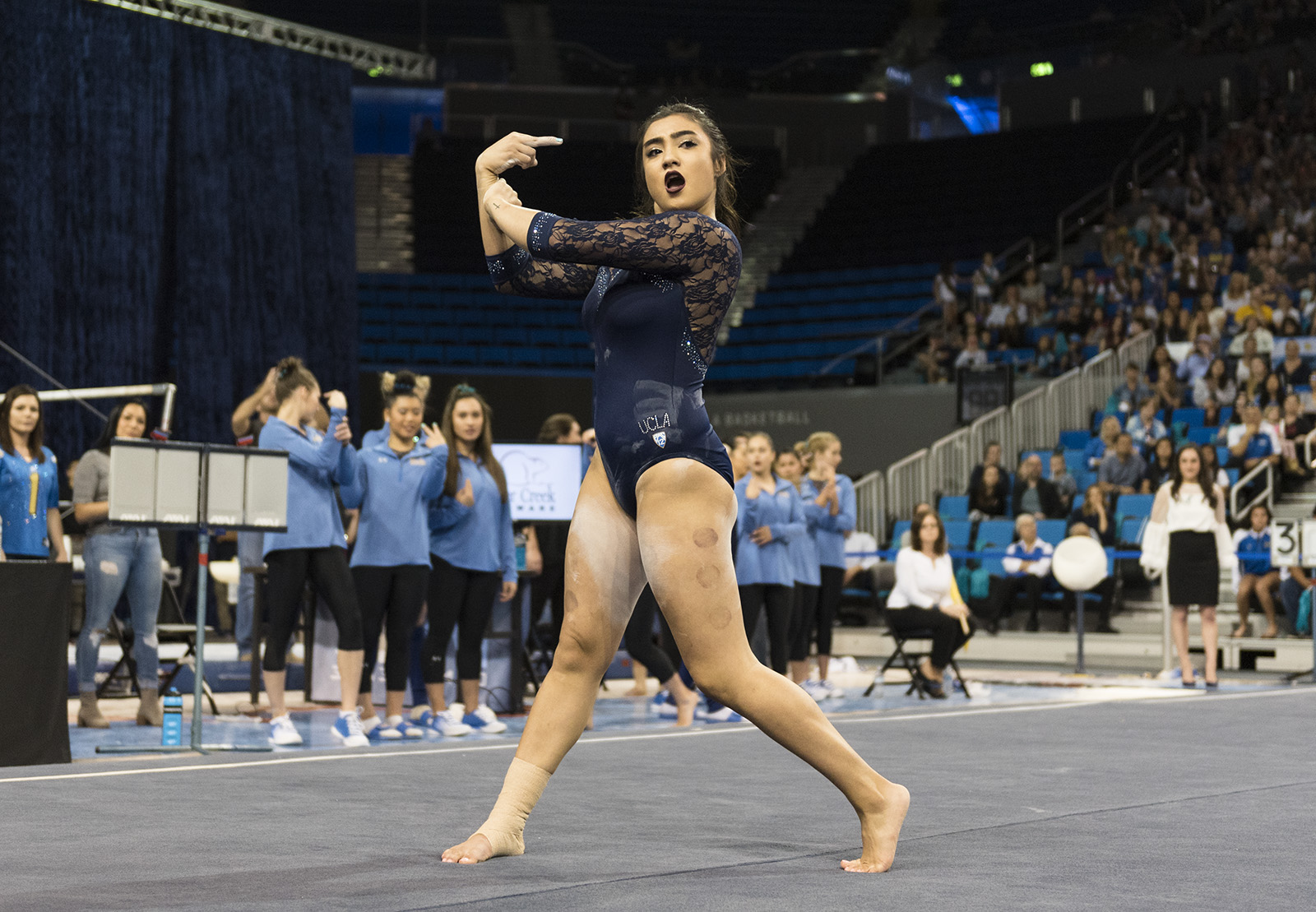 Nearly 10,000 fans came to watch No. 4 UCLA gymnastics take on No. 1 Oklahoma in a meet that celebrated a sport reeling from a high-profile sexual abuse scandal.

A celebration they got.

“It was back and forth, back and forth,” said redshirt senior Peng-Peng Lee. “When we gathered by the beam to collect the (Together We Rise) T-shirts after, we all just looked at each other and said, ‘That was so much fun.’”

The Bruins jumped out to an early lead on the strength of four consecutive 9.9-or-higher vaults, but fell behind after a shaky second rotation on the uneven bars. The Sooners put up a big number on the vault – including a 10 from Brenna Dowell.

Miscues from Oklahoma on the floor and a strong UCLA balance beam performance tied the score after three events. Lee closed the rotation with her second consecutive perfect score on the apparatus.

That’s when the real fun began.

Following three consecutive 9.875 scores to start the floor rotation, sophomore Felicia Hano stepped up. She hit all of her tumbling passes and turned in an enthusiastic and energetic performance. The judges gave her a 10.

Oklahoma’s Anastasia Webb answered with a 10 of her own on the balance beam.

Junior Katelyn Ohashi took her turn on floor. She fell on the uneven bars earlier, but she showed no signs of frustration or a loss in confidence. Her display also earned another 10.

The Sooners’ Maggie Nichols – who was honored for being one of the many gymnasts to speak out about sexual abuse – clinched the meet for her team with yet another perfect score.

The entire arena was in a frenzy.

“This is probably the loudest it has ever been since I’ve competed,” Ohashi said. “It was really cool to see everyone all in for (the sport and) the survivors.”

UCLA ended the meet with a season-high 197.950. The team also suffered its first loss of the season. However, according to Lee, the meet results took a backseat behind the celebration.

“Despite the win or loss, we competed for a much bigger purpose than our own team,” Lee said. “It was for everyone – survivors and those who have spoken up. I think it came from the heart and love of gymnastics.”

Coach Valorie Kondos Field believed the meet was the perfect example of what a sporting event should be.

“What we saw here is what sports should be about,” Kondos Field said. “Two teams doing everything they can – every little quarter-chance – to win a competition, but with the full respect for each other and the full respect of each other’s teams and coaching staffs.”