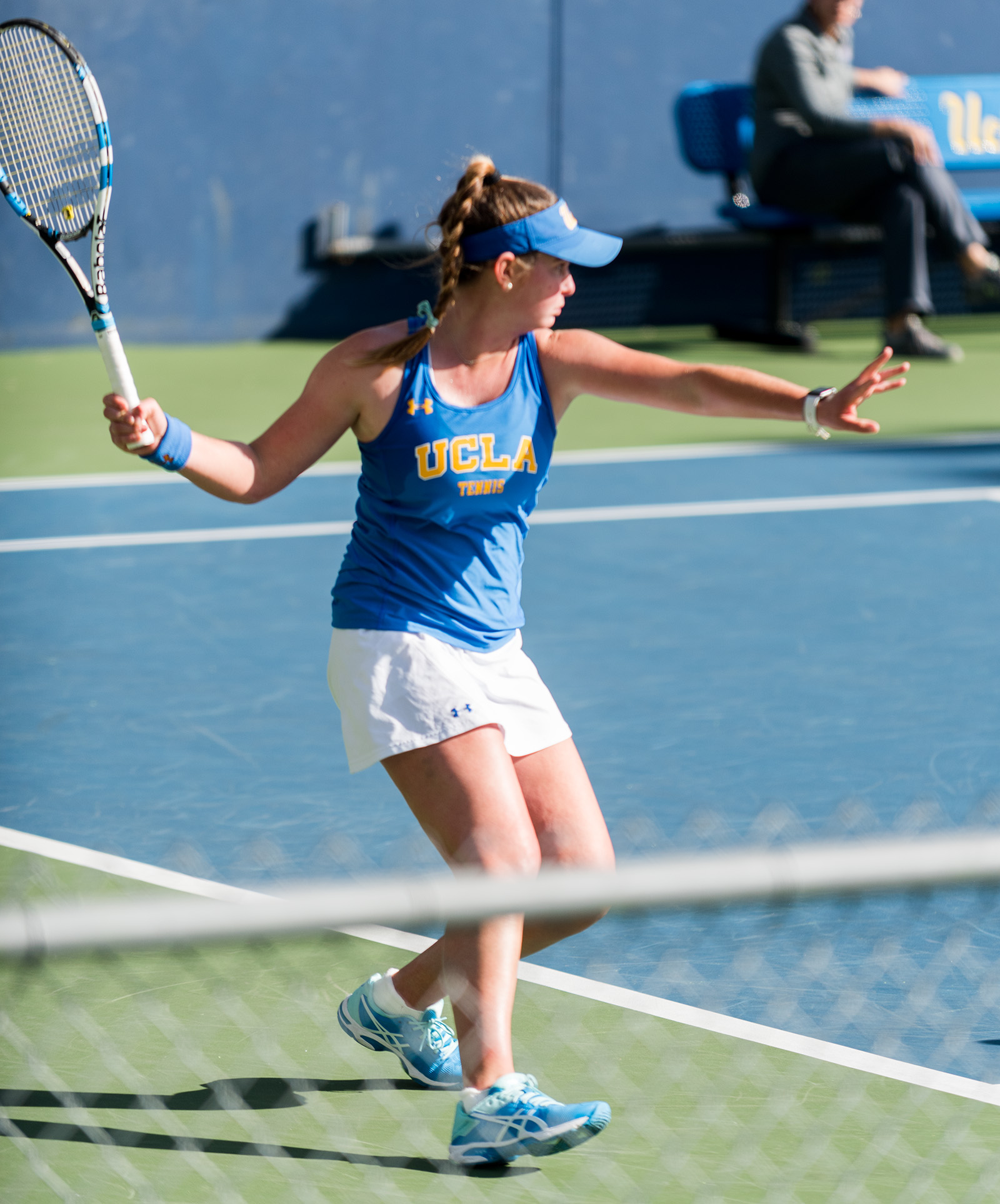 The Bruins tried out new doubles pairings and in doing so, secured the doubles point. While redshirt sophomore Jada Hart and senior Terri Fleming played the majority of last season together, their court one appearance was a change from the usual No. 7 combination of Hart and sophomore Ena Shibahara. Additionally, the pair of freshman Abi Altick and junior Alaina Miller as third doubles was a first.

Coach Stella Sampras Webster is still looking to adjust as the team moves toward the 2018 ITA Division I National Team Indoor Championships in Madison, Wisconsin, next weekend.

No. 46 Altick made her doubles debut for the Bruins, partnering with Miller. Though the freshman ended the day with two unfinished matches due to quick finishes on other courts, she said she was content with her performance.

“I was really excited to play my first doubles here,” Altick said. “I think it went alright. There’s still a lot to improve on – getting comfortable at the net, mainly.”

Sampras Webster said she is confident in Altick’s abilities and is open to moving the freshman into the doubles lineup next weekend as the team heads to the national indoor championships.

“(Altick) is a really good doubles player so I want to give her as much experience to play doubles as possible this year. So, whenever I can, I’m going to put her in,” Sampras Webster said. “Who knows, she may have to maybe put in (at) Madison, and so giving her a match here, hopefully helps her for any opportunities she may have in the future.”

With the doubles point under their belt, the Bruins swept the Gaels in singles, leaving three matches unfinished after three straight victories. One of those wins came in junior Ayan Broomfield’s 6-1, 6-4 defeat of Kareena Manji on court three.

Broomfield has consistently been giving the Bruins an early lead, as she is undefeated in both singles and doubles and has been the first to finish in two of the first four matches.

“I know that it’s really good when you have some momentum, getting the doubles point and the first singles point, or just your singles point in general,” Broomfield said. “It really helps out the team, takes some pressure off the rest of the girls.”

No. 119 Hart played on court one, in place of No. 16 Shibahara who was resting a pulled hamstring, and defeated Marila Kozyreva 6-2, 6-3.

“The coaches keep me motivated playing at the number-one spot just because there are a lot of expectations playing at the top two positions,” Hart said. “I’ve just been enjoying it, enjoying the opportunities of playing at number one.”

With Friday’s match in the books, Sampras Webster is looking forward to the national indoor championships next weekend, in which her players will get a taste of what’s to come.

“I’m really glad they’re going to experience (the championships) because this is what NCAAs is going to be like,” Sampras Webster said. “The level is going to be really high, and it’s great for them to see that this is what we’re playing for and what we need to do if we want to be successful.”

UCLA’s season is off to a good start, but next weekend’s tournament will be a test of its strength as the Bruins face a bracket of teams all ranked in the top 25.