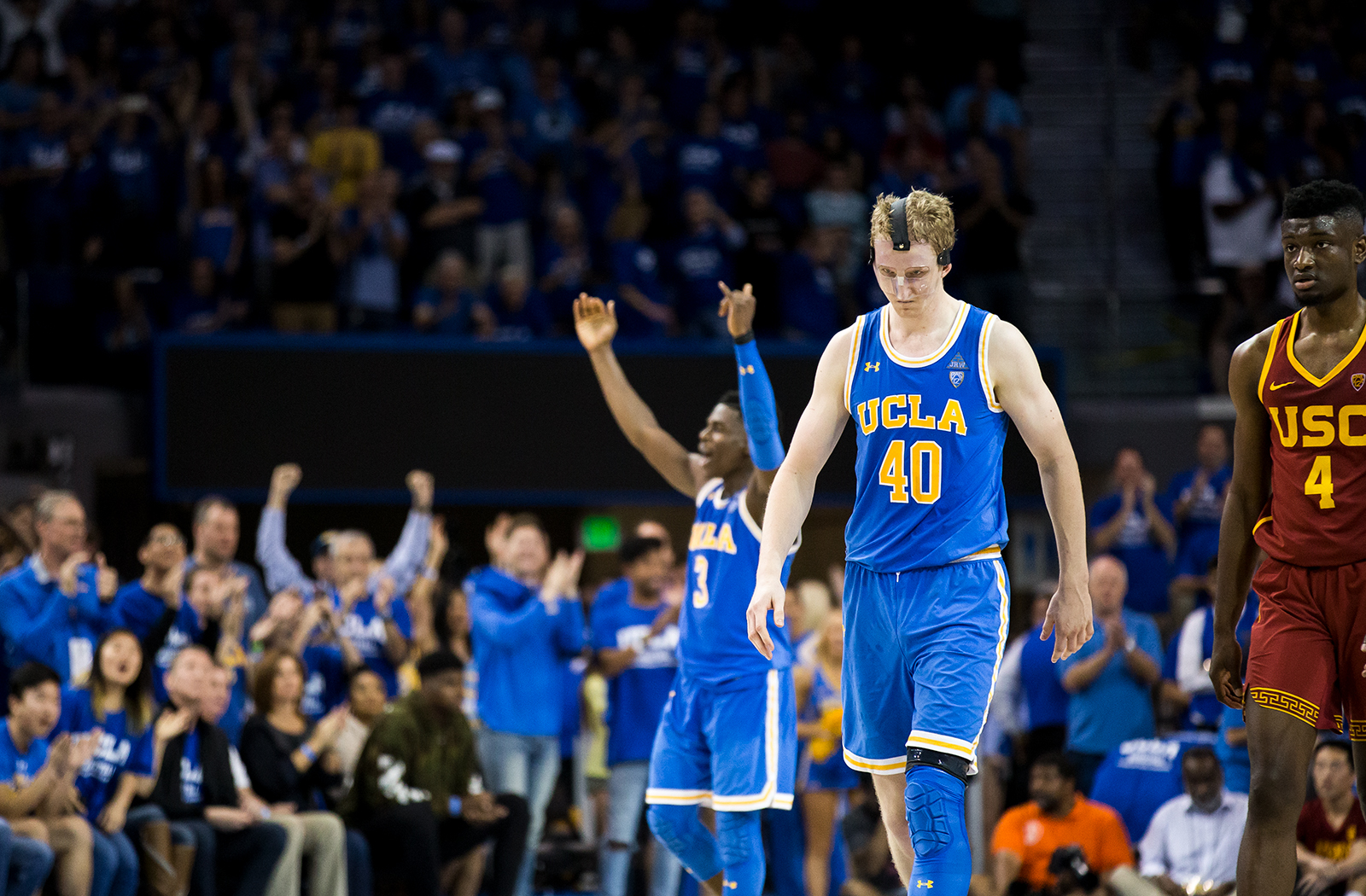 The men of Troy were no match for the masked man.

Senior center Thomas Welsh, still donning a fitted face mask after breaking his nose, hit a go-ahead 3-pointer with less than a minute remaining and two free throws to ice the game with 11 seconds left.

“We got some really big stops in the second half and I’m proud of our toughness,” said coach Steve Alford. “ For us to win, I think we’ve grown. We’ve grown a lot in the last two weeks and now we’ve got to take our show on the road.”

Whenever the game looked like it was getting out of hand, the Bruins responded. Down double digits midway through the first half, Alford’s team spun a 14-2 run to tighten the score heading into halftime.

And when UCLA was down 69-60 with about eight minutes remaining, it responded with an 11-0 run to claim the lead.

The two teams then went back and forth over the last five minutes and entered the last 90 seconds tied at 77. But then USC guard Jordan McLaughlin missed a layup, and senior forward GG Goloman grabbed the rebound and Welsh scored the rest of UCLA’s points.

The Trojans pulled down 14 offensive rebounds and held a 16-2 advantage in points off turnovers, but the Bruins mustered enough firepower to overcome that disadvantage.

“We had three straight games of taking care of the basketball and getting high-percentage shots,” Alford said. “It doesn’t mean we made all the shots, but tonight was a game we shot over 50 percent (and) we only had 12 turnovers.”

UCLA finished shooting 50.9 percent from the floor and 46.2 from beyond the arc. Junior guard Aaron Holiday made five of his seven 3-point attempts, as he led the Bruins with 23 points on 7-of-10 overall shooting.

Trojan forward Chimezie Metu only scored 11 points on 4-of-11 shooting, in part to the Bruins’ diligence defending his screens.

“One thing they really emphasize is the middle pick and roll, especially throwing lobs up to him,” Welsh said. “Just this whole week we’ve been focusing on trying to take that opportunity away just by being better in pick and roll defense.”

Holiday also provided stout defense against USC guard Jordan McLaughlin, who was held to 5 points – more than 7 below his season average.

It was an all-around, 40-minute effort for Holiday.

“I don’t feel like I shut him down, I just tried my hardest just to stay in front of him,” Holiday said. “I just wanted him to work for everything. … I think I did a pretty good job.”

Free throw shooting proved crucial yet again in crunch time for the Bruins.

With just under five minutes remaining, redshirt sophomore Alex Olesinski and Trojan forward Nick Rakocevic got tangled up while fighting for a rebound under the USC basket. The referees called a flagrant foul on Olesinski and a technical on Rakocevic, but the Trojan missed both of the free throws while Holiday made both of UCLA’s to tie the game at 69.

Goloman then missed the front end of a one-and-one with 30 seconds left, but Welsh’s heroics sealed the game.