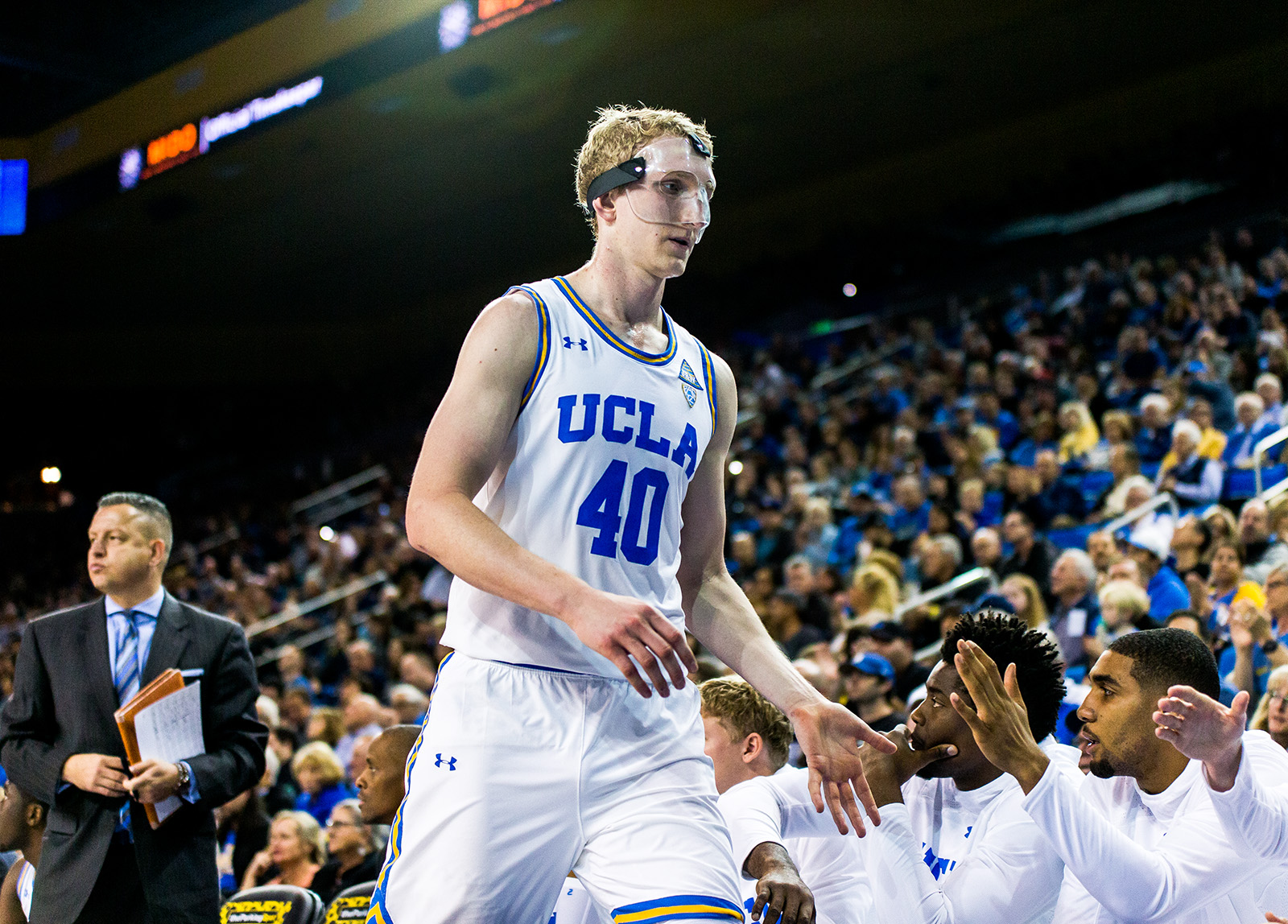 For most of the year, the most interesting storylines surrounding UCLA and USC men’s basketball have been off the court, with the Bruins’ season defined by the early-season incident in China and the Trojans’ by the stain of connections to the FBI’s investigation of bribery in college basketball.

But as Saturday’s meeting between the teams approaches, the on-court rivalry looks plenty worthy of attention.

In its battle for a berth in the NCAA Tournament, UCLA (15-7, 6-4 Pac-12) would help itself tremendously by knocking off a red-hot USC (17-6, 8-2) team that enters Pauley Pavilion on a six-game winning streak.

It’s not quite the matchup people expected at the start of the season, when the Bruins were ranked in the top 25 and the Trojans in the top 10. But USC is second in the Pac-12 and UCLA fourth entering the weekend.

“It’s going to be a great game,” said senior center Thomas Welsh. “With a rivalry game, it’s always going to be intense but I think it will have a little more weight to it just because both teams are in the upper echelon of the conference.”

The Bruins’ questionable defense will be put to the test against a Trojan offense that features a handful of strong options.

“They’re hard to guard because they have so many guys that can score,” said coach Steve Alford. “They’ve got guys that can pass, shoot and dribble it and they’re very athletic to go with that.”

USC point guard Jordan McLaughlin runs the show offensively, pacing the Pac-12 in assists per game with 7.6 in conference play. Perhaps his favorite target is springy 6-foot-11 forward Chimezie Metu, who leads the Trojans with 16.0 points a night on 51.1 percent shooting.

Pick-and-rolls between McLaughlin and Metu are an especially effective option for USC’s offense, with McLaughlin’s passing and Metu’s dunking ability putting defenses in a bind.

“That’s one thing that I think (Metu) has been really, really efficient with,” Welsh said. “That’s something we’re trying to take away from him … (by) just pressuring the ball-handler and just being ready help-side defensively.”

It’s still unclear whether versatile 6-foot-10 forward Bennie Boatwright will play, as he’s missed the Trojans’ last two games with plantar wart issues in his foot. But even without Boatwright, who averages 15.1 points per night, McLaughlin has a plethora of options to find.

Guards Elijah Stewart and Jonah Mathews are dangerous 3-point shooters, with Stewart connecting on 39.5 percent of his deep looks and Mathews at 44.3 percent.

The Trojans, especially recently, are a strong defensive team as well. In conference play, they rank second in the Pac-12 in defensive efficiency, per KenPom.com, their success driven mostly by a combination of taking the ball away and blocking shots.

USC has forced turnovers on a whopping 24.1 percent of its possessions in Pac-12 play, by far the best mark in the conference per KenPom.com.

“We need to take care of the ball a lot,” said freshman guard Jaylen Hands. “They’re really athletic and long and they’re forcing a lot of turnovers, especially in league play.”

Between Metu’s springiness up front and its cadre of shifty wing players, USC can put tremendous strain on opponents on both ends of the floor with its athleticism.

“It’s a very, very good offensive team that defensively gives you a lot of problems because they’re long, they’re athletic,” Alford said. “They’re a good rebounding team, a good shot-blocking team and they do a good job of mixing man zone to try to keep you off balance.”