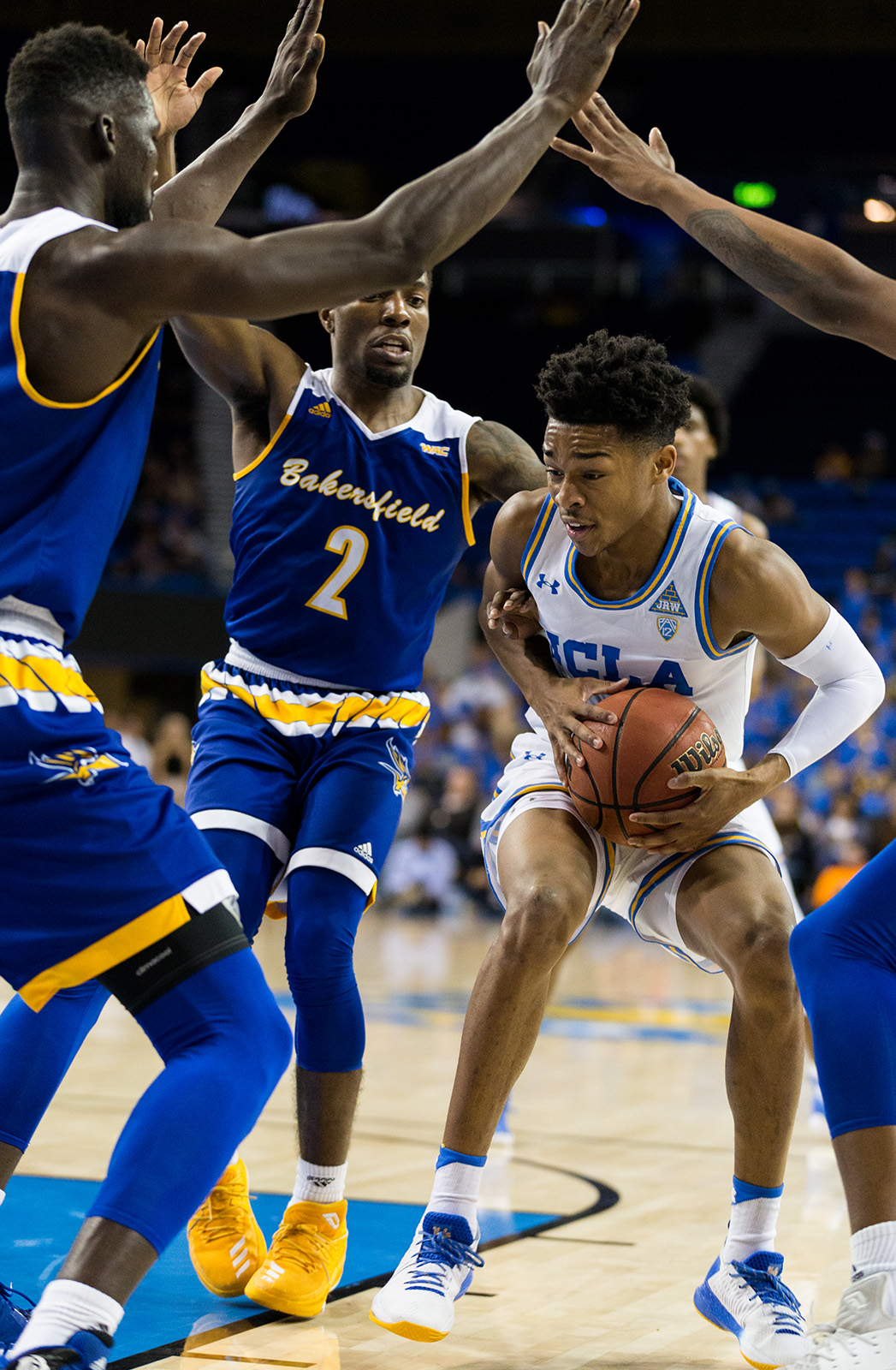 For the first time in a while, UCLA men’s basketball returned to having fun.

There was a Kris Wilkes fast-break windmill dunk – routine by his standards – and a between-the-legs alley-oop pass from Jaylen Hands to Wilkes in the same game, minutes apart from each other.

The freshman guards riled up both the crowd and their teammates, and even coach Steve Alford’s levity shined full-on in the postgame press conference.

A four-guard starting lineup that has played to the strength of the Bruins’ perimeter-heavy eight-man rotation and subsequently reinvigorated their offense.

For now, at least, the four-guard lineup seems to be working after Alford harped on his team’s sluggish starts during its recent three-game losing streak. Colorado, Oregon State and Oregon combined to outscore UCLA by 15 points in the opening five minutes of each half.

But then Hands, who started the first five games of the season before suffering a foot sprain and ceding his spot to redshirt sophomore guard Prince Ali, replaced senior forward GG Goloman in the starting lineup versus Cal last week.

The Bruins have been plus-7 points over the same interval in the two games since, but that doesn’t mean Alford has completely eschewed the two-big man lineup.

But after that, the Bruins transitioned back to its typical three-guard, one-forward and one-center lineup by subbing Goloman in for Ali. In that rotation, Ali and Hands substituted for each other, as did Wilkes and freshman guard Chris Smith while redshirt sophomore forward Alex Olesinski spelled Goloman and senior center Thomas Welsh.

Against Stanford, Goloman was a spark plug once he hit the court. He pulled down an offensive rebound on his first possession and converted a layup while getting fouled on his second possession.

“He got back to doing the things we needed him to do defensively,” Alford said. “At (6 feet 11 inches), we’ve got to have him continue to be a bigger rebounding force and that’s what he’s working on.”

As for Hands, he was already playing more minutes on average coming off the bench than either Goloman or Ali. The freshman averaged a steady 24.6 minutes in the 14 games he didn’t start, while Goloman and Ali averaged 23.6 and 24.2 minutes per game respectively over the same span.

“It’s different in both areas, off the bench and coming off and starting,” Hands said. “But the main goal is to win, so as long as we’re winning I’m cool with whatever.”

Still, there are some questions concerning the lineup’s durability and defense. Wilkes typically guards the opposing power forward in man-to-man defense or half of the baseline in UCLA’s 3-2 zone, and he’s shown that he isn’t quite comfortable in that role yet.

The freshman picked up two fouls within the first six minutes of each first half against Stanford and Cal, sending him to the bench and forcing Smith into early-game action. Following the win over the Bears, Alford said the lineup switch can’t get Wilkes out of the flow having to defend players three or four inches taller than him.

That wasn’t the case versus the Cardinal – Wilkes scored 18 points on 6-of-7 shooting and made both of his 3-point attempts.

“He picked up quick fouls, but he was really efficient,” Alford said. “Regardless of fouls, if he did get out of rhythm, he got back in rhythm because those are two games that he was really, really good.”

Defensive rebounding could also be an issue after Cal registered 19 offensive boards and Stanford recorded nine.

“We just have to go in there and attack the ball,” Holiday said. “Box out, rebound and just fight. Obviously, USC’s pretty big, so we’re gonna have to do that a lot this game.”