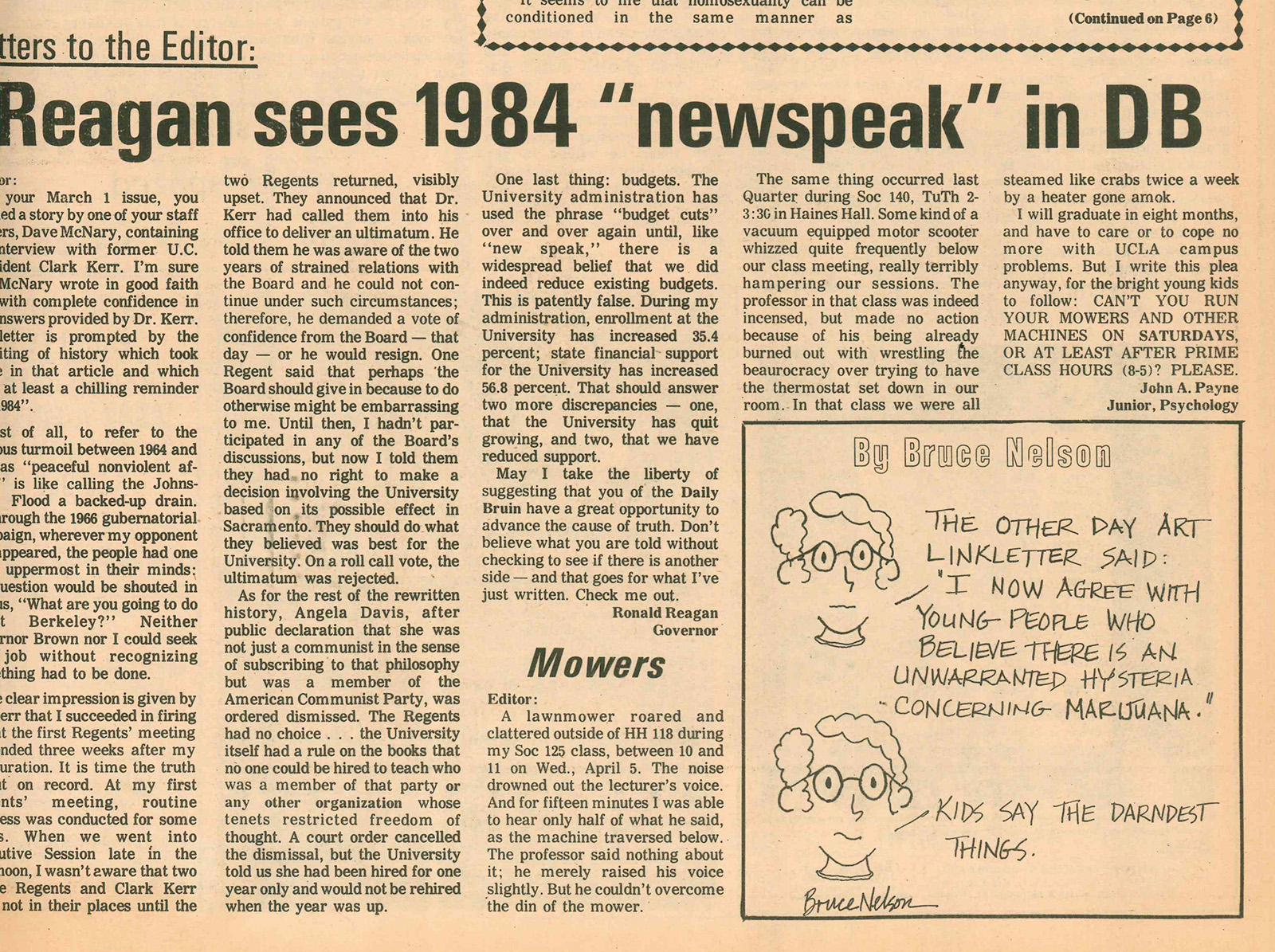 The Daily Bruin Opinion section has a practice of publishing letters to the editor from the general public. The honored individuals who write these letters tend to be politically active students, faculty or alumni who have a burning desire to share their views on notable stories published by the Bruin.

So in fall quarter, when I got a letter to the editor from the University of California Office of the President criticizing me for a column I wrote, I thought I was hot stuff.

What my bumbling ego didn’t realize, however, was that my predecessors in the Opinion section had outdone my badge of honor decades ago. They had somehow managed to garner the greatest letter to the editor of all time: one from then-California Gov. Ronald Reagan.

It gets better: Reagan wrote in accusing the Daily Bruin of “new speak” – the April 1972 version of modern-day “fake news.”

On March 1, 1972, the Daily Bruin ran a story by Dave McNary containing an interview with former UC President Clark Kerr, who was in part fired by the state government three weeks after the governor’s inauguration. Reagan had proposed state funding cuts to the UC – cuts that were later implemented by the California Legislature – and his office had, to some extent, strong-armed the regents into removing Kerr.

But the former president who first coined the phrase “Let’s Make America Great Again” had a different take on Kerr’s removal and the UC’s funding. In his letter, Reagan argued his response was prompted by “the rewriting of history” in McNary’s story, and how it “gave at least a chilling reminder of ‘1984.’”

Those are harsh words. And that’s coming from somebody who didn’t even experience 1984 – the year or the book.

Reagan continued, asserting Kerr’s assessment that he had been fired at the governor’s first regents meeting was mistaken.

“It is time the truth is put on record,” the former president wrote.

He narrated how at the regents meeting, Kerr expressed he had strained relations with the rest of the UC Board of Regents, and provided the members with an ultimatum: either they pass a vote of confidence for his leadership, or he resigns.

“One regent said that perhaps the Board should give in because to do otherwise might be embarrassing to me,” Reagan wrote. “Until then, I hadn’t participated in any of the Board’s discussions, but now I told them they had no right to make a decision involving the University based on its possible effect in Sacramento.”

Those are rich words coming from the head of Sacramento. They seem to have worked, though, since Kerr’s alleged ultimatum was eventually rejected.

But the “supply-side economics” president had more to add.

“The University’s administration has used the phrase ‘budget cuts’ over and over again until, like ‘new speak,’ there is a widespread belief that (the state government) did indeed reduce existing budgets,” he wrote.

What is clear, though, was the former governor’s disapproval of UCLA’s student newspaper.

“Don’t believe what you are told without checking to see if there is another side – and that goes for what I’ve just written,” he told readers. “Check me out.”

These days, we don’t see the California governor frequenting student newspapers that much. The closest the Daily Bruin has gotten to the upper echelons of Sacramento is an interview with UC President Janet Napolitano, and the occasional mechanical response from a state legislator.

Perhaps that’s a sign of the proliferating bureaucracy and growing inaccessibility of Sacramento. But I suppose we won’t be able to know for sure until the end of this year; there’s still the possibility current Gov. Jerry Brown might be reading this and crafting his own letter in rebuttal.