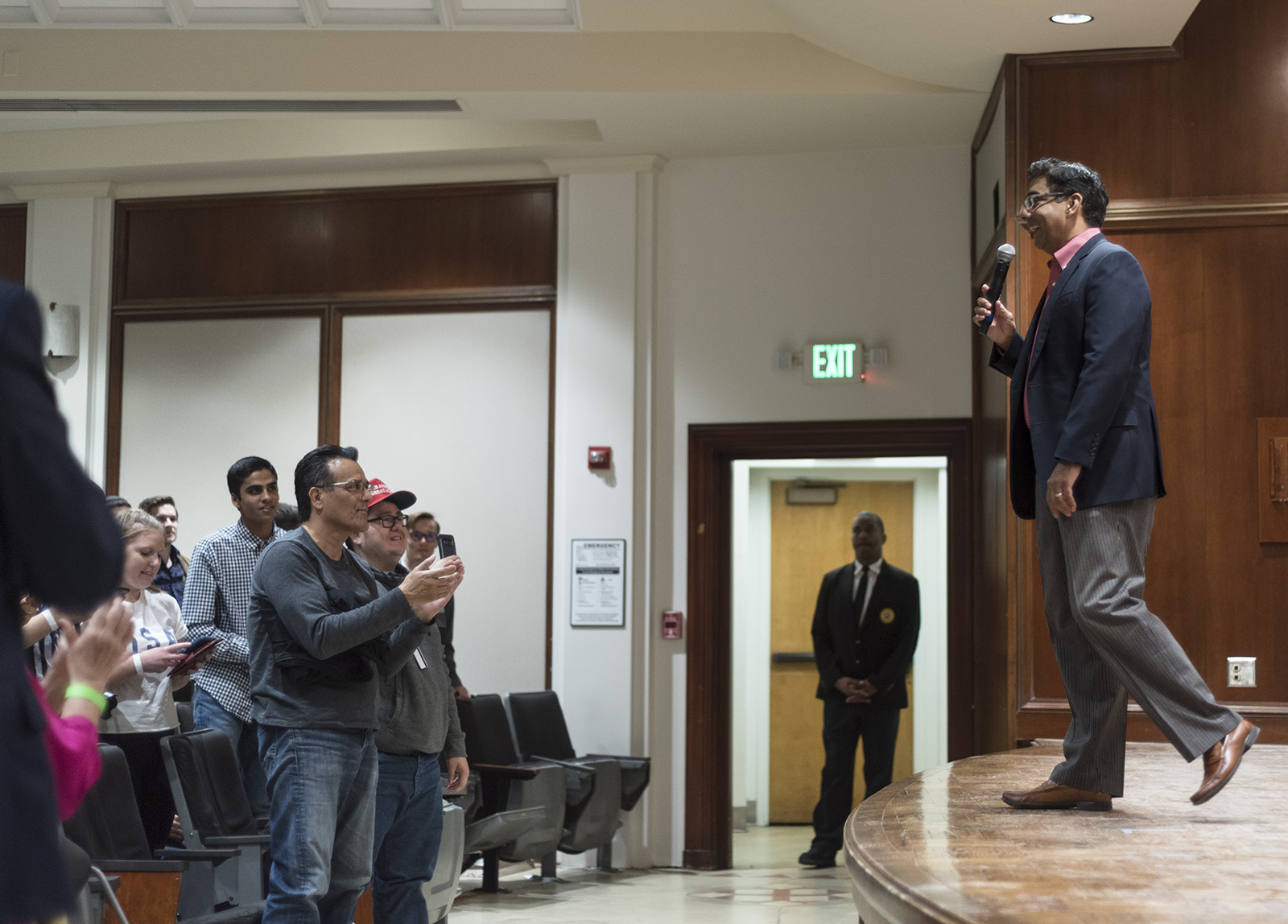 Dinesh D’Souza, a policy advisor for former President Ronald Reagan, said, at a UCLA event, he thinks political correctness and conformity among Democrats is comparable to fascism. (Anthony Ismail/Daily Bruin)

A policy adviser to former President Ronald Reagan said at an event Wednesday he thinks fascism has always been a fundamentally leftist ideology.

Dinesh D’Souza, who worked for Reagan between 1987 and 1988 and is a conservative writer, said he thinks Democrats’ belief in political correctness and conformity is comparable to fascism. About 200 people attended D’Souza’s lecture, “Exposing the Fascist Roots of the American Left.”

Tahmineh Dehbozorgi, a student at Pierce College and California state chair of Young Americans for Liberty, said the organization invited D’Souza to campus so students can hear diverse points of view.

“We are a nonpartisan group that’s on the side of liberty,” she said. “Our goal is to get students more involved.”

D’Souza said he thinks policy debate in America has evaporated because of political correctness.

“American politics has been destroyed by two meteors: the race card and the fascism card,” he said. “Liberals are using these cards to legitimize behavior that would otherwise be unacceptable, such as boycotting the inauguration.”

D’Souza added he thinks nationalism, which he believes President Donald Trump displays, is beneficial for a country’s well-being.

“Other leaders don’t have to say they will put their countries first,” he said. “It’s expected that they will.”

DACA was a program enacted by former President Barack Obama in 2012 that deferred deportation for undocumented individuals brought to the United States as children.

“If immigrants voted Republican, you can bet the Democrats would build the wall faster than Trump,” D’Souza said. “Democrats are betting that what they lose in Kentucky, West Virginia, Wisconsin and Michigan, they’ll gain back in illegal aliens.”

He added he thinks Democratic advocacy for the social welfare of immigrants makes them less likely to vote Republican.

“Democrats are at the top of the ladder telling immigrants ‘Hang on, we’ll pull you up,’” he said. “(Immigrants) will always be beholden to the guy holding the rope. … They’re suspended and they have to vote for the one holding the rope.”

D’Souza said he hopes students will speak up about their conservative beliefs in the media, comedy and academia, all of which he perceives as liberal.

“The reason these big lies are told are because academia, Hollywood and the media are largely controlled by the left,” he said. “These are the three big megaphones of our culture.”

D’Souza said he thinks college campuses have become politically biased institutions and urged students to challenge what they hear from professors and peers.

“Your job is ultimately to make a declaration of independence to this reigning orthodoxy,” he said. “Don’t ask what organization you should join, ask yourself what needs to be done.”

Students at the event said they think the current political climate discourages free speech and plan to speak out more about their conservative beliefs.

Sachrison said YAL will encourage more open dialogue about issues through events such as Freedom Bowl, a debate during which members debate political issues with other students on campus.

“Students can be given a chance,” he said. “We can be the change we want to see.”

“This year, we’re looking to separate ourselves from the alt-right movement,” he said. “We’re not here just to start a riot. Our intention is not to offend.”