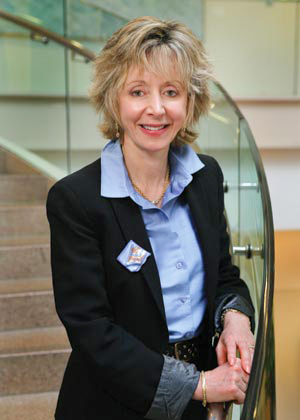 Judy Olian is stepping down as dean of the UCLA Anderson School of Management to become the president of Quinnipiac University in Connecticut.
(UCLA Newsroom)

The dean of the UCLA Anderson School of Management is stepping down to lead another university.

Judy Olian, who has served as Anderson’s dean since 2006, will be leaving her position at the end of the academic year to become the president of Quinnipiac University in Connecticut, said Executive Vice Chancellor and Provost Scott Waugh in a message to faculty and staff Monday.

Under Olian’s tenure, Anderson opened research centers and introduced degree programs, such as the business analytics program launched in the fall. Olian also helped start the Anderson Venture Accelerator, which helps students start their own businesses, and introduced hybrid courses that include online and in-class elements. Waugh said Olian led efforts to increase the gender diversity of faculty and students in the school and added she fundraised nearly $400 million for Anderson.

Waugh said he will appoint an interim dean and added his office will soon be looking for a permanent dean to succeed Olian.