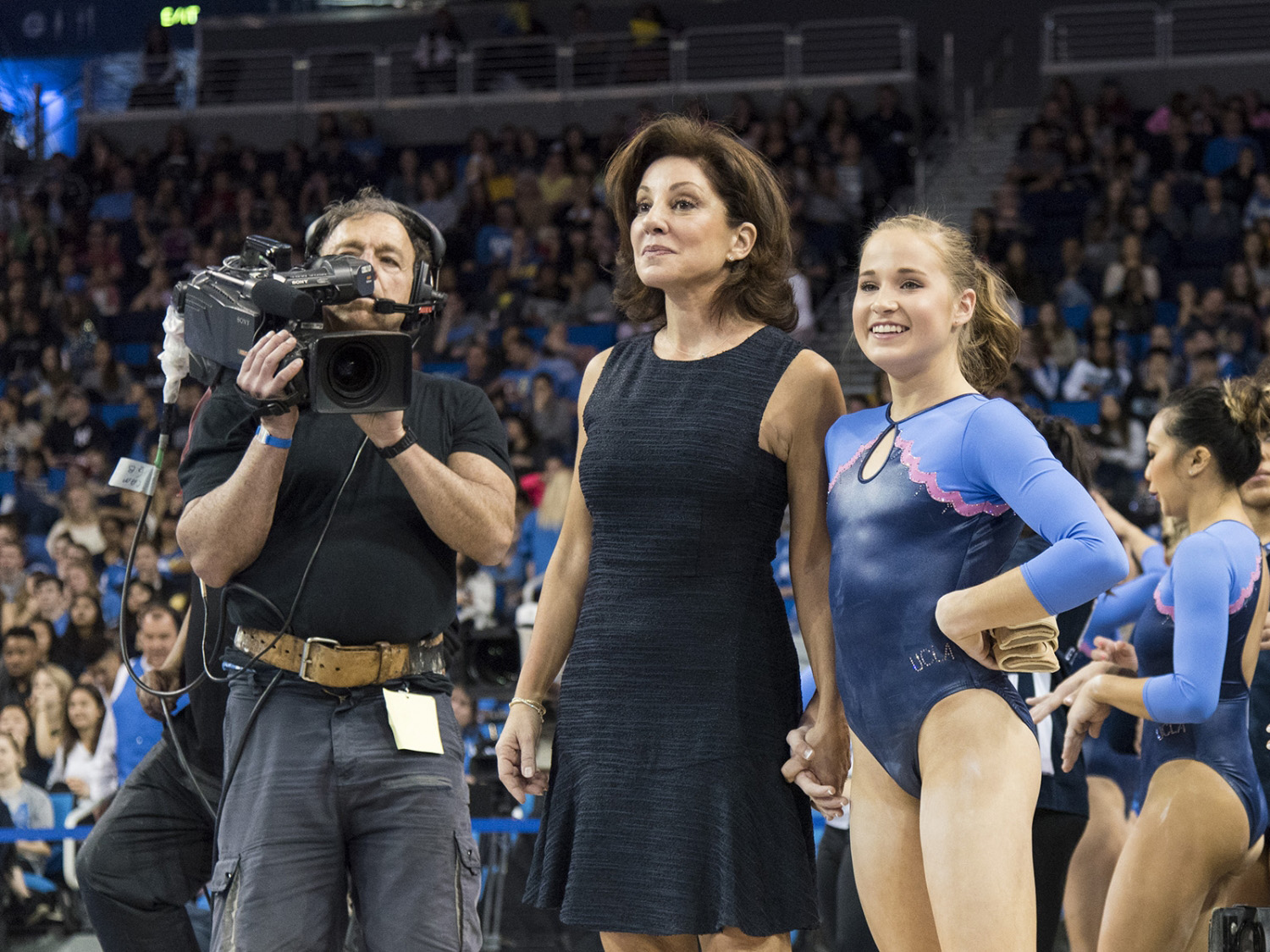 UCLA gymnastics coach Valorie Kondos Field said the color teal is a reminder of the strength of conviction. The Bruins will be distributing teal pom-poms and wristbands at their home meet on Sunday. (Daily Bruin file photo)

Coach Valorie Kondos Field’s primary job is to coach UCLA gymnastics, but in the midst of her team’s unbeaten season, she’s kept an eye on the changes USA Gymnastics has gone through.

Last week, former USA gymnastics team and Michigan State athletics doctor Larry Nassar was sentenced to 40 to 175 years in prison for criminal sexual conduct. Many of the victims shared their feelings and stories in the sentencing hearing, including UCLA assistant coach and former Olympian gymnast Jordyn Wieber.

“I’m so immensely proud of every single victim that’s come out and spoke up with their testimonies because look at what’s happening,” Kondos Field said. “Look at everything that’s happening right now. Not just gymnastics-wise, but other sports as well.”

UCLA gymnastics has been on the road since its meet against Ohio State on Jan. 6 and the gymnasts have worn teal hair ribbons at their past two meets to show support for the women who came forward. Kondos Field said she plans to hold a tribute to the victims at the team’s next home meet against defending national champion Oklahoma on Sunday.

“We’re going to honor the victims of abuse, and we’re turning Pauley teal. Teal is the color of support of abuse victims,” Kondos Field said. “It’s a nice reminder. It’s really not a somber or negative reminder. It’s a reminder of the strength of conviction.”

UCLA will be distributing teal pom-poms and wristbands that say “Together We Rise” and “UCLA Gymnastics” prior to Sunday’s meet. The team will also have a special presentation following the competition.

More than 150 women have said they have been sexually assaulted by Nassar, most of whom are gymnasts. When talking about one of the positives with the victims coming out, Kondos Field noted that the environment that allowed this crime to happen is starting to be taken down by a strong group of young women.

“This whole removing the veil of cover up and abuse started with this army of strong women,” Kondos Field said. “They’re not the biggest, tallest, fastest, most impressive stature. They are these short athletes. They’re the small but mighty.”

The entire board of USA Gymnastics resigned last week. This was their response to allegations they knew about Nassar’s actions and covered them up. Kondos Field said that while this is a step in the right direction, it’s far from a resolution.

“They still need to do more. It’s just one thing,” Kondos Field said. “They’ve got a lot to do. But it’s progress.”