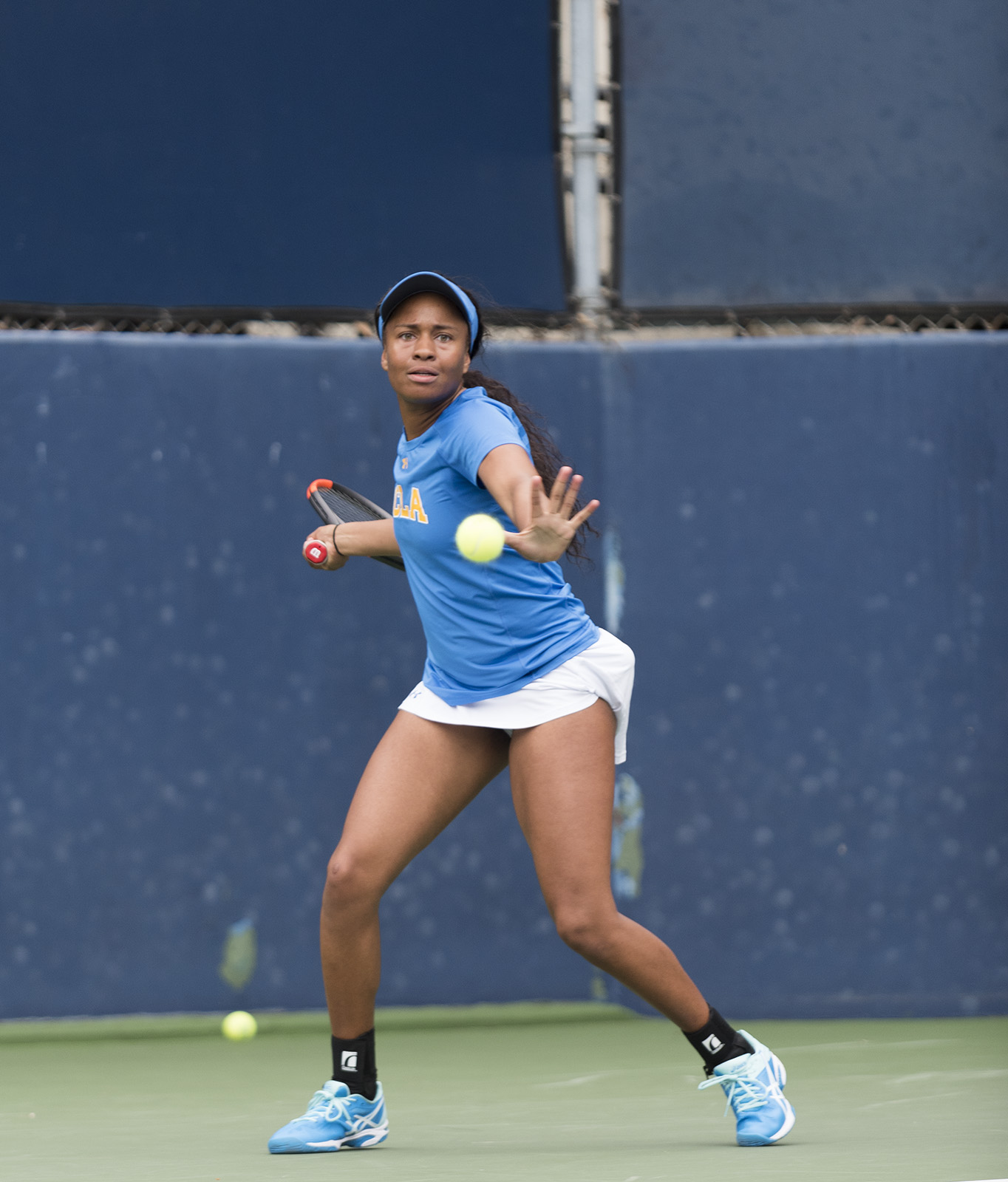 The UCLA women’s tennis team defeated both its opponents despite struggling with the doubles point, punching its ticket to the indoor championships in February. (Jenna Smith/Daily Bruin)

Alaina Miller was once again the deciding factor as to whether the Bruins would reach National Indoor Championships: Only this time, she prevailed.

“I’ve been in that same exact position before.” Miller said. “We were in the final round, about to go to (the championships) and it was down to me, and I lost in the third set. So that’s what was going through my mind.”

In this weekend’s ITA Kick-off Weekend, the junior came back in the last set to defeat Northwestern’s Alex Chatt 6-4, 3-6, 6-4, securing the Bruins a spot in next month’s Indoor Championships.

“It was one of my favorite moments that I’ve had in college tennis.” Miller said.

Miller’s win decided the match, which will go down as coach Stella Sampras Webster’s 400th career win. Sampras Webster, however, said she was just happy to see Miller’s improvement.

“I was just so happy for (Miller) because I know that she really wanted it bad,” Sampras Webster said. “Her freshman year she lost the deciding match to go to team indoors … so I was just really glad that she was the one who clinched it for us as a junior.”

Despite the victory, UCLA conceded some key matches over the course of the weekend. The Bruins’ No. 7 sophomore Ena Shibahara and redshirt sophomore Jada Hart gave up a 2-0 lead, falling 6-2 to North Carolina State’s No. 9 Anna Rogers and Claudia Wiktorin, in a repeat of October’s Riviera/ITA Women’s All-American Championships.

“We knew who the weaker player was over there, but they both played really well,” Shibahara said. “I also think we had trouble holding serves.”

Without a win from its top doubles team in Friday’s match, UCLA had to fight to earn the doubles point.

“It was surprising, but it was a good lesson for the whole team to learn, that we can’t depend on anyone to win at these tournaments.” Sampras Webster said.

“Seeing the other two courts split the matches, (Fleming) and I both knew that it would come down to our match,” Broomfield said. “I think we both did really well combating the pressure to play as freely as possible.”

However, in Saturday’s match against the Wildcats, Shibahara and Hart once again lost their match, falling to Northwestern’s No. 4 Erin Larner and Maddie Lipp 7-5. This time, the rest of the team was unable to earn the doubles point.

“I think going forward what’s important is our doubles point, making sure that we get that so we have momentum going into singles.” Shibahara said.

Regardless of the weekend’s outcome, Sampras Webster said she is looking to implement changes in the doubles round as the Bruins move forward.

“We may need to mix up our doubles teams – they may not be the teams that we feel are strongest,” she said. “Also, playing indoors, especially in doubles, we need to be able to make adjustments quicker, add some variety to our returns and try different formations when we’re serving.”

If changes are to be made, they will be on display Friday when the Bruins take on St. Mary’s at home.