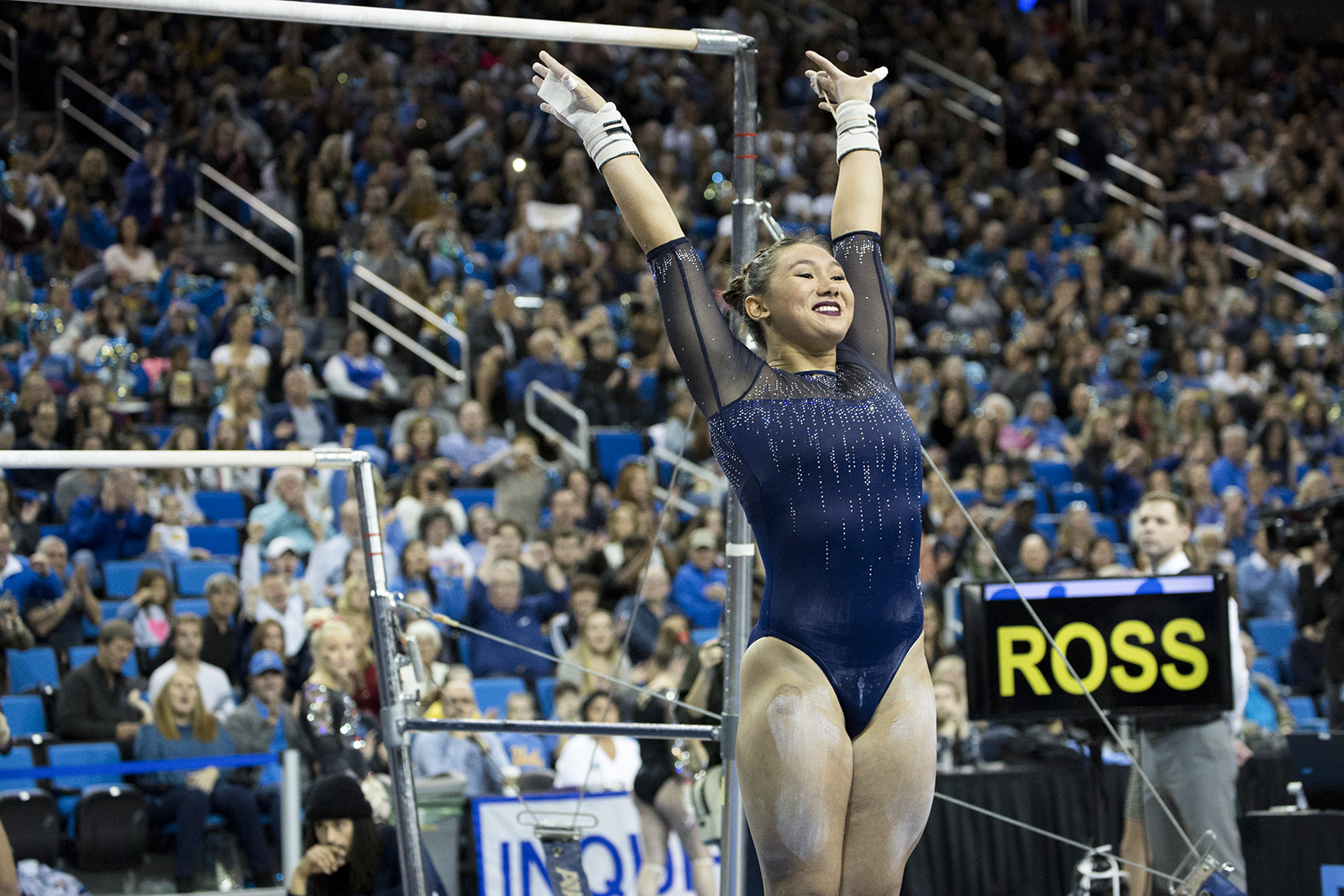 Sophomore Kyla Ross won the all-around with a score of 39.700. She scored above a 9.9 on three events, highlighted by a 9.975 on balance beam. (Amy Dixon/Assistant Photo editor)

The Bruins extended their perfect start to the season and set a new bar for themselves.

The Bruins beat their previous season high of 197.300. Coach Valorie Kondos Field emphasized focusing on the small things to improve scores across the table.

“We’ve just been paying attention to details. We preached to them ‘Let’s get 1 percent better everyday,” Kondos Field said. “What I think is really impressive is when someone does make a mistake, nobody freaks out about it. They just hit the refresh button and keep going.”

Sophomore Kyla Ross won the all-around competition after being limited to just the uneven bars last week. She finished with a final score of 39.700, highlighted by a 9.975 on balance beam.

“This past week, during our team meeting, we had two ex-UCLA gymnasts come talk to us,” Ross said. “They told us how they approached each season and what their mindset was. I think that helped the whole team get the win last night.”

Redshirt senior Peng-Peng Lee scored a 10.0 on beam, the second 10.0 of her career on this event. After landing, her team rushed to her to celebrate the feat.

“It felt amazing,” Lee said. “When the girls ran up to me, that was more of a 10.0 feeling than the actual judges writing it down. When all of my teammates gave me the biggest hug, that’s always one of the best feelings in the world.”

The Bruins started on uneven bars, falling behind the Tigers after scoring a 49.200. They improved on last week’s score on the balance beam, an area of focus for Kondos Field, scoring a 49.625. Emphasizing the details in practice after a lower score two weeks ago, Kondos Field said she is still pushing them to be better.

“I have stayed on them,” Kondos Field said. “I have not taken my foot off the pedal on that one.”

With the lead in hand, UCLA finished on floor and vault, scoring 49.40 on both to round out the victory.

This was the Bruins’ second podium meet of the season. Kondos Field said the earlier experience on a bouncier surface helped the Bruins in this meet.

“There were some problems in warm-ups with the balance of the bars,” Kondos Field said. “I think them having been on (podium), they knew not to freak out, take a breath, calm down and feel the bars.”