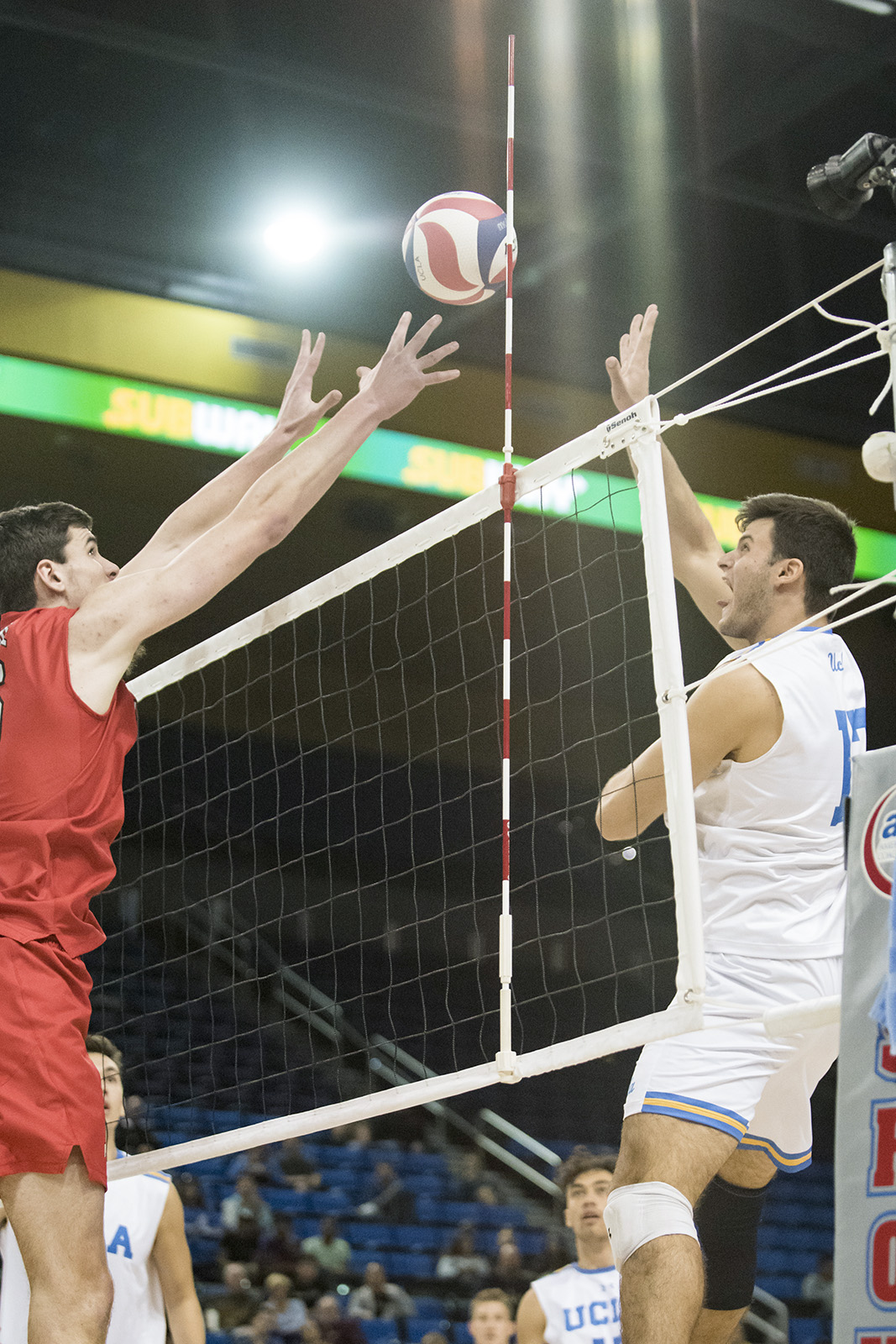 Junior outside hitter Dylan Missry and No. 2 UCLA logged its first loss of the season Friday against No. 3 Hawai’i. None of the Bruins were able to earn 10 or more kills. (Axel Lopez/Daily Bruin)

UCLA managed to take the first set 25-23, but its lead stopped there.

“We had some opportunities we didn’t capitalize on to potentially win that second set,” said coach John Speraw. “I think that gave the (Rainbow Warriors its) confidence.”

The Bruins proceeded to lose the following three sets by scores of 23-25, 23-25, 19-25. Senior opposite Christian Hessenauer said a lot of UCLA’s problems came from too many errors, especially in serving. The Bruins had 23 service errors on the night.

“(Serving is) something that we continue to talk about but not necessarily solve,” Speraw said. “We’re going to have to continue to really reflect on how we’re training and how we continue to devise a philosophy that works well for the team.”

No UCLA athletes reached double digits in kills on the match while three players from Hawai’i had at least ten kills. Sophomore middle blocker Daenan Gyimah led the Bruins in kills with nine, followed by junior outside hitter Dylan Missry and Hessenauer with eight and seven, respectively.

On the Rainbow Warriors’ side of the net, setter Joe Worsley led a varied offense and recorded a double-double with 36 assists and 14 digs.

“I thought Worsley was really great for them, as was (libero) Larry Tuileta,” Speraw said. “I think both those guys really made a big difference on the volleyball court tonight.”

Both Hessenauer and Speraw attributed the loss to Hawai’i being better at making in-game adjustments.

“Overall, they schemed us a lot better and we were not adapting very quickly, which in the long run that does not help,” Hessenauer said.

Speraw said that one way in which the Rainbow Warriors out-schemed the Bruins was with short serves at the end of the fourth set that the Bruins handled poorly.

While UCLA had already faced two top opponents in No. 3 Ohio State (4-2) and No. 6 UC Irvine (8-1), the Bruins were the Rainbow Warriors’ first top-10 opponent of the season.

“My focus is to get the team into video and to start having some conversations about what we saw and decisions that were made and get to the why of it,” Speraw said. “I think this is potentially great for us – I think we probably need continuous stress and obviously we had a lot of it tonight.”