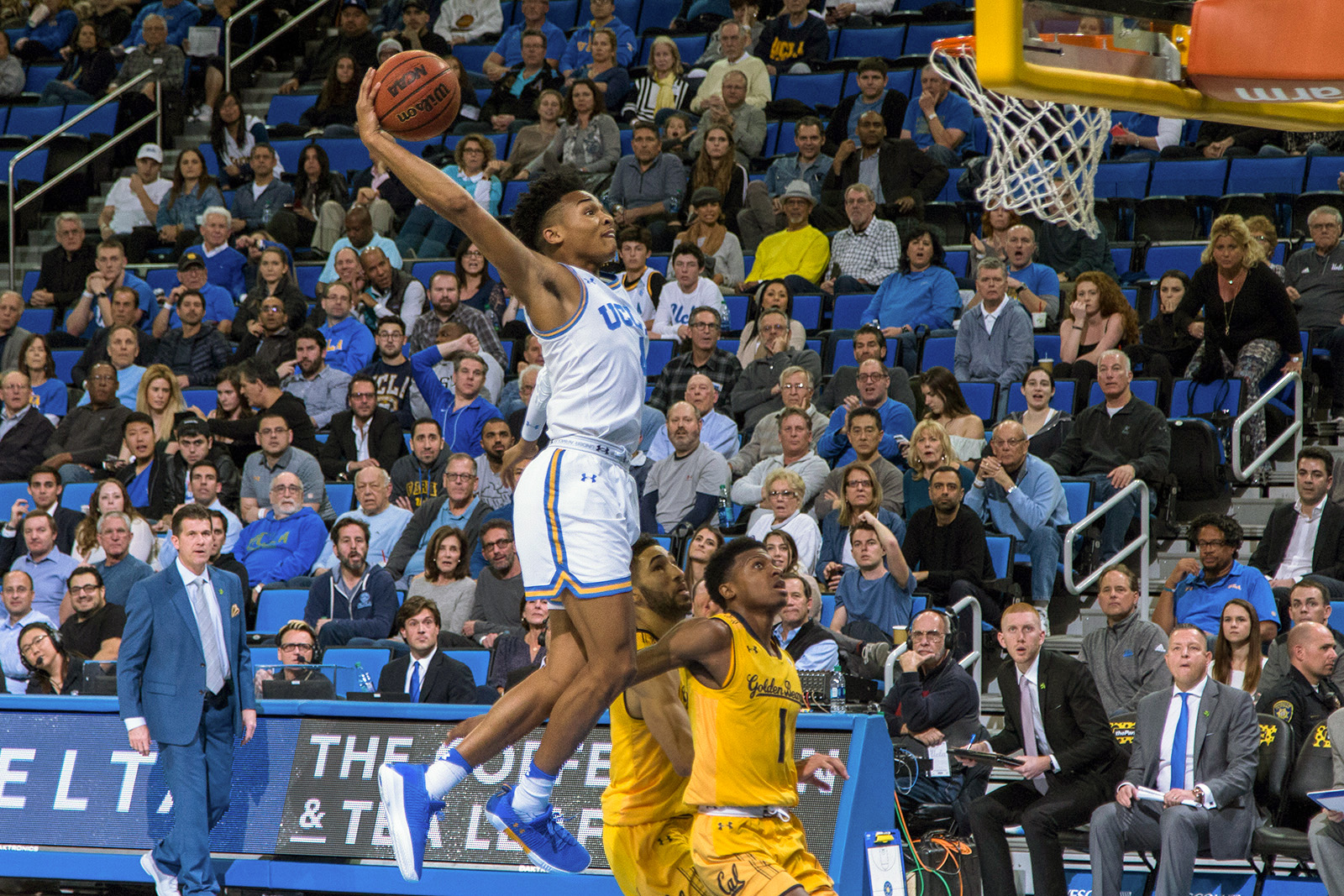 Freshman guard Jaylen Hands finished second on the Bruins with 14 points in Thursday’s content, shooting just 4-of-12 from the field but knocking down 5 of 6 free throws. (Owen Emerson/Daily Bruin senior staff)

Already in the midst of a three-game losing streak, UCLA men’s basketball (14-7, 5-4 Pac-12) was trailing by double digits midway through the first half against the Pac-12’s last-place team, California (7-14, 1-7), when senior center Thomas Welsh headed to the locker room with a sprained left knee.

Instead of wilting without Welsh, though, the Bruins finished the half on a major run to take a lead into halftime.

Welsh returned to the court in the second half and UCLA closed out Cal 70-57 to snap the three-game skid.

“Tonight, I thought we really fought,” said coach Steve Alford. “We’ve spent the better part of three days really trying to get back to our identity and who we are. Offensively, we haven’t been that far off in those three losses but defensively, I think we’ve been way off.”

UCLA’s defensive numbers were certainly better Thursday than in any of its three previous outings, though Cal’s league-worst offense may have helped.

The Golden Bears mustered just 35.5 percent shooting on the night en route to an offensive rating of 85.1 points per 100 possessions, and UCLA also forced 15 turnovers to help offset the fact that Cal grabbed 19 offensive rebounds.

The Bruins made the comeback in the first half with an 18-0 run that included a six-minute scoreless stretch from the Golden Bears, entering halftime up by seven points.

“We really came alive after (Welsh’s injury) just to play for (Welsh),” said freshman guard Jaylen Hands. “We didn’t know how bad it was. Just for him to go down like that, we really thought we had to step it up.”

Cal would fight back in the second half, momentarily retaking the lead with around twelve minutes left. The Golden Bears then went dry from the field, not scoring for over four minutes and allowing the Bruins to embark on a 25-8 game-ending run.

“We didn’t get the stops that we needed to start both halves,” Alford said. “Then once we settled down defensively – the last three, four-minute games of each half, we were really good defensively … we got some stops, we relaxed a little bit, started making some shots and our energy picked up.”

Junior guard Aaron Holiday led the offensive charge with 21 points on 5-of-8 shooting, making nine of his 10 free throws, and added six assists. Hands and freshman guard Kris Wilkes supplemented the scoring with 14 and 10 points, respectively.

Welsh, who still plays with a mask on his face after breaking his nose twice in the past five months, finished with seven points and five rebounds in 26 minutes of action. Alford said he was unsure what the course of action would be for Welsh going forward.

“(Welsh’s) worked so hard,” Alford said. “He’s wore a mask in every league game but two and he just continues to get a double-double. Tonight, he ended up getting seven and five. Came back and made some huge plays for us – both offensively and defensively. Dives on the floor for a loose ball in the second half.”

Senior forward GG Goloman also provided a spark while Welsh was sidelined, earning the praise of his coach and his teammates. In Goloman’s 27 minutes on the court Thursday, the Bruins outscored the Golden Bears by 17 points.

“When Tom got hurt, I told (Goloman), ‘Hey, it’s your time now, you’ve got to step up,’” Wilkes said. “(Goloman’s) a great player – he’s just scared to mess up sometimes and he’s just got to go out there and play. When he just goes out there and plays, you see what he can do.”