Throwback Thursday: Hunt for roommates has proved to be difficult throughout housing history 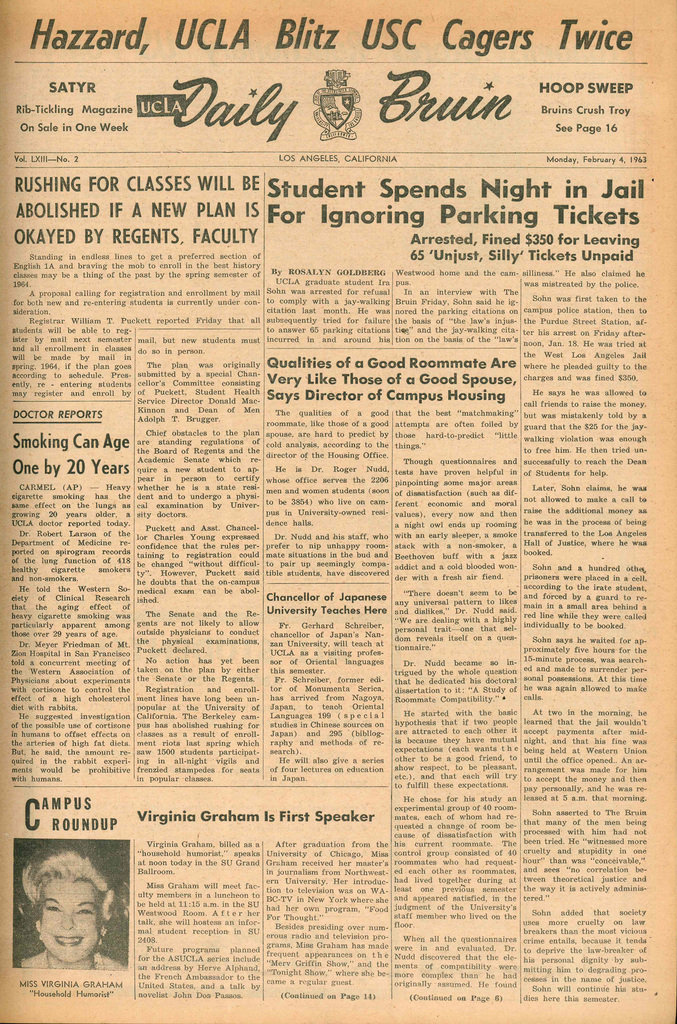 UCLA Housing director Roger Nudd tells students on the Hill that a good roommate has the qualities of a good spouse. (Daily Bruin Archive)

Have you ever loved your roommate so much you considered them your spouse?

UCLA Housing believed this was the gold standard for rooming back in the 1960s.

On Feb. 4, 1963, the Daily Bruin reported that Roger Nudd, then-director of UCLA Housing, said the qualities of a good roommate are those of a good spouse.

Similar to today, Bruins applying for on-campus housing in the 60s had to complete a roommate questionnaire in order to find the perfect “match,” or possible soulmate. Nudd praised the process for pinpointing areas of major satisfaction, such as difference in economic and moral values, but claimed the best “matchmaking” attempts were foiled by those hard-to-predict “little things.”

“There doesn’t seem to be any universal pattern to likes and dislikes,” Nudd said. “We are dealing with a highly personal trait – one that seldom reveals itself on a questionnaire.”

Nudd was so intrigued by the relationship between roommates that he dedicated his doctoral dissertation to it.

He began his study with the basic idea that if two individuals are attracted to each other, it must be because they have mutual expectations and trust that they will try to fulfill what they expect. Sounds a lot like marriage vows, right?

Nudd chose an experimental group of 40 people, all who requested a change of room because they were dissatisfied with their previous roommate. His control group also consisted of 40 people, composed of those who had requested each other as roommates.

“Since dissatisfied roommates tended to have a different image of themselves than their roommates had of them,” he said, “it was concluded that some of their failure to meet expectations were due to faulty perception of their roommates’ feelings.”

Furthermore, Nudd noted that religion and race did not play a role in creating tension between roommates. “In fact, they seldom create problems.” he said, “And when they do, the friction generally disappears after a couple of weeks of living together.”

Of course, this was not always the case for certain circumstances. Nudd reported many roommates of different races lived in harmony until their parents arrived and began to stir trouble, just like what in-laws would do.

Fifty-five years later, roommate compatibility is still taken seriously by Bruins. Whether it is digging through Facebook pages dedicated to searching for roommates or opting to live with a close friend, students are no doubt looking for their perfect match.