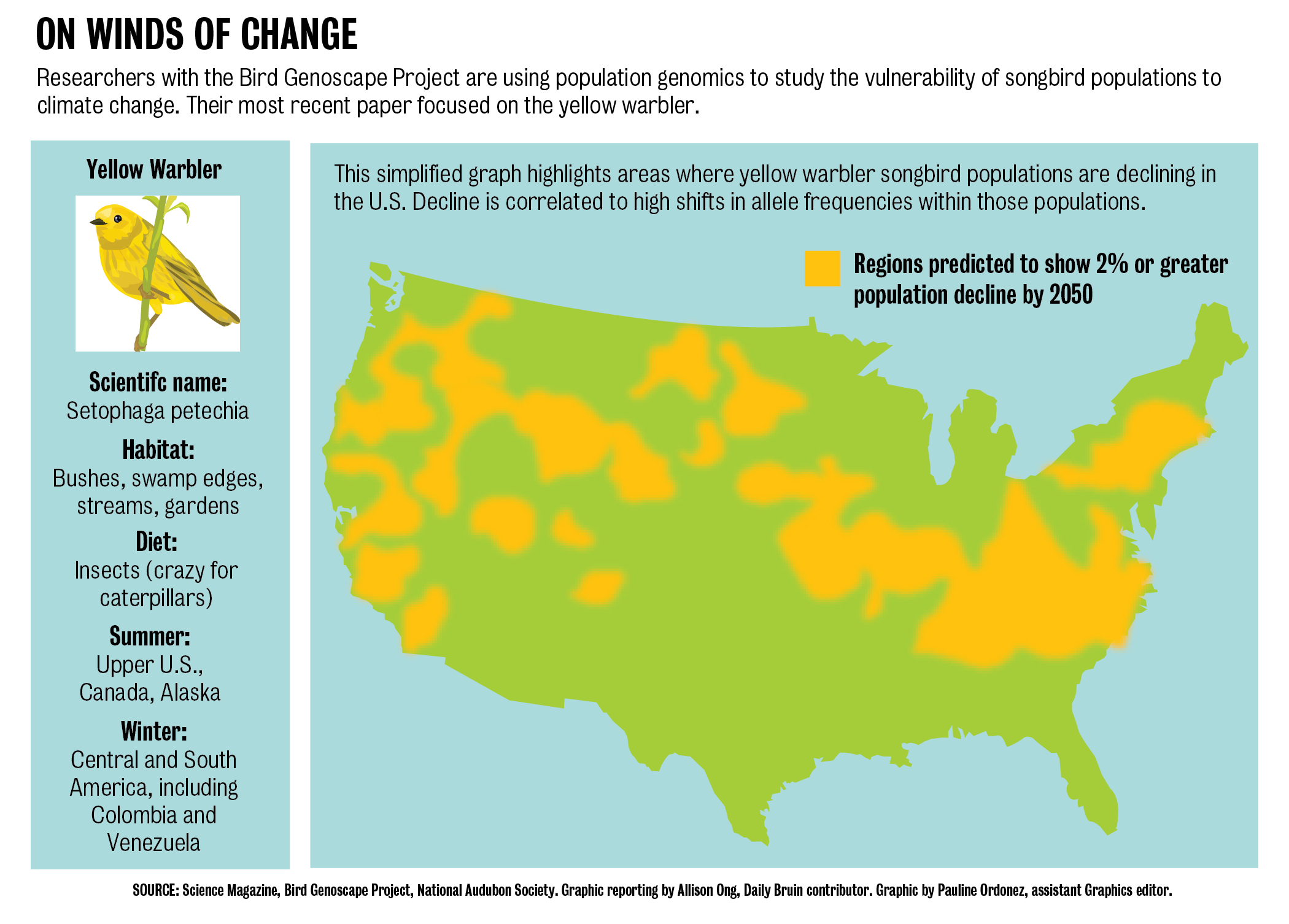 The Bird Genoscape Project, based at UCLA’s Center for Tropical Research, will analyze the migratory behavior of up to 100 songbird species using a combination of population genomics and environmental data, said Thomas Smith, the center’s founding director. Researchers at the center, along with scientists at UC Davis and Ohio State University, published a study Jan. 5 that showed how climate change may be contributing to declining populations of the North American yellow warbler.

Rachael Bay, the study’s lead author and a postdoctoral researcher at UC Davis, said the study aims to produce genoscapes for each bird species. Genoscapes are maps illustrating the genetic variation of a particular species across a geographic space and can provide insight into how the environment may be influencing its growth and genetic makeup, according to the project’s website.

Warblers are widespread throughout the U.S. and Canada, and migrate to South America in the winter season. For the study, the team first extracted warbler DNA from frozen samples, bones and feathers collected by researchers all over the country, including those who work at banding stations where birds are tagged for study in the wild, Bay said.

They then used advanced DNA sequencing to scan warbler genomes for single-nucleotide changes in the primary sequence, which can vary among populations and can act as markers of genetic variation. The team studied more than 10,000 of these variations across 229 warbler samples from 21 locations, according to the study.

Recent advancements in genomic technology that help scientists analyze DNA more efficiently and extensively have been integrated into many fields, including climate change research and fish stock management, Bay said.

“It’s fairly recent that we’ve been able to use genomic technology in natural populations. The human genome was not sequenced that long ago,” she added. “It’s an exciting time to be using that type of tech.”

The team also used computer programs to find a correlation between American environments and genetic variation in warbler populations. Bay said the team ranked populations on a scale of genomic vulnerability, based on how the birds’ genes would change as the birds adapted to climate predictions for the year 2050.

Bay said the team also used bird breeding surveys from the 1960s to predict how the number of warblers might change throughout the U.S. Combining this field data with computer data showed warblers in areas of high genomic vulnerability, such as in the Rocky Mountains, California’s Central Valley and the Great Lakes region, may already be declining.

Bay said that while additional studies are required to pinpoint the exact environmental causes of the population decline, changes in precipitation may be a factor. Temperature fluctuations, seasonal plant blooming and insect pollination schedules are all affected by climate change and may have also contributed to the decline. Warblers depend primarily on riparian, or water bank, habitats for breeding and insect feeding.

Kristen Ruegg, one of the study’s co-authors and an assistant adjunct professor at UCLA’s Institute of the Environment and Sustainability, said the Bird Genoscape Project has the potential to impact future policy and habitat management by identifying regions to prioritize conservation.

“Our goal is to communicate this information as broadly as possible – folks on the activism and policy side can take it from there,” she said.

Bay said the team plans to study other migratory bird species, including the willow flycatcher, to study potential patterns among different species. She said they hope to make more generalizable conclusions about the mechanisms driving these genomic changes, and may collaborate with researchers from outside fields.

Smith said the Center for Tropical Research is now applying other advanced bioinformatics and genomics to some of its biodiversity projects in Africa.

“It’s a really audacious project – this kind of information proves enormously important for the conservation of birds,” he said.