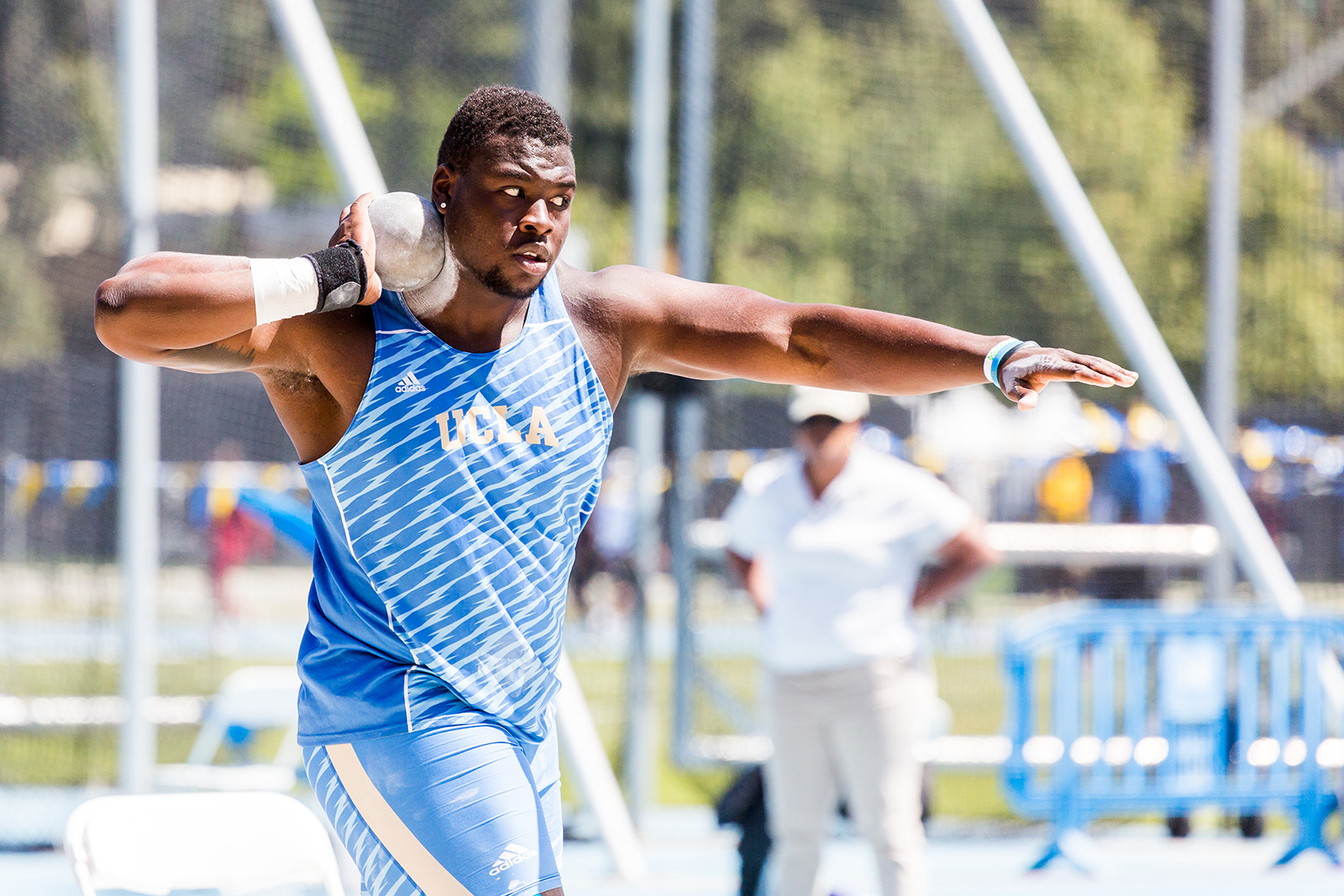 Junior thrower Dotun Ogundeji started off the 2018 season with a second-place finish. He fell only to fellow Bruin sophomore thrower Nate Esparza, who out-threw him by less than a meter. (Daily Bruin file photo)

The Bruins took a total of 44 athletes to the Dr. Martin Luther King Jr. Invitational over the weekend, and of them, 20 went to compete in field events.

Despite comprising less than half the team, the jumpers and throwers accounted for a majority of the Bruins’ top five finishes.

Track athletes took home three top-five placements from the weekend, but not one of those was an event win. The field events, on the other hand, saw 11 athletes crack the top five in New Mexico – five of those being first-place finishes.

The throws in particular saw a number of impressive debuts.

“For the throwers’ side, we had probably one of the deepest, if not one of the best, recruitment years for freshman throwers this year because we have (freshman) Alyssa Wilson,” said junior thrower Kai Wong, who threw for the first time in nearly two years this weekend.

Wilson made her collegiate debut for the Bruins  this weekend. Despite finishing a respectable fourth overall, throws coach John Frazier said she had a bad meet.

“When you have the pressure of being the high school record holder, you’re trying to throw far,” Frazier said. “She’s not used to losing … so basically it’s good to get this (pressure) out of her system before the bigger meets.”

Sophomore thrower Nate Esparza, who made his indoor debut, won the men’s shot put with a mark of 19.49 meters. He was followed closely by a fellow Bruin, redshirt junior thrower Dotun Ogundeji, who threw 19.37 meters over the weekend.

The duo tallied UCLA’s only first and second finish at the meet.

On her very first jump of the afternoon, Maduka leaped a distance of 13.74 meters – the best women’s indoor triple jump in UCLA history, and second all-time if including outdoor.

“We went into this meet with short approaches … because we were working on a specific aspect of the event,” said sprints coach Curtis Allen. “(Before the meet) I stated to all of my jumpers I was not that concerned about their overall performance marks as much as I was about them getting close to perfecting that one aspect we’re working on … the hop phase.”

Essentially, Allen is approaching the horizontal jumps in week-to-week segments. Last week the team focused on the first part of the jump – the hop.

This week the jumpers will move forward and practice something else – the step phase. Allen said all his phases will come together by the time the NCAA Indoor Championships roll around in early March.

Whatever his plan is, it seems to be working so far.