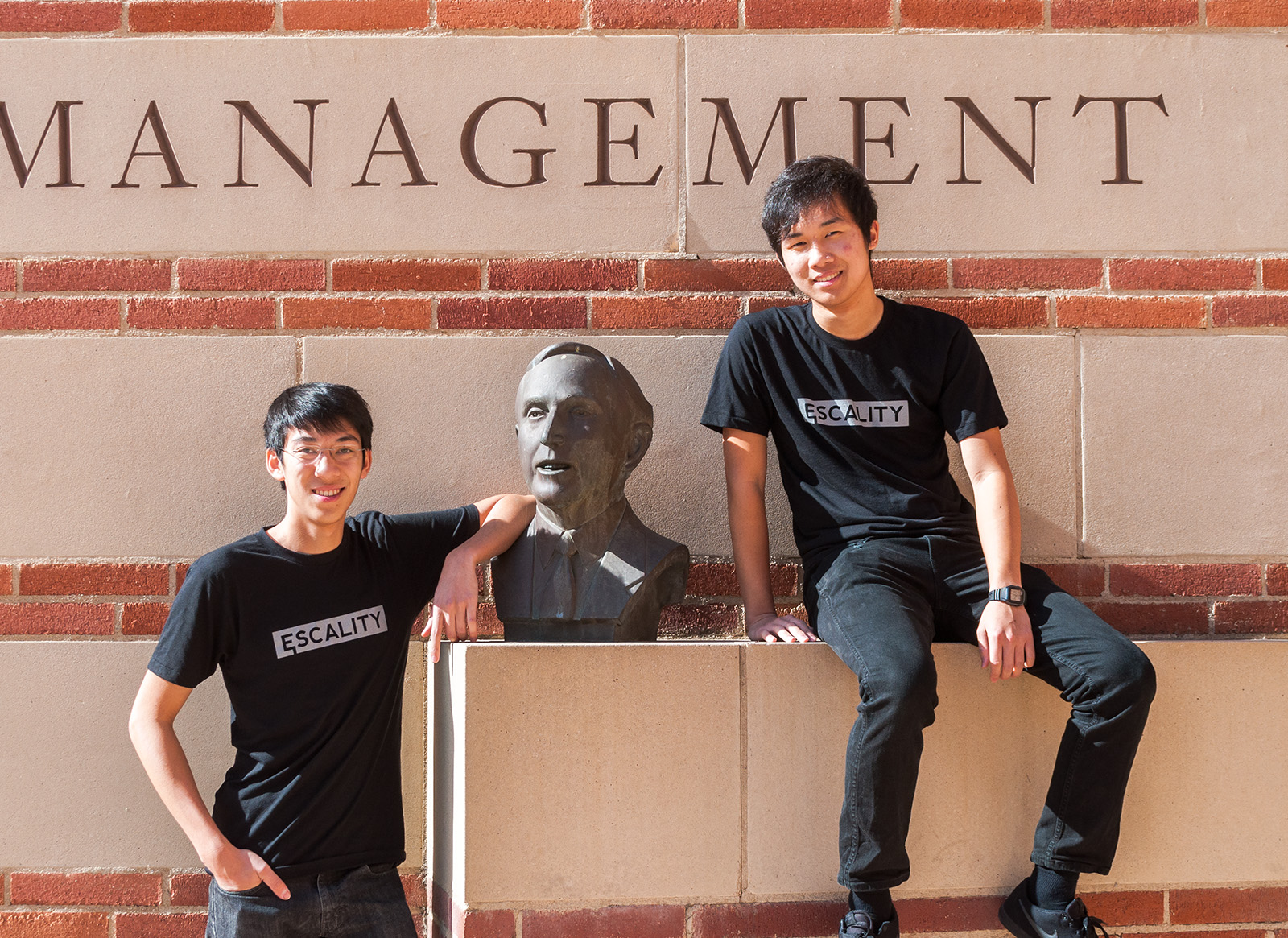 Alvin Vuong and Eric Qu helped found a startup called Escality, LLC and are part of the growing community of student entrepreneurs at UCLA.(Eda Gokcebay/Daily Bruin)

Alvin Vuong and Eric Qu had no business experience when they pitched their idea for an augmented reality game studio to the UCLA Startup Accelerator in 2017.

Less than eight months after being accepted to the accelerator’s summer program for student entrepreneurs, Vuong and Qu have established a company called Escality, LLC with their other co-founder, Hunter Gorczycki, a fourth-year computer science student. The company produces augmented reality content for multiple clients, and is developing games such as an augmented reality escape room.

“The accelerator provides free legal and startup counseling that really helped us get started,” said Qu, a fourth-year aerospace engineering student. “It helped us realize there’s more to do than just develop games – we learned to take on client work and expand our capabilities.”

Escality is part of a growing community of student startup businesses at UCLA. Vuong, who graduated in the fall with a computer science degree, and Qu said they think an increasing number of UCLA students want to be entrepreneurs and are coming up with ideas for startups.

Farhad Rostamian, a lecturer who teaches classes on entrepreneurship at the Anderson School of Management, said Los Angeles has become a growing center for startup companies because an increasing number of investors, lawyers, banks and incubators are providing funding and services to new businesses. He added the number of entrepreneurship clubs and programs at UCLA has increased in recent years.

“At UCLA we … have access to a lot of technology and a lot of innovation, as well as a business school that can help students kick (a business) off,” Rostamian said.

UCLA also has an entrepreneurship minor, which admitted its first students at the beginning of 2015 and has accepted 284 students so far, said Janel Munguia, the student advisor for the minor. She added about 110 students have graduated with the minor on their academic records.

“Two years ago we didn’t have these (resources), but now … they’re a thriving and growing ecosystem,” Rostamian said. “They have job openings, meetings, and they invite investors and companies, so students get to work and learn about all these possibilities and options.”

Because UCLA is a research institution, students with startup ideas have access to advising professors, incubators and classes that can increase the chances of their startup succeeding, Rostamian said.

“Of every hundred ideas, at the end about 15 of them become successful products,” Rostamian said. “But at UCLA, … when students launch, there is much less risk – the idea itself has been validated.”

Tim Connors, a fourth-year cognitive science student, founded his own startup business called SoCal Grad Club in 2017, now renamed Grad Street, to sell graduation caps and gowns at lower prices than the university. Connors said he thinks new entrepreneurship programs, such as the UCLA Anderson Venture Accelerator that launched in 2016, have helped more students start their own businesses and find resources for funding.

“From what I see, students at UCLA are higher caliber,” Connors said. “It seems like only about half the companies I’ve seen started around here aren’t operating any longer, which is really good statistically.”

Online resources and companies providing services to startup businesses have made it easier for students to pursue entrepreneurship with little money, Rostamian said.

Vuong and Qu said they used websites like LegalZoom and IncFile to learn how to establish their business as a limited liability corporation, and used an online database to find a tax professional when they began making a profit.

“I didn’t need that much money to bootstrap (Grad Street),” Connors said. “In 1990 you’d have to do everything yourself, but now there’s all this infrastructure. … There are fancy startups for every step of the supply chain, and other companies that help startups start up.”

The widespread use of phones and the rise of the app economy has made app development a popular field for student entrepreneurs, Rostamian said.

Connors said he thinks app startups are popular because most don’t require much capital, but they may be less successful in the long run.

“I think the startups that are mostly likely to be around years from now are things (other than apps), just because … those markets are a lot more complex to enter than people realize,” he said.

Students who create startups have to make sacrifices, such as investing money in their businesses rather than paying student loans, Connors added.

“I wouldn’t show up for a quiz because I had to be at the location handing out (graduation) gowns,” he said. “You have to have your priorities straight and accept that your grades will take a dip.”

Rostamian said he thinks millennials are more open to entrepreneurship.

“This generation is more risk-taking, thinking about changing the world. … That’s very strong at UCLA,” Rostamian said. “It’s not about money, it’s about being able to impact and change people’s lives.”