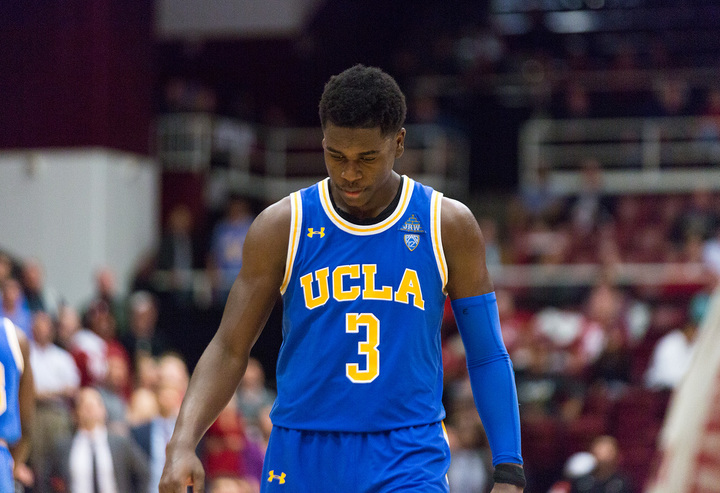 Aaron Holiday led the Bruins in points, but he couldn’t lead the Bruins to a victory. The junior point guard notched 22 points in UCLA men’s basketball loss to Oregon State on Thursday night.(Michael Zshornack/Photo editor)

For 17 games, offense was not a problem for the Bruins.

The Bruins, who did not shoot under 40 percent from the field in any of their first 17 games, did so for the second straight contest Thursday, finishing with a 37.9 percent mark from the field. They made just seven of their 23 3-point attempts.

The Bruins struggled from the start to score against the Beavers, though, connecting on just 34.5 percent of their field goal attempts in the first half and only improving by a little in the second half.

Junior guard Aaron Holiday, UCLA’s leading scorer this season at 18.9 points per game, delivered on the offensive end with 22 points, including 18 in the second half, but received little help.

Besides Holiday, only senior center Thomas Welsh reached double figures, and he did so on an inefficient 4-of-13 shooting line. Freshman guard Kris Wilkes, the team’s second-leading scorer on the year, was held scoreless in the first half and finished with nine points.

Freshman guard Jaylen Hands and redshirt sophomore guard Prince Ali, both of whom average double figures, combined to shoot just 3-of-14 from the field.

UCLA’s defense was strong, holding Oregon State to just 36.5 percent shooting for the game, and allowed the Bruins to grab a lead midway through the second half by holding the Beavers without a made field goal for a stretch of over five minutes.

But the defensive effort was marred throughout the night by poor defensive rebounding, with Oregon State grabbing a season-high 18 offensive boards en route to 15 second-chance points.

Welsh, who finished with 13 rebounds, was the only Bruin to record more than four boards on the game.

UCLA struggled at the end of each half, allowing Oregon State to close the first period on an 11-3 run and to close the game on a 10-3 run.

UCLA will have a chance to bounce back Saturday against Oregon.