UCLA men’s basketball to strive for victories after recent losses 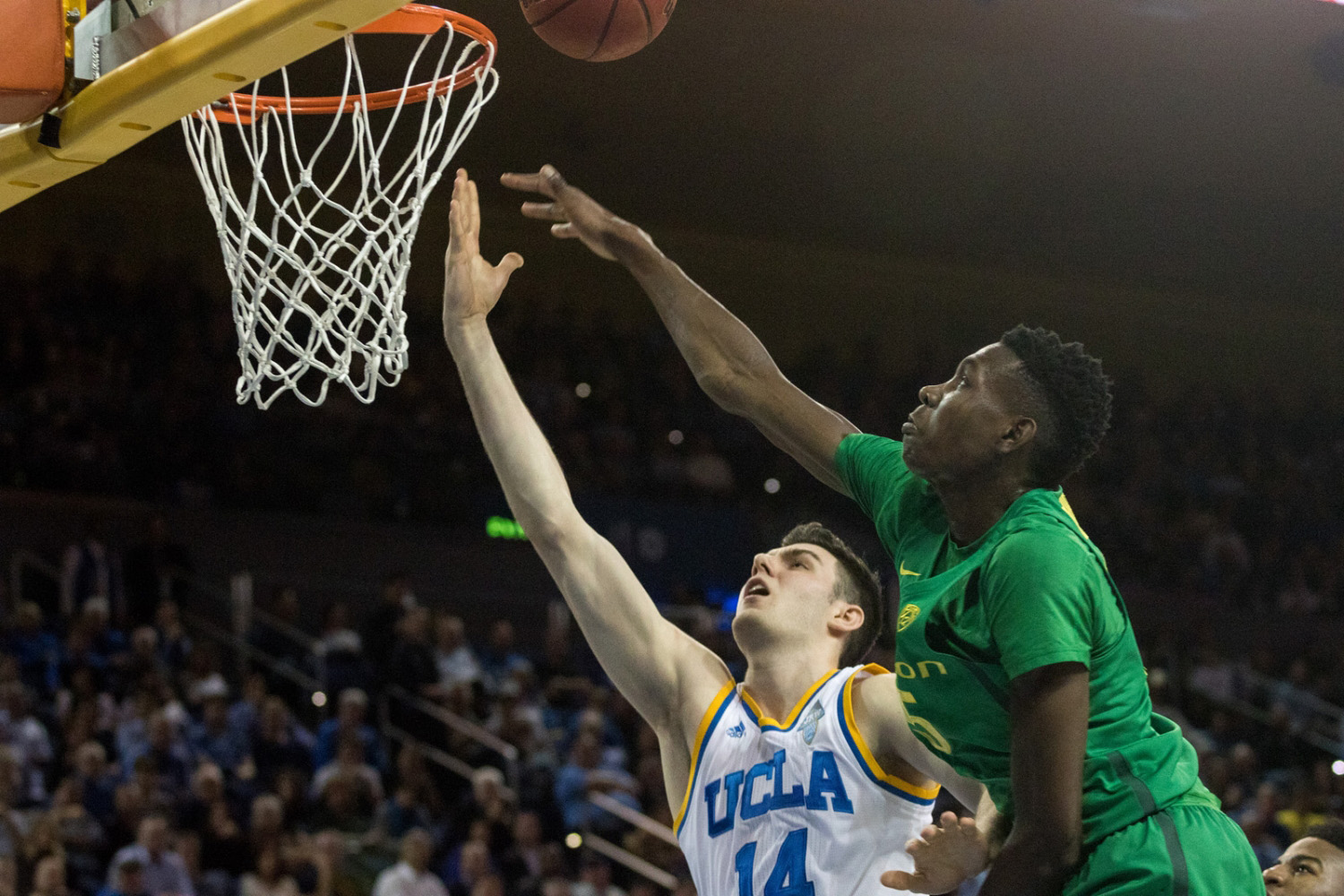 Last season, UCLA and Oregon split their two meetings, with the home team winning both games. The Ducks however, would eventually reach the Final Four while the Bruins exited in the Sweet 16. (Daily Bruin file photo)

It’s a big trip for the Bruins.

But the defeats at the hands of the Cardinal and Buffaloes – neither of whom rank as top-100 teams in the nation, per KenPom.com’s advanced metrics – have left the Bruins in need of a successful road trip.

“This is obviously a huge week for us,” said senior center Thomas Welsh on Tuesday. “We had a really great practice yesterday. I think we came in ready to work, which is important after a loss like that (against Colorado).”

The setback against Colorado, which coach Steve Alford called UCLA’s worst performance of the year, came on the heels of an encouraging victory over Utah, which Alford thought was his team’s strongest outing of the season.

“We did not perform at the level we had been performing at,” Alford said. “Our effort, our energy, our attention to detail in the first half was nowhere near where it had been in the past few weeks.”

UCLA will need to amend that in order to come up with wins against the two Oregon schools.

Oregon State is just 2-3 in Pac-12 play, but looked strong last weekend in single-digit road losses against both No. 14 Arizona and No. 16 Arizona State.

Oregon, which went to the Final Four last season but lost several key players to the NBA, pulled off a win over Arizona State and led with just over five minutes left before fading late against Arizona.

“We’re catching both of these teams on an upswing because both of them have been playing very well,” Alford said. “There’s an awful lot of us that are kind of (close) together in (the Pac-12).”

The trio combines for 48.0 points per game, nearly 65 percent of the team’s total scoring production.

“Those three are concerns,” Alford said. “Tres is very, very good, I think he’s one of the better players in our conference. I’ve always liked (Thompson Jr.), I think he’s a special player. And a guy that I think doesn’t get near the credit (deserved) is Eubanks.”

Tinkle, the son of Beaver coach Wayne Tinkle, is an all-around threat from the four spot, averaging 18.2 points, 7.4 rebounds and 3.5 assists, while Thompson Jr. is a deep threat who is currently shooting 37.5 percent from behind the arc en route to 16.5 points per game.

Eubanks’ contributions in the post, though, were what Alford harped on most extensively in Tuesday’s press conference. The 6-foot-10, 240-pounder is averaging nearly two blocks and two offensive rebounds a game to go with 13.3 points on 63 percent field goal shooting.

“He is a hard matchup,” Alford said. “He runs the floor, he’s extremely athletic, he’s a very good shot-blocker, so he’s a rim protector. And every year I’ve seen his offense get better and better in the low post.”

The matchup between UCLA and Oregon State will pit the Pac-12’s fastest-tempo team, per KenPom.com, against its slowest, meaning pace of play could be key in determining which side has the advantage.

UCLA, which at times has excelled with a fast-paced attack reminiscent of last year’s Lonzo Ball-led squad, will look to bounce back from a game in which Colorado stifled UCLA’s transition game, holding it to just 6 fast-break points.

“We like to play fast and obviously that’s a big part of our game,” said junior guard Aaron Holiday. “Getting out in transition, getting easy buckets would obviously help us a lot.”