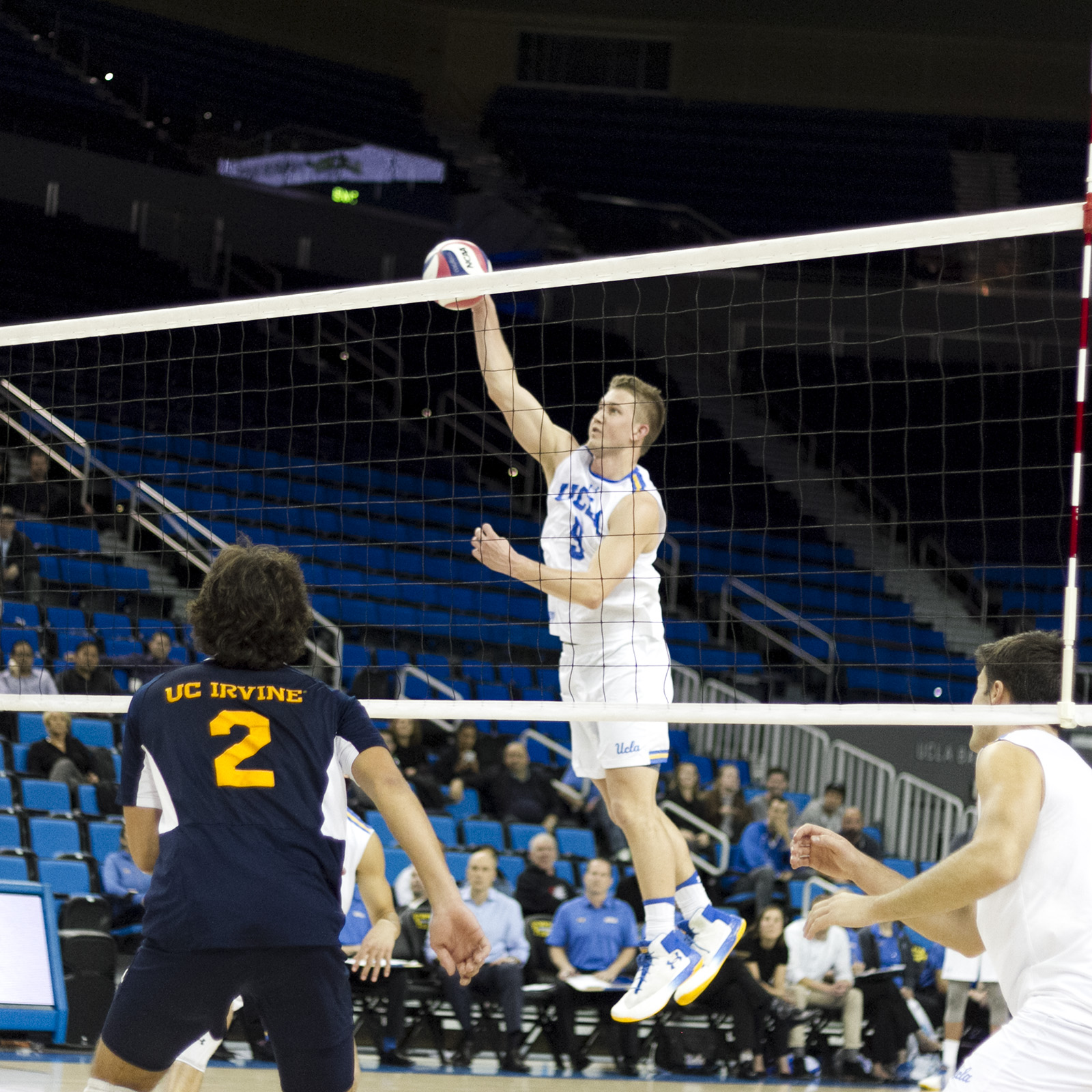 UCLA men’s volleyball found itself down two sets Wednesday night to UC Irvine – one set away from its first loss of the season.

Yet, the Bruins turned it around in the third set, improving their offensive connections and coming back from behind to oust the Anteaters in five sets.

“Going down two sets, it sucked … but it was kind of like motivation,” said senior opposite Christian Hessenauer. “We lost to them in the quarterfinals last year – and that was also motivation.”

The No. 3 Bruins (4-0, 0-0 MPSF) hosted the No. 5 Anteaters (2-1, 0-0 Big West) in Pauley Pavilion on Wednesday night, the first time the two teams faced each other since UC Irvine ended UCLA’s season last year.

Sophomore middle blocker Daenan Gyimah started the match with two ace serves. The Anteaters responded with two kills of their own to take the lead 6-4, however.

Neither team was able to take a decisive lead, but UC Irvine managed to stay just ahead of UCLA because of Bruin hitting errors and opposite Karl Apfelbach’s five kills. Apfelbach led the Anteaters with a total of 14 kills on the night.

“There were just 100 plays that I think we’re going to get better at over the course of time with training and more experience,” said coach John Speraw.

Service errors continued to prove problematic for UCLA, with the Bruins racking up four errors in the first 16 points of the game alone. UCLA’s 31 service errors were more than triple that of UC Irvine’s nine.

The Bruin offense picked up in the second set, but things remained a close race between the two teams.

Freshman outside hitter Colin Bailey logged a kill against UC Irvine to break a 7-7 tie. The Anteaters continued to utilize Apfelbach and defend against Bruin hitters with solid blocking at the net.

UCLA struggled to get past a big UC Irvine block, trailing as the Anteaters gained a 6-point lead. A service error by junior setter Micah Ma’a gave UC Irvine the final point it needed to take the second set 25-19.

“I think offense tends to be a little weak this time of year. The connection with (Ma’a) and the tempo just isn’t as tight as it needs to be,” Speraw said. “We need to play more in Pauley Pavilion. … We haven’t even had a practice in here. You’re setting that ball and it’s way different. So that might be part of it too.”

Senior JT Hatch played the first two sets as a libero, but switched to outside hitter in the third to replace fellow senior Jake Arnitz, who sat out after the second set. Hatch’s swings proved effective against UC Irvine, collecting nine kills after logging seven digs.

“(Hatch) is a great volleyball player and needs to be on the volleyball court for us,” Speraw said. “That switch that we did is something we’ve been working on. … I’m sure he was excited to get out there and go hit a ball and he did a great job at that.”

“We just have to pass the ball,” Hatch said. “They had a couple good, tough float serves we had to side out on.”

Set four started with the Bruins going on a run to put 6 points between themselves and the Anteaters, 14-8. Hessenauer found his rhythm against UC Irvine’s defenders, notching 13 kills on the night to pace UCLA along with Gyimah’s 13. The Bruins claimed a decisive fourth set 25-16.

Missry once again served an ace to start off the final set in favor of the Bruins. UC Irvine tied the set up again at 11 and then again at 14, but UCLA’s Gyimah, Hatch and Hessenauer all hammered the ball away to keep the energy with the Bruins – Ma’a fired a final ace to seal the win 16-14.

“We have to be a team that comes back and plays hard and doesn’t get down on ourselves,” Speraw said. “I think in that respect we should be very pleased with the way we handled that moment early in the season.”