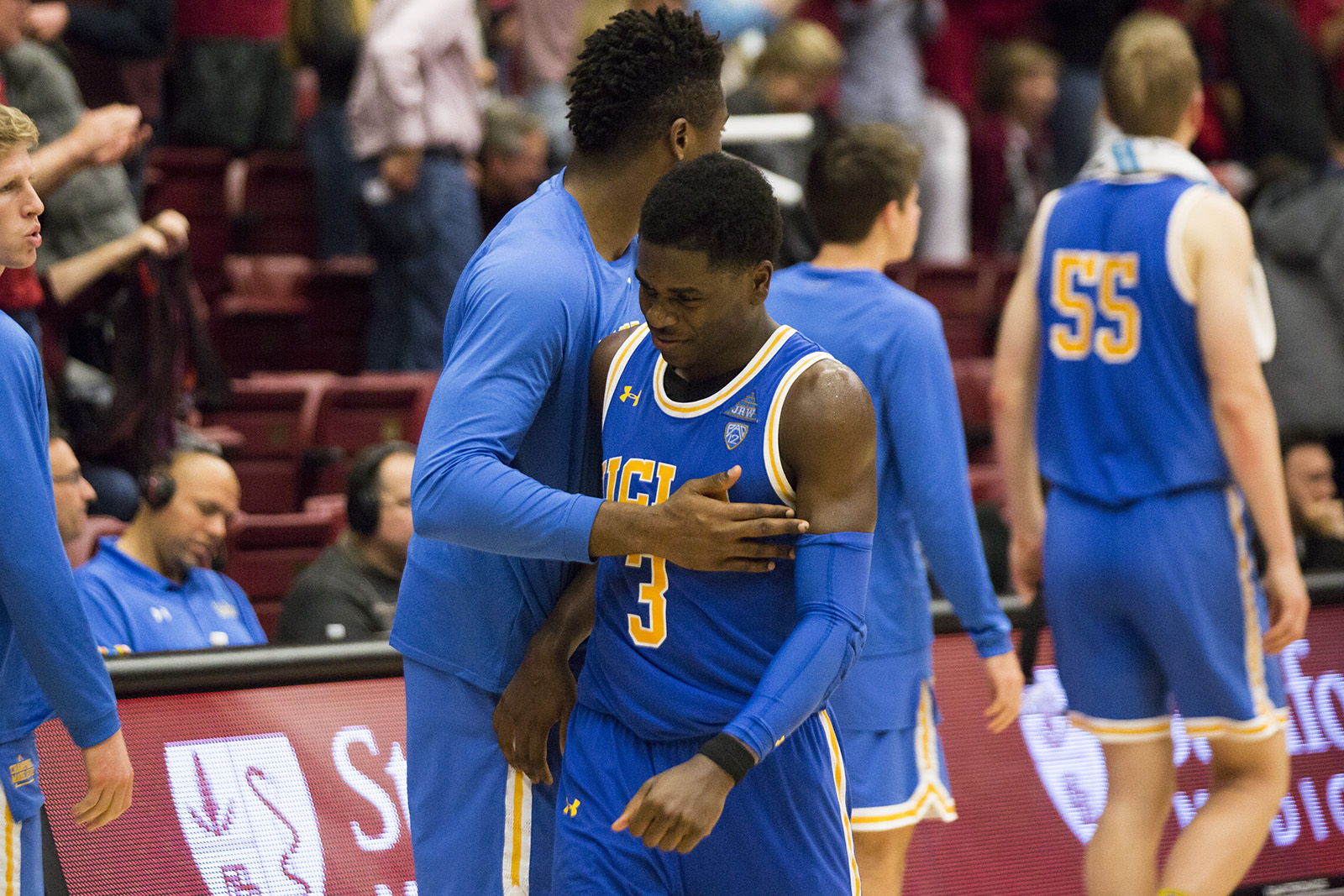 Aaron Holiday led the charge in multiple late-game runs for the Bruins, but the junior guard ultimately couldn’t carry UCLA to a win over Stanford. (Michael Zshornack/Photo editor)

Two games into Pac-12 play, the Bruins seemed to have put their free-throw woes behind them.

The Bruins missed seven of their final eight free throws in regulation before giving up a game-tying 3-pointer with five seconds left. They finished 19-of-35 from the line.

Junior guard Aaron Holiday paced UCLA with 31 points, 29 of which came after halftime.

It looked like Holiday had led the Bruins to win in the second half, scoring 22 points on 8-of-8 shooting in the period – including a driving layup that put the Bruins up 85-82 with 25 seconds left in regulation.

When Stanford guard Daejon Davis then missed a pair of free throws, UCLA seemed to have sealed the win. But redshirt sophomore guard Prince Ali misfired on two freebies of his own, giving the Cardinal a chance to knot up the game.

Stanford guard Dorian Pickens, who knocked down six triples on the night, caught the ball in the corner and used a shot fake that sent Holiday flying by him before he drilled the game-tying shot.

In the first overtime, Holiday produced a game-tying 3-pointer of his own, dribbling the court with five seconds left and finding space for a triple that sunk right as the buzzer sounded.

The shot breathed new life into the Bruins’ hopes, but they did little with them. They didn’t connect on a single field goal in the second overtime and didn’t score at all in the final two minutes and 45 seconds as the Cardinal closed on an 11-0 run to take the eight-point victory.

Stanford was led throughout the latter part of the game by Pickens and Davis, who combined for 38 points after halftime.

The Cardinal won the battle of the boards, out-rebounding UCLA 53-42 on the game. The Bruins’ senior center, Thomas Welsh, injured his nose in the first half, exiting the game but returning later in the half wearing a different jersey number – No. 55. In the second half, Welsh wore a mask to protect against further damage.

Welsh received three stitches to address the injury, reported Ben Bolch of the Los Angeles Times. He fouled out at the end of the first overtime, finishing with eight points and 10 rebounds.

The first half was relatively even, with Stanford controlling play at times thanks to big man Reid Travis, who put up 14 points and seven boards in the period. UCLA scored the final five points of the half, though, to take a five-point lead into halftime.

The Bruins then came out strong in the second half, with foul trouble for Travis and a relentless scoring burst from Holiday helping produce a lead as large as 13 points.

It shouldn’t have been a tough lead to protect, but the Bruins did have to make their free throws.

They didn’t and paid the price.