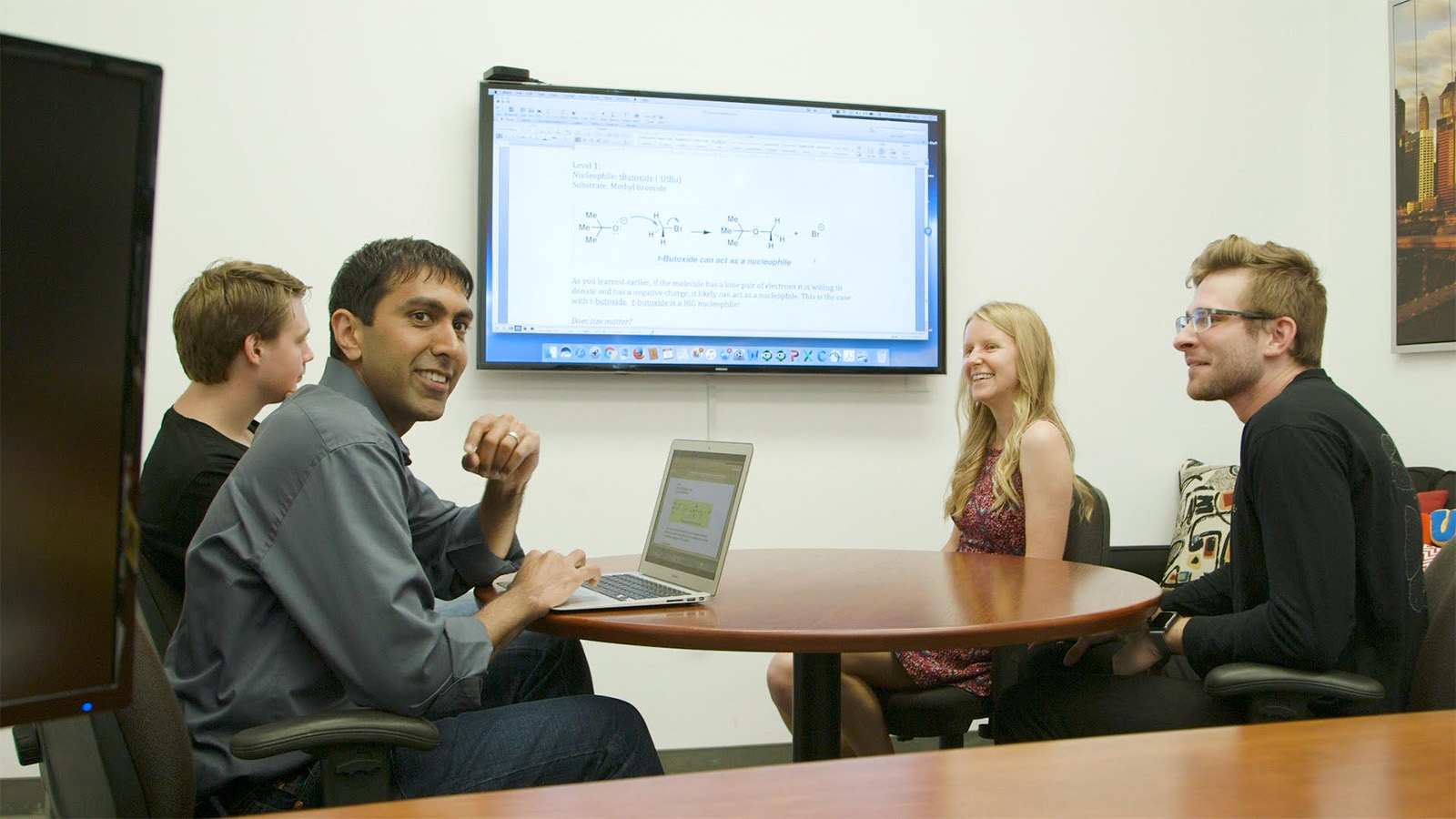 A chemistry professor and his students are launching an app that teaches common organic chemistry concepts through a gameplay similar to that of “Angry Birds.” (Photo courtesy of Alexander Khambir/Course Hero)

A swipe of the finger across an iPhone screen launches molecules at targets through the open neck of an Erlenmeyer flask in an educational app a UCLA chemistry professor developed with his students.

Neil Garg, along with several former undergraduate chemistry students, created an app that teaches standard concepts in organic chemistry. “Backside Attack,” named after the chemical reaction featured in the app, will be available for download on iOS later this month for free.

“A few students (from my Chemistry 14D: “Organic Reactions and Pharmaceuticals” course) mentioned they wanted to do something that would impact science education,” Garg said. “We initially had no direction or experience, but we knew we wanted to create an app.”

After receiving input from former students, Garg and his team began drawing rough blueprint sketches of the app interface in fall 2015 that were later converted into computer-based software by a graphic designer and programmer.

The app itself leads players through several levels. As they complete each level, players move on to learn a slightly more complex or difficult concept, Garg said.

One level shows a syringe filled with a particular molecule that players need to shoot inside a flask containing another molecule it will react with. As players move through the levels, the size of the flask’s opening becomes smaller and more difficult to aim at, making it harder to complete the level. Another level requires players to draw the correct molecular mechanism before they can advance.

Garg added each level has an option for the student to learn more about the concept being taught by accessing a paragraph explanation of the subject. The app then prompts students to answer a question that would assess whether they had learned the concept.

Stefan Prisacaru, a member of the app development team who graduated from UCLA this year, said helping build the app has made him more interested in science education. He added it made him realize that science courses do not just have to be about getting a high grade and could be applied outside the classroom.

“Now, I realize you study because you can impact the world around you – especially now that I see how applicable chemistry is to everyday life,” he said.

Prisacaru said he is now interested in pursuing other projects in science education, such as creating a medical coloring book that would teach people basic health concepts, including what cholesterol is or how exactly smoking impacts the body.

“Science doesn’t have to be scary,” Prisacaru said.

Tara Kappel, another member of the app development team who graduated from UCLA this year, said she helped provide the perspective of students who had just learned organic chemistry. She added that many students are intimidated by organic chemistry’s reputation as a difficult course.

“We wanted it to be interesting, engaging and accessible to a lot of people, and to show people that organic chemistry isn’t that difficult to learn,” Kappel said.

Kappel added she thinks the most difficult aspect of building the app was catering to students who had never learned organic chemistry, and those who were in the process of learning the subject.

“We were always trying to consider all the different ways students can learn,” she said.

Garg said he plans to advertise the app through a social media campaign and by reaching out to organic chemistry faculty at UCLA and other universities. He added if the app is well received he plans to make it accessible on other devices or possibly create more apps that teach different chemical reactions.

“It has been really cool to see students engage in a challenging and creative exercise outside of the classroom,” Garg said. “This is students at their best, and we’re really excited to get it out there.”