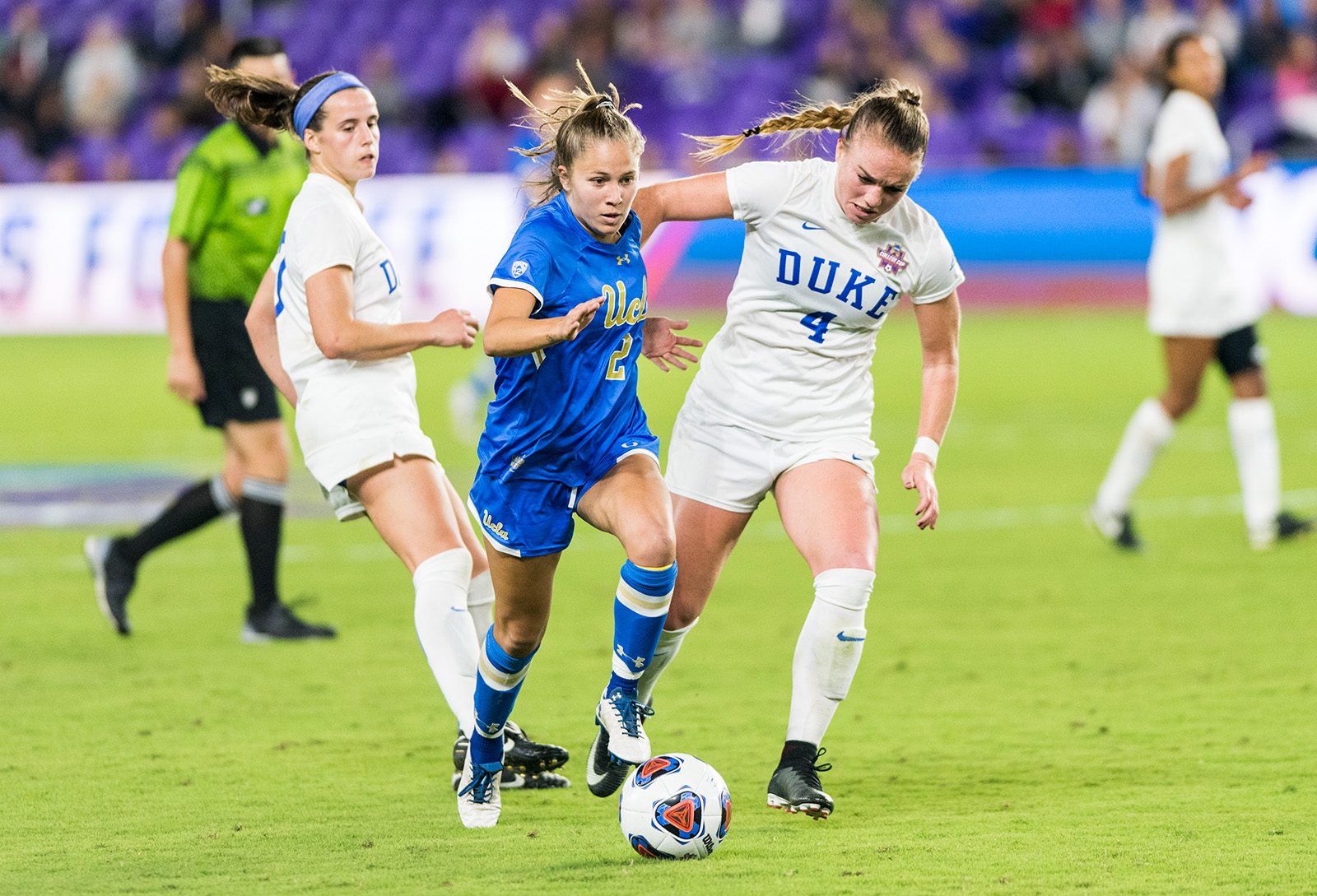 Freshman forward Ashley Sanchez set a freshman record for her 12 assists in her debut season. The forward came to Westwood as the top recruit in the 2017 incoming class, with her U.S. national team experience. (Axel Lopez/Daily Bruin)

UCLA women’s soccer may have just fallen short of a national championship this year, but the young talent on its roster breeds hope for upcoming seasons.

The Bruins finished their season with a record of 19-3-3 after losing 3-2 to Stanford (24-1-0) in the national championships last weekend at Orlando City Stadium.

Although unable to overcome the one-point deficit, UCLA did score two goals in four minutes after the Cardinal had played 487 straight minutes without allowing a single goal.

Though six seniors are graduating from this year’s squad, UCLA’s starting lineup from the NCAA Tournament will remain mostly intact. Redshirt senior defense Zoey Goralski and senior defender MacKenzie Cerda graduate, but nine of the 11 starters will return in 2018.

“They’ve got incredibly talented rosters from UCLA’s youth national team players and Canadian (sophomore midfielder) Jessie Fleming,” said ESPN commentator Julie Foudy, who covered the entirety of the weekend’s College Cup. “That’s what I really love most about the College Cup – it’s a glimpse into the future for this country and for women’s soccer in general.”

Members of the freshman class made an immediate impact upon starting their collegiate soccer careers, with seven freshmen claiming starting positions in at least one game this season.

“Every class that comes through UCLA women’s soccer is one of the top in the country, but this one is pretty special,” said redshirt senior defender Claire Winter earlier in the season.

Freshman forward Ashley Sanchez came to Westwood as the top recruit of the 2017 recruiting class, according to Top Drawer Soccer. The rookie set a new UCLA freshman record with her dozen assists this season, and is one of only four Bruins in program history to log 12 assists in one season.

“(Sanchez) has played on every youth national team and now we get a chance to see in her freshman season how she can continue to perform on the biggest stage,” Foudy said. “She has that experience and confidence.”

Two of UCLA’s key assets that will stay on the roster are junior forward Hailie Mace and Fleming.

Both Mace and Fleming were named to the All-Tournament Team following the College Cup. The pair are both First-Team All-Americans and semifinalists for the Missouri Athletic Club Hermann Trophy as well.

This is only the fifth time that the program has had two first-team selections in one year.

“Hailie Mace is an awesome story,” Foudy said. “Her having not really been recruited and (coach) Amanda (Cromwell) seeing a video of her and being like ‘Oh my gosh, who is this kid. … Here’s a kid who didn’t go through the normal channels and played multiple sports.”

Cromwell will return for her sixth season in 2018. Cromwell is only the third female head coach to win an NCAA championship in women’s soccer, with the other two being Florida’s Becky Burleigh and Penn State’s Erica (Walsh) Dambach.

Following UCLA’s semifinals win over Duke, Cromwell was asked about her program’s success despite losing the 2016 season’s top prospect Mal Pugh to the U.S. national team in April.

“That was a blow. What she would bring to the table was undeniable. Now we have (redshirt sophomore midfielder) Anika Rodriguez stepping up in tremendous ways,” Cromwell said. “Counting on (Sanchez) and (Mace) scoring, I don’t know how many, 15 goals … we did get a lot of other players to flourish and to come into their own.”

The Bruins were also among the first NCAA teams to kneel during the playing of the national anthem this fall. A number of UCLA coaches and players knelt at different games throughout their season, beginning with their Oregon match on Sept. 28.

Seven Bruins took a knee during either a part or the entirety of the singing of the National Anthem before playing Stanford in the championship match at Orlando City Stadium.

“We discussed it as a team that it was each individual’s choice, but as a team we’re still connected,” Fleming said in October. “If you look at us, everyone’s touching someone. I think it’s pretty cool that we’re able to do this at UCLA.”