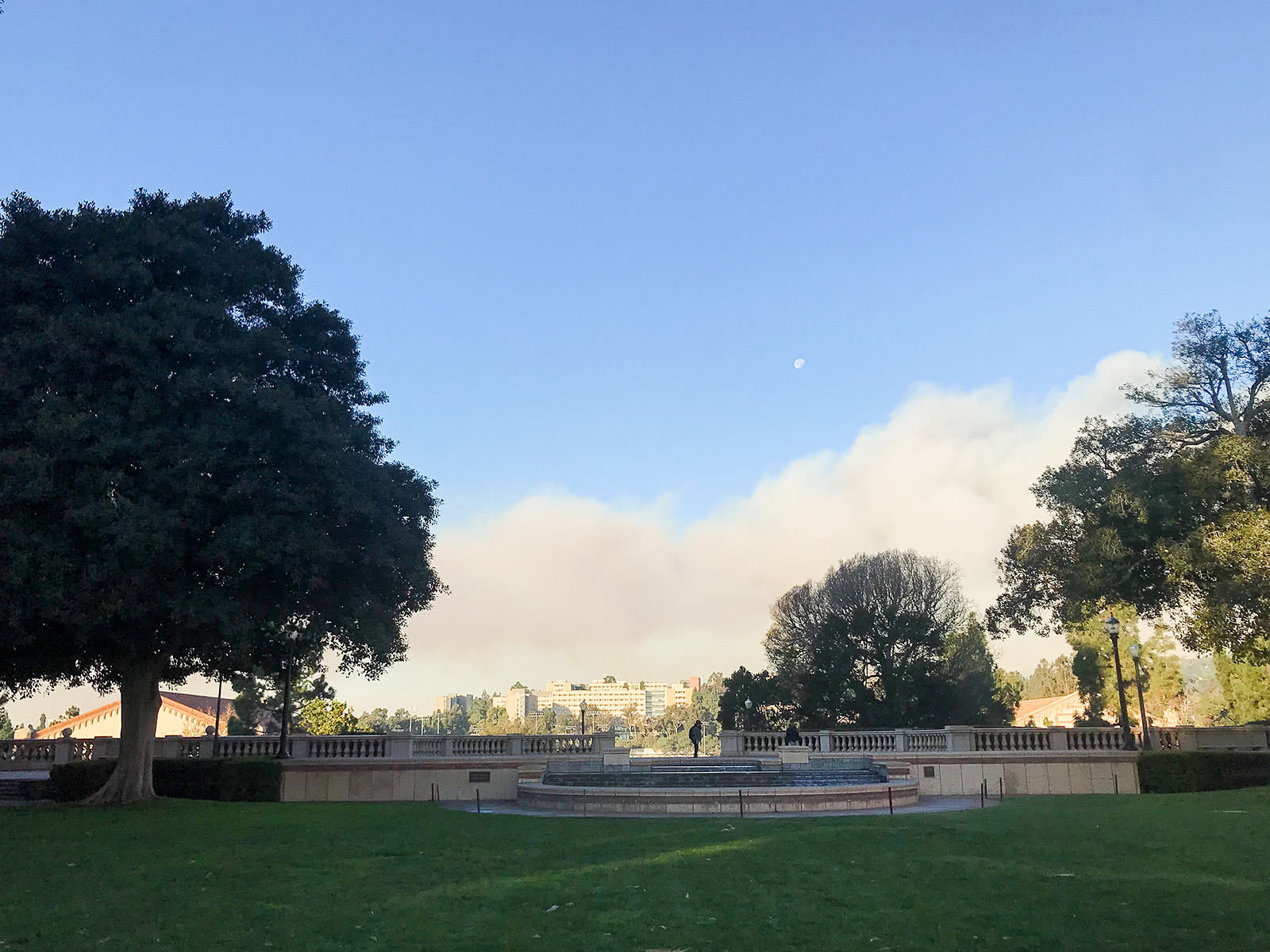 A fire burned in the Bel-Air area near the UCLA campus Wednesday and Thursday. (Kristie-Valerie Hoang/Assistant Photo editor)

UCLA resumed classes and campus activities Friday, following a fire that burned through Bel-Air on Wednesday and Thursday.

The university canceled all classes that began after noon Wednesday and told students, staff and faculty not to come to campus. Classes remained canceled Thursday, following a statement on UCLA’s website. A BruinAlert released at 3:39 p.m. Thursday indicated classes would resume Friday.

UCLA officials canceled class Thursday so they could have time to assess logistical issues for finals week. The university decided to resume classes Friday because Los Angeles Fire Department officials believed they would contain the fire soon, according to the BruinAlert.

Residents living in the area south of Mulholland Drive, east of the 405, north of Sunset Boulevard and west of Roscomare Road have been ordered to evacuate, according to the LAFD. Evacuees near the Westwood area can take refuge in the Westwood Recreation Center located at 1350 S. Sepulveda Blvd., according to an LAFD release.

In some areas, including Bel Terrace and all roads between Sunset Boulevard and Bellagio Road, evacuation orders were lifted as of 8 p.m. Thursday. However, other areas will remain closed until more of the fire is contained.

Several buildings on the Hill, including Rieber Hall, Bruin Cafe, Canyon Point and Sproul Hall, were without power Wednesday, as well as some apartment buildings in the North Village. Power was restored in many areas by 12:05 p.m. and the outage was unrelated to the fire, according to the Los Angeles Department of Water and Power. LADWP restored power to all Medical Plaza buildings by Wednesday afternoon.

Nurit Katz, UCLA’s chief sustainability officer, said LADWP had experienced an outage. She added that generators on campus were not affected by the fire and that UCLA’s cogeneration plant was running. Because UCLA was only operating on internal power, the campus needed to cut power to nonessential buildings to restore power to medical and critical facilities, according to a BruinAlert.

LADWP spokesperson Kim Hughes said power lines were knocked off their poles in the Sawtelle area on Wednesday, which prevented power from reaching UCLA’s campus.

UCLA men’s basketball did not play the University of Montana at Pauley Pavilion on Wednesday night, according to a release from UCLA Athletics. UCLA football practice was also canceled because of poor air quality.

Air masks were being distributed by the Ashe Student Health and Wellness Center to help protect students from the smoke.

Walid Ghurabi, medical director of emergency services at the UCLA Santa Monica Health Center, said although over-the-counter masks can help block large particles, they do not block microscopic particles from the smoke.

He added UCLA hospitals have powerful air filters to keep patients safe and the general public should stay indoors to avoid harmful microparticles in the air.

“Children, the elderly and those with respiratory and lung issues are especially vulnerable and should not really be outside at all,” he said.

Clayton Spivey, a third-year political science student, said he came to campus for work and for class before UCLA officially canceled all classes Wednesday. He added he thinks it was necessary for UCLA to cancel classes because conditions on campus were harmful to students.

“Our health is more important than whether you have a final review session,” he said.

Sienna Cabrera, a second-year biochemistry student who lives on the Hill, said UCLA canceling classes Wednesday and Thursday made it difficult to study for her final.

“There’s some new material I learned that’s vital to the final, and to not have access to office hours and my professor (on Wednesday) does cause an inconvenience,” Cabrera said. “But in the end, safety is more important for everyone.”

Marcus Weiss, a second-year biology student, said he was worried because he was not sure where to go if he needed to leave campus. He said he thinks the fire added to students’ stress as they prepare for finals, especially for students with families and homes in areas affected by the fire.

“For some of them, are they going to have a home to come back to?” Weiss said. “I’m sure it’s weighing hard on a lot of people’s minds.”

Sylvie Oang, a first-year psychobiology student, said she appreciated the constant updates from UCLA, but she does not think everyone was equally informed about the situation.

“My TA still sent out an email saying class is still going on even after (UCLA canceled all classes after noon Wednesday) and then sent out another saying we’re not getting confirmation,” Oang said. “The information isn’t being conveyed completely.”

Dec. 8, 1:19 p.m.: This article was updated with information regarding the progress of the fire’s containment and the lifting of parts of the evacuation zone.

Dec. 7, 5:50 p.m.: This article was updated with information regarding the progress of the fire’s containment.

Dec. 7, 3:55 p.m.: This article was updated with information regarding UCLA’s plans to resume class Friday.

Dec. 7, 12:16 p.m.: This article was updated with information regarding the progress of the fire’s containment.

Dec. 7, 10:06 a.m.: This article was updated with information regarding firefighters being at UCLA to use showers on campus.

Dec. 7, 9:01 a.m.: This article was updated with information regarding the UCLA School of Law’s plans to continue with finals Thursday.

Dec. 7, 12:46 a.m.: This article was updated with information regarding UCLA’s plans to cancel class Thursday.

This article was originally published on Dec. 6 at 8:36 a.m.