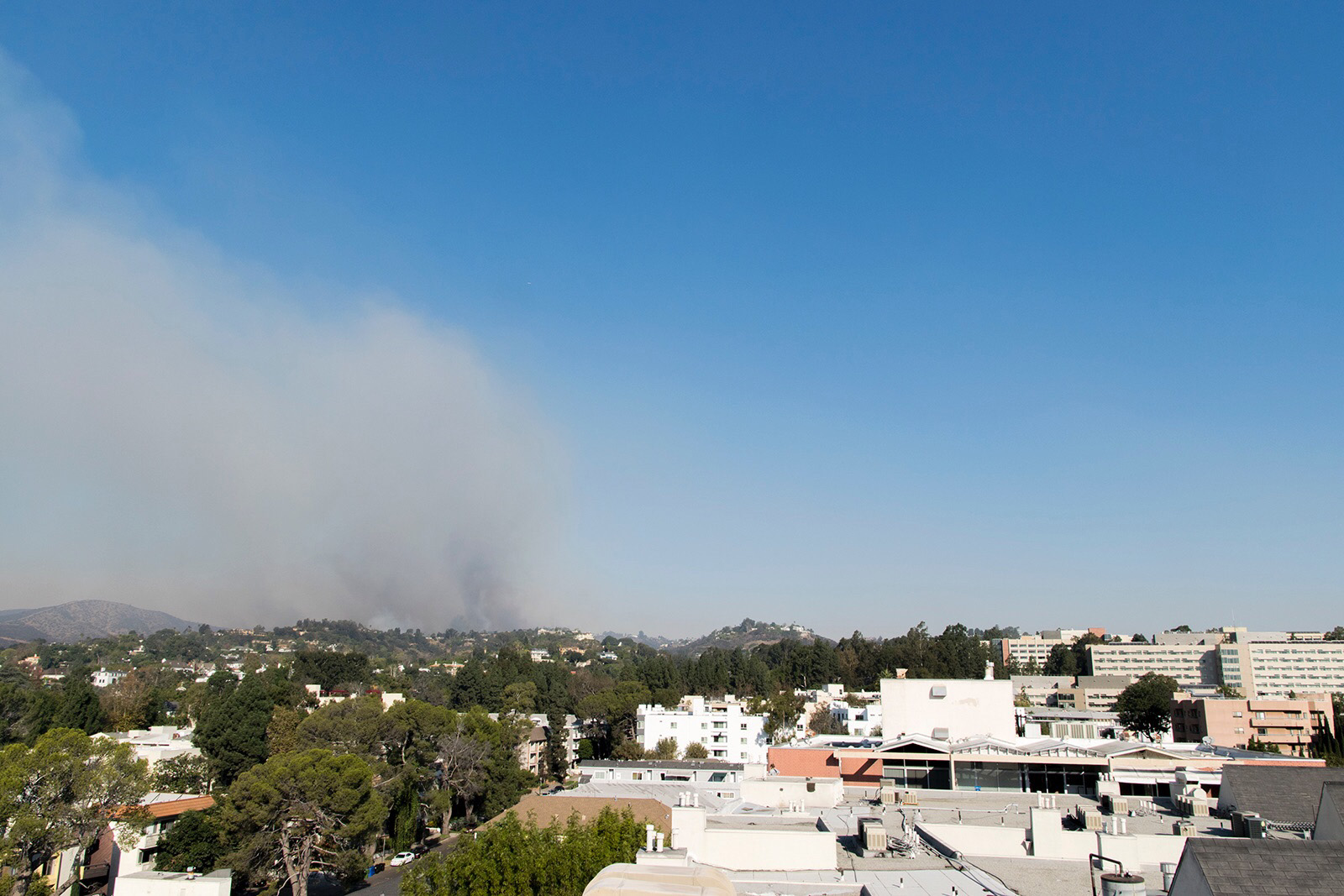 UCLA canceled Thursday classes because of a fire burning in the Bel-Air area near UCLA. Several student leaders have said they think UCLA did not properly respond to the fire. (Michael Zshornack/Daily Bruin)

Some student leaders said they think the UCLA administration’s response to the Skirball fire was inefficient and that the decision to cancel Thursday classes could have been made earlier.

The fire, originating near the I-405 Freeway around 4 a.m., burned through Bel-Air on Wednesday, prompting the university to cancel all classes that began on or after noon. An initial BruinAlert released at 4:44 p.m. Wednesday said normal courses and on-campus services would resume Thursday. However, a later BruinAlert, released after midnight, indicated classes would be canceled Thursday.

UCLA canceled classes to allow officials to assess logistical issues prior to finals week, according to a university statement. The statement added the campus is safe and is outside the evacuation area.

“The alerts were sent out late because (students) made it apparent to the university that it wouldn’t be productive to risk having classes today,” Skiles said.

The Undergraduate Students Association Council and Graduate Students Association also collected student signatures Wednesday night for a letter calling on the administration to cancel classes until conditions from the fire are stabilized, accommodate students who have finals this week and review its emergency management procedures. The letter had received 7,589 signatures as of Thursday morning, Skiles said.

Skiles said BruinAlerts sent in the morning that stated faculty and staff should report to work if possible were vague and could have pressured some faculty to report to work despite health and safety concerns.

“Some faculty supervisors will read that alert and interpret it differently and ask (teaching assistants) to come to work today … while other faculty that work with research in a lab might require all student staff to come to work,” Skiles said.

Skiles said he thinks the BruinAlert system did not effectively communicate timely information to students. The alert indicating that Wednesday’s afternoon classes would be canceled was released at about 11 a.m.

“The whole point of canceling classes is so students didn’t have to come to campus, in spite of the 405 being closed or walking through the smoke-filled Westwood,” Skiles said.

Divya Sharma, Academic Affairs commissioner, said he thinks the university is not prepared to handle emergency situations because the BruinAlert canceling classes went out after many students were already on campus.

“We’ve seen a shooting happen on campus, where administration did not respond quickly to the needs of students,” Sharma said. “And with the fire happening, there is no emergency preparedness.”

Sharma added he thinks the alerts should have included information to better prepare students for an evacuation and how to stay safe from the fire.

Nathan Glovinsky, one of the undergraduate student representatives on the 2016 Campus Safety Task Force, which was established after the shooting in June 2016 to better prepare UCLA for emergency situations, said he thinks students should not be put in a position to choose between their grades, safety and mental health.

Glovinsky, a third-year history student, added he thinks the university’s responses to emergency situations communicated through BruinAlert should offer more flexibility for students who choose to take additional precautionary measures for their health or safety.

“In the BruinAlerts, we never really received an acknowledgement that if students wanted to evacuate personally, that there would be no penalty,” he said. “A lot of students were uncomfortable … doing anything because they didn’t want to leave campus and face an academic penalty.”

1:10 p.m.: This article was updated with comments from Skiles and Sharma.